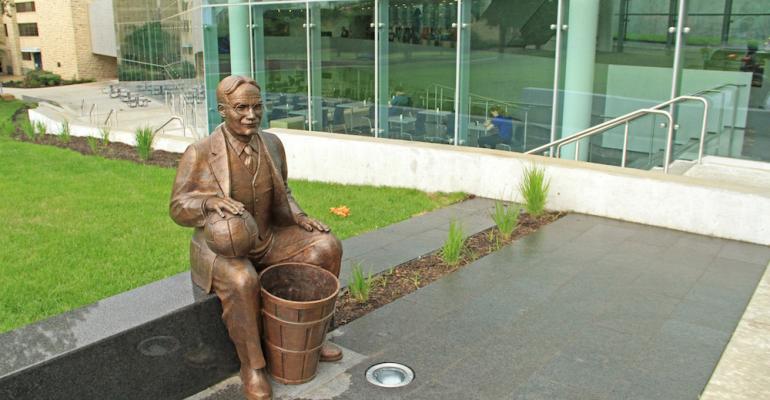 The University of Kansas has one of the most storied college basketball programs in history. And now, it’s also home to James Naismith's original "Rules of Basketball," which can be found inside a brand-new $18 million dining center.

“Because of our proximity to Kansas City we knew we wanted a barbecue concept in DeBruce,” says Mark Petrino, director of dining. “We also wanted a churrasco grill that would appeal to athletes as well as Brella’s, a deli/wrap outlet that is our most popular concept on campus.”

The “Rules” live on the second floor of the three-story glass building with other KU and college basketball memorabilia. Also on the second floor is The Roasterie, a coffee bar featuring flavored coffees, espressos and other specialty coffee drinks, along with desserts and prepared sandwiches and salads. The second floor has a bridge walkway connecting it to the iconic Allen Fieldhouse, home of the basketball team.

On the third floor of The DeBruce Center is a private dining location strictly for the men’s and women’s basketball teams.

“They requested a lot of monitors for watching game film, booths and chairs that are larger to accommodate for the height of the players as well as plenty of made-to-order options, an abundant salad bar, a hydration table and no deep fryers,” Petrino says.

The building, which officially opened April 18, is also used for gatherings and events serving the campus community.

“The first month we did three times the volume of business than we had been doing in the Burge,” says Petrino, referencing the dining outlet The DeBruce Center ultimately replaced.