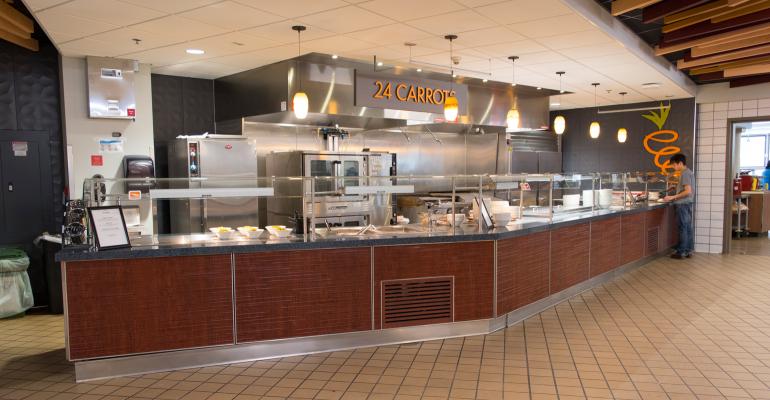 Bringing the North Campus dining facility into alignment with other renovated facilities has helped Michigan provide the same level of service and variety.

This is no small feat considering Michigan has one of the nation’s largest college dining operations with nine dining halls, 24 markets and cafés, a staff of over 300, around 9,000 on-campus meal plans and 3,000 off-campus meal plans. “One of the best features of the new Michigan dining culture is that it is ‘food forward,’ incorporating better nutrition, food safety, a greater variety of ingredients and an understanding of the best standards in the business,” says Steve Mangan, director of dining who came to the school in 2014 after serving as resident district manager at Northwestern University in Evanston, Ill. “We believe the campuswide renovations improve morale for the students and increase productivity when studying because of the more positive, healthy atmosphere.”

The latest renovation at Michigan was in its Bursley Hall, located on north campus, where much of the general incoming class lives. The work at Bursley included architectural, electrical and mechanical work. The work began immediately as students left at the end of the winter term in April. There was a short window of time where there was no foodservice needed during the month of May, but summer programs soon started and Michigan needed to continue to provide for both academic programs and summer camps.

“Time was the greatest challenge during construction,” says Mangan. “With Bursley being the only residential unit on north campus we needed to remain open during all the construction.”

As such, there were very limited cooking facilities, so Michigan got creative with menus and preparation using outdoor gas grills and some heat-and-serve items. The renovations to Bursley were finished over the summer and the hall opened for the start of the 2016-2017 school year.

New to Bursley are stations like the Olive Branch, which serves halal offerings such as spicy Tunisian couscous stew and vegan pasta primavera; and 24 Carrot, which offers dishes like Malaysian vegetable coconut curry and spicy black bean burgers.

“Bursley is able to offer more cook-to-order options with the Two Oceans station as well as have stations that are able to be strictly branded to both vegetarian and halal,” says Mangan. “This was done without losing the student favorites of cooked-to-order, fresh burgers and pizza. The renovation also included work to aid in our sustainability efforts allowing us to add post-consumer composting.” Bursley’s menu was able to be expanded to offer a lot more variety as well as allow students to engage with the cooking and serving staff to both customize plates and gain feedback.

“Some air handling work was needed for air balancing of the new exhaust hoods with those existing in back and there was a walk-in cooler added,” says Mangan. “This was a necessity as we lost cooler space in the redesign. This cooler went into what was a food prep room. We also added a new dish machine to replace one that had served us for several years.” New equipment including char grills, steamers and a wok stations were purchased as well. “All of this was necessary to bring the level of foodservice up to today's standards and offer healthier options,” says Mangan.

The response from students to Bursley has been very positive thus far.

“The students are truly amazed at what was accomplished in such a short window of time and that the renovation was a lot more than just a fresh coat of paint,” says Mangan. “The room is essentially the same size, but the added textures and finishes have given it a very warm and welcoming feel. We still hear comments from students who were with us in the past make statements of disbelief that it is the same place.”