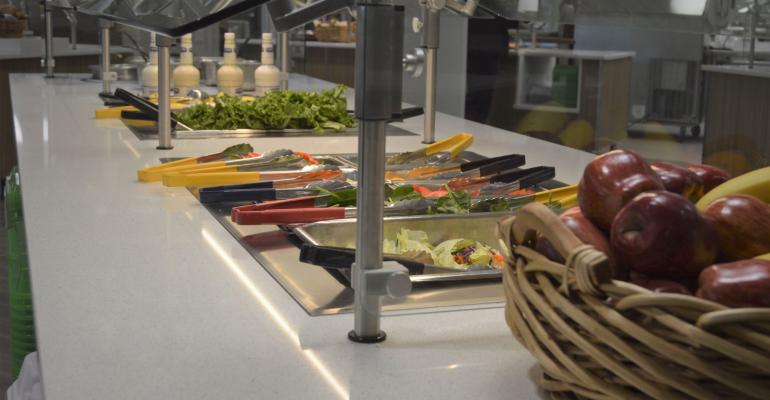 The new dining center in the University of Nebraska-Lincoln’s East Union simultaneously serves as the all-you-care-to-eat dining hall for a nearby 380-bed residence hall and as an a la carte food court for the rest of campus.

In mid-November, the University of Nebraska at Lincoln (UNL) debuted its new East Campus dining center in its East Union building. The venue is rather unique for college dining services in that it simultaneously operates as an all-you-care-to-eat (AYCTE) residential dining hall serving a nearby 380-bed residence hall and as a retail food court with a la carte pricing for students not using residential meal plans. 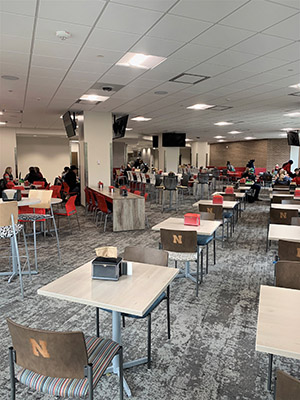 Photo: After passing through checkout, diners can either eat in the adjacent seating area or have their selections packed up for take-away.

A dual-purpose retail/AYCTE campus dining facility is not unprecedented, but such venues usually have separate hours for when they operate in the different formats—usually retail during the day and AYCTE for dinner—but Dave Annis, executive director of campus dining at UNL, says this was the right way to go because of the location.

That previous dining center, located on the building’s second floor but now closed, was fairly limited and offered only AYCTE dining, with non-meal-plan customers paying a set entry price at the door.

The new, larger dining center, located in a first-floor space previously containing storage areas and meeting rooms, now offers a more elegant, if a bit more complicated, alternative. All students are free to enter the servery area, where they are greeted by an array of food stations where they make their choices before heading to the checkout. Selections can be served either on plates for eating in the adjacent seating area or packed for takeaway.

“For the [AYCTE students], they just swipe their card and walk out no matter how much food they have, and they can also come back in because with their all-access plan because they can run their card every five minutes,” Annis explains. For the others, “almost everything is priced a la carte, so a cash customer gets what they want and then pays the cash price for what they take.” 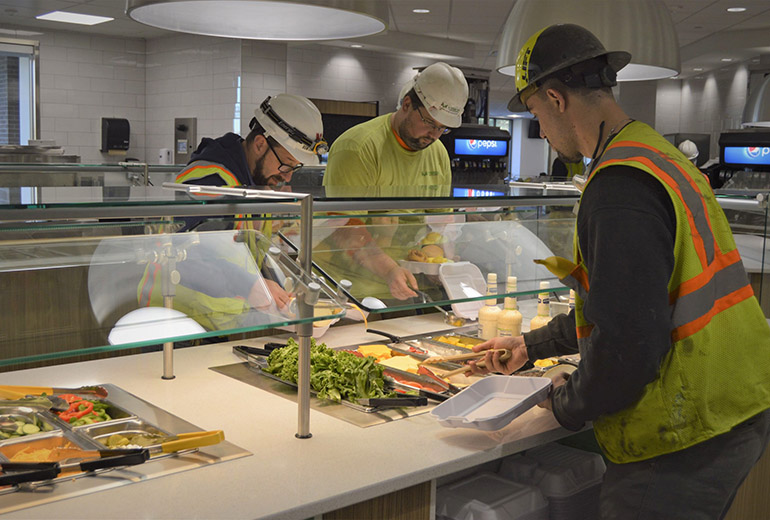 Non-meal-plan customers pay a la carte for their selections in the East Union dining center, including a uniform 49 cents a pound at the self-service bars.

For self-service lines like the salad bar and the hot bar, pricing is determined by weight at a uniform 49 cents an ounce. Annis says that’s more practical that trying to sort out what came from which bar when customers typically mix and match ingredients—taking chicken nuggets from the hot bar to top a salad from the salad bar, for example.

Customers can enter the servery as often as they want because they have to check out after every trip, where meal plan holders are validated, and cash customers pay for each trip’s selections.

The servery has five food stations plus dessert and beverage areas. They include a grill, a deli, a salad bar, an international foods station and a traditional entrée station. Hours are 7 a.m. to 7:30 p.m. every day.

According to Annis, most of the initial confusion about how the venue now operates seemed to come from faculty and staff, who were used to the older dining facility in the building with its set entry price.

“The first couple days we had people coming through after filling up their containers, then get to the register, get it weighed, and have it priced out at like $17,” Annis says. “So we had a grace period because we didn’t want to hit people who were used to paying $10 now having to pay $17.”