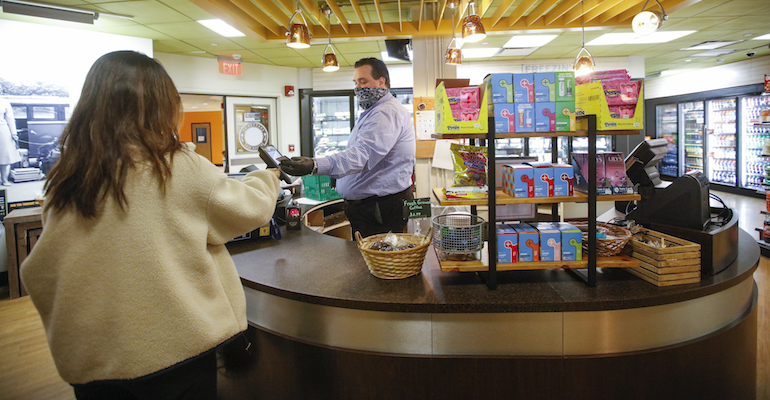 University of Rochester dining services prepares for an unpredictable fall

Preorder and takeout from dining halls, expanded retail, more grab and go and more seating outside dining areas are among the changes planned for campus dining in the University of Rochester’s fall term.

Like other universities across the country, the University of Rochester (UR) in New York is making preparations for what will be an unpredictable fall term as students return in the wake of the coronavirus crisis. The unpredictability starts with the student population, as the university dining program even in late June was unsure how many would show up on campus and how many will live in campus housing, numbers that obviously affect meal counts.

On a campus that ordinarily sees 5,500 to 5,800 meal plan holders, contract numbers were running in the 3,600 range in late June, which is lower than normal, says Cameron Schauf, director of campus dining services & auxiliary operations. He concedes that that’s not especially surprising given the level of concern among students and families over safety issues, and uncertainty among international students about their status for the fall.

The residential population will also be down as triple residences are being eliminated in campus dorm buildings. At best, that will allow 4,306 students to live on campus versus the norm of 4,500-plus, though a number in the 3,600 to 3,800 range is much more likely, Schauf says. 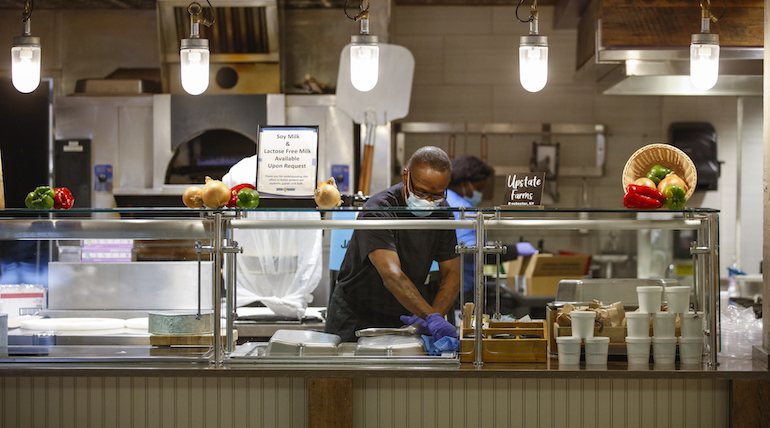 In UR’s two all-you-care-to-eat dining halls, major changes are on tap, starting with new preorder and takeout options, along with limited seating and almost no self-service.

The dining halls will post menus and enable preorder through the Grubhub app, which previously was only available for retail locations, and students will be able to pick up their preorders without going inside the facility. Preordering through Grubhub, already “robust” in past years, is expected to basically double in the new school year, Schauf says, driven by both the new option to use the service at the dining centers and an expected increase in orders from the retail outlets.

The preorder option will allow students to customize their meal choices without holding up serving station lines. Menus will also be more streamlined with fewer choices than in the past, though variety will still be offered through day-to-day menu rotations. To further minimize time spent in the servery area at the all-you-care-to-eat dining centers, “we’re making it possible for a student to build a complete meal at any station that they go to, so that they don’t have to go to multiple stations if they don’t want to,” Schauf explains.

Students can enter the all-you-care-to-eat facilities as many times as they want as meal plans allow unlimited swipes, though for all practical purposes, the regulated entry procedures will make this impractical, especially at peak periods.

While there was no self-serve on campus over the spring, “we’re trying to introduce a little bit of self-service [for the fall] where we can do it with minimum touching,” Schauf says, citing the possible use of beverage dispensers that limit the customer to touching only their individual cup, or utensil dispensers that eject a single item at a time.

To limit the number of patrons inside a major dining venue such as the two all-you-care-to-eat dining centers and the main retail food court, Schauf says he will have managers “serving in a host capacity. They will be instructing students to make sure they line up correctly and keeping socially distant. They will manage the flow from outside into the facility and then get people to the right lines.” All the stations will have queuing spots. 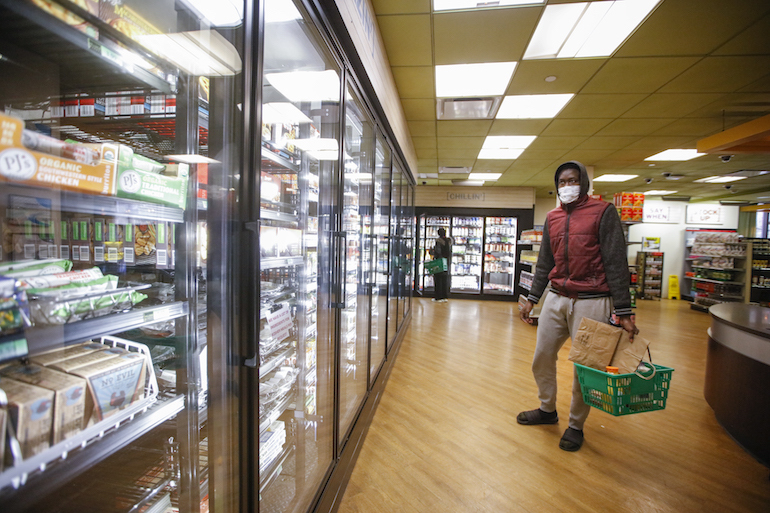 As for dining in, the State of New York currently is allowing 50% of past seating capacity, “but we’ll probably be under that in both of our all-you-care-to-eat facilities once we make room for queuing and everything else,” Schauf observes. “We’re just not going to have enough room [for the same amount of seating as before], so while some people will be able to stay in the facility to eat, everything will be prepared for takeout so that if someone wants to leave, they can. We won’t try to do any half-and-half.”

There’s a possibility, depending on how things go early in the semester, that students will have to make reservations for staying in the dining halls to eat. It’s an option Schauf says he is working with Grubhub on.

“The reservation system would allow people to reserve a time to be there, though it wouldn’t necessarily guarantee them a table,” he says, “but it gives us a way to [control occupancy] if we get the kind of peaks we’ve had in normal school years.”

He adds that he doesn’t see the system necessarily being used by students to make actual reservations—though they would be able to—so much as a way to check on how busy the venue is by the wait time displayed.

“With the reservation feature, a student can quickly check their phone and see that at one of our areas, the wait is 20 minutes while at another one, it’s five minutes, and that will help them make their decisions on where to go,” as well as helping the dining operation to disperse traffic, Schauf explains. The reservation system would only operate at certain times of day when traffic threatens to swamp the facilities.

With seating capacities limited inside the dining venues, additional seating is being considered in outdoor areas, at least for early in the semester when the weather is expected to be mild. Schauf says consideration is also being given to converting indoor spaces such as the Feldman Ballroom into dining seating. The Feldman is located in the Frederick Douglass Commons, which also contains the Douglass Dining all-you-care-to-eat facility and so could replace the seating that dining facility will be losing.

Retail outlets in general were heavily grab and go even before COVID and Schauf expects even more of that in the coming school year as students look to get meals quickly and safely. One retail outlet that will close at least at the beginning of the fall term is OptiKale, a labor-intensive custom bowl concept that may reopen if needed on short notice should the need arise.

Meal plans are being adjusted to allow takeout from the residential dining centers as well as to use meal swipes at certain times of the day in retail locations. In fact, retail will be expected to take some of the pressure off the dining centers with expanded grab-and-go options. One existing outlet—serendipitously called Grab and Go—is a preorder-only outlet that will be open 7 p.m. to midnight to give students another option besides the dining centers (which will be open until 9 p.m. as before) or the other retail locations.

Schauf is also looking at how menus and their staffing requirements impact operations and labor usage in the expected new environment.

“We’re trying not to do intricate hands-on plating that requires a couple team members to stand shoulder-to-shoulder,” he notes. “That hasn’t been so much a matter of changing equipment as just changing the flow behind the counter.”

He anticipates needing more staff at the beginning of the semester just to act as hosts and manage customer flow. 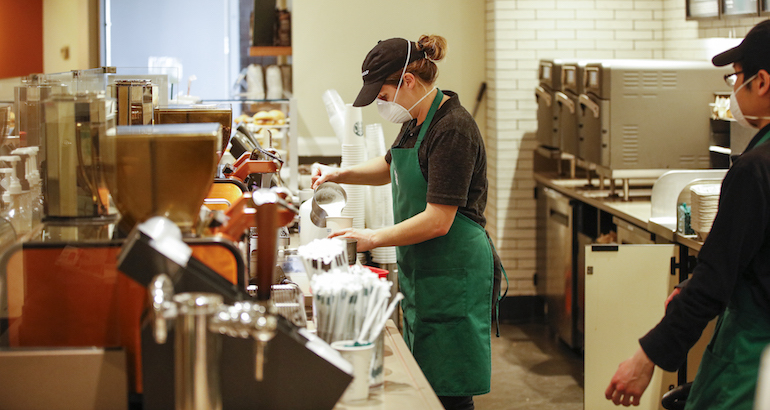 Starbucks assistant manager Conor Tomaszewski makes a drink during the COVID-19 pandemic this past April.

“Otherwise, we’ve been pretty good about keeping it balanced and reassigning responsibilities based on the new normal without having to actually add bodies, so when it comes to serving, cleaning and all those things, it’s just been a reallocation.”

One thing Schauf says he’d like to see is a staggered return to campus by students over an extended period of a couple weeks, which would allow departments like dining to ease into the semester and test procedures and protocols with a limited number of customers to see what works and what doesn’t. It would also mitigate being hit all at once by a full student body, all unfamiliar with the new protocols.

Meanwhile, an effort has to be made to maintain as much of the campus community feeling as possible in the midst of a situation that demands social distancing.

“We know students are not going to just stay in their rooms, so we’re looking for spaces where they can have the interaction they’re looking for and still remain safe,” Schauf observes. His department is working with others to develop activities and programming in dining areas, “so that it’s more of an experience than just a room where they can take their food and eat and then get up and go.”