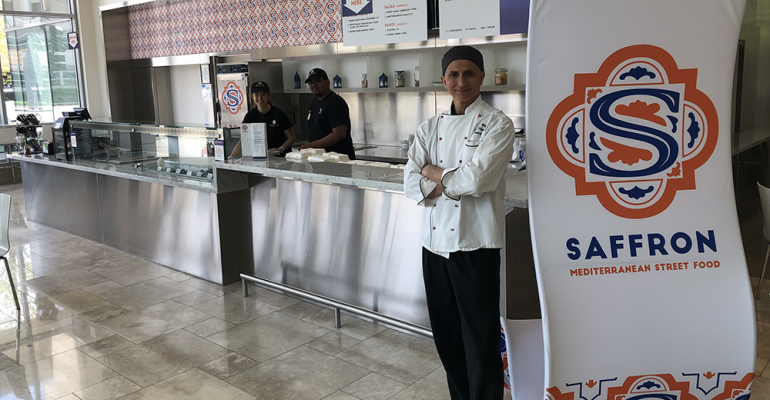 The University of Wisconsin’s challenge: Develop a concept “much more quickly and much less expensively” than usual. The solution is Saffron, a Mediterranean concept that brings in some lesser-known menu items along with the most popular item: chicken shawarma.

“It had to be more than a pop-up.” That was the directive University of Wisconsin-Madison’s (UW) Associate Dining Director Carl Korz was working with when it was time to replace an ice cream concept in the UW’s Discovery Building, a research center that’s open to the public for hands-on learning.

Korz’s mind was made up when Chef Sabi Atteyih’s experience in Mediterranean cuisine made the theme of the concept crystal clear: healthy, plant-forward menu items that meet halal standards and also reflect the diversity of students living on the Madison, Wis., campus.

Mediterranean cuisine, “paired with a format that’s current” is what Korz says “sealed the decision.” The format is fast-casual/customizable, a style of eating favored by many age groups in today’s dining climate. Even with the customization piece, counter service is focused on simplicity. Customers choose a base—leafy greens, couscous or pita—and then spreads, proteins and sauces. The line moves along quickly and “people enjoy the choices,” Korz says.

“There was no other option than to lead with the food,” Korz says, referring to Atteyih’s experience from past lives in the fine dining and the Middle East, “his food is just tremendous.”

In addition to the usual suspects of Mediterranean/Arab fare like hummus, falafel, chicken shawarma and tabbouleh (all made fresh in-house), off-the-beaten path items have found menu success too: a tamarind drink, Egyptian beverages, muammara (a peppery, garlicky walnut-based spread with pomegranate molasses) and dark chocolate-dipped dates. “It’s all delicious and it widens people’s palates,” Korz says. “The tabbouleh is the best I’ve ever had. I ran into one student who eats it five days a week.”

Overall the response to the new concept has been strong and steady, with a very stable check average of about $7, with 125 to 150 guests served per day, pretty impressive given Saffron is only open from 11 a.m. to 2 p.m. In addition, no effort or cost has been expended on marketing, Korz reports. “It’s only word of mouth, which we think is the best.”