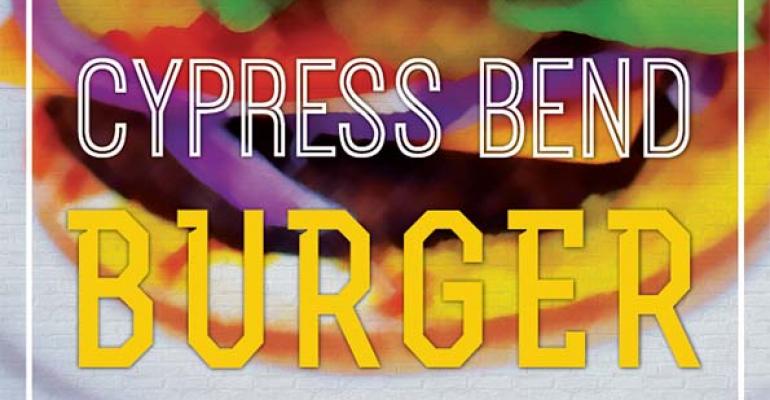 By promoting a new burger offering both online and offline, UT Austin Dining not only increased burger sales by 30 percent but also turned customers into fans. 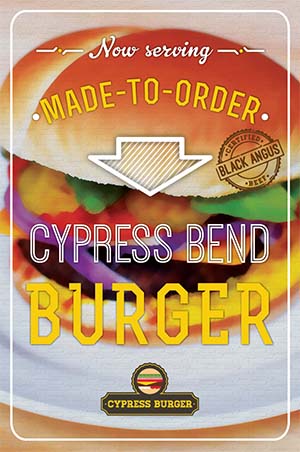 Food-loving Instagram users know that photos of juicy, perfectly grilled, excessively topped burgers are sure to get many “likes.” UT Austin’s Division of Housing and Food Service (DHFS) decided to translate those likes into big burger sales. The media plan, which led to a skyrocketing in sales, included online and offline elements, a contest and even a cool stop-motion video.

The new burger project began last spring at Cypress Bend, an a la carte dining spot on campus that’s located on the ground floor of a dorm and across from the football stadium. Burgers were already being offered at the grill concept, but they were nothing to write (or Instagram) home about…yet.

A tasting panel of chefs and managers tried a few different burgers, finally choosing a Black Angus burger as the winner based on its taste, texture and overall bodacious burger quality. Several different buns were tested as well, with a corn-dusted crostini bun coming out on top.

“Everyone just really enjoyed the Black Angus burger, and they all said the bun enhanced the beefy taste of the burger itself,” says Kathy Phan, foodservice marketing coordinator.

So it was decided the switch would be made to fresh, never-frozen Black Angus burgers with new crostini buns. Three signature Cypress Burgers were created: the BBQ-bacon-cheddar, the mushroom-Swiss, and what proved to be the most popular, the South of the Burger, an Angus beef patty on a jalapeno bun with guacamole and pico de gallo. There’s a topping bar with Sriracha ketchup, curry mayo and a “secret” cypress special sauce (psst: the secret blend is mayo, ketchup, minced onion, sweet relish and chipotle).

The switch wasn’t made without a fair bit of fanfare. A detailed marketing plan swung into action at the beginning of this semester.

That included a social media campaign that invited customers to post a photo of their burger to Instagram or Twitter, tag UT Austin dining and be eligible to win a week’s worth of free burgers (10 total).

A contest is generally a great place to start when the goal is getting millennials to notice a new promotion, Phan says, adding that she got inspiration from the way brand giants like Starbucks roll out new products.

“Students are our main customer base, and they love contests, love free stuff,” Phan says. “For a launch of something like this, it’s important to try and see what other social media accounts are doing in other industries. Starbucks does this very well.

That’s how we got the idea to have them post their pictures of Cypress Burgers to win free burgers.” 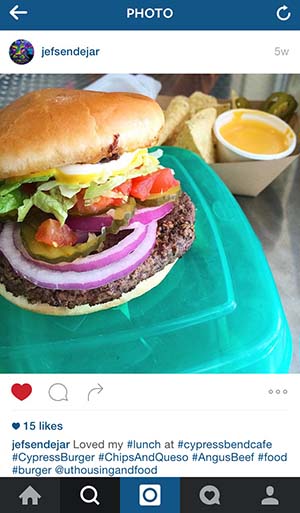 And a good social media contest will turn participants into brand ambassadors.

“If we can get them to help promote us using their social networks…” Phan says of the potential to reach millions of eyes through student social networks.

The use of flyers and table tents helped get the word out to new students, or those who weren’t already following dining services on Twitter or Instagram. Plus, Phan says, “I think it’s really important to make sure your customer-facing staff, like cashiers, help promote the social media aspects as well.”

When serving burgers, Cypress staff would remind students that they could win free burgers by posting an Instagram photo. Since it’s an a la carte dining operation, this makes a difference more so than it would in all-you-care-to-eat location. So far, five students have won 10 burgers each. Is that a lot of burgers to eat in a week? Each winner has chowed down with no sign of getting “burgered-out,” Phan says.

As the semester went on, it was clear that the burger buzz had affected the bottom line.

“There has been a lot of positive feedback, and after about 30 days, we found a 30 percent increase in burger sales since the launch,” Phan says. “And there was another surprise—a 250 percent increase in double-patty burgers ordered. They like the new burger so much, they want two.”