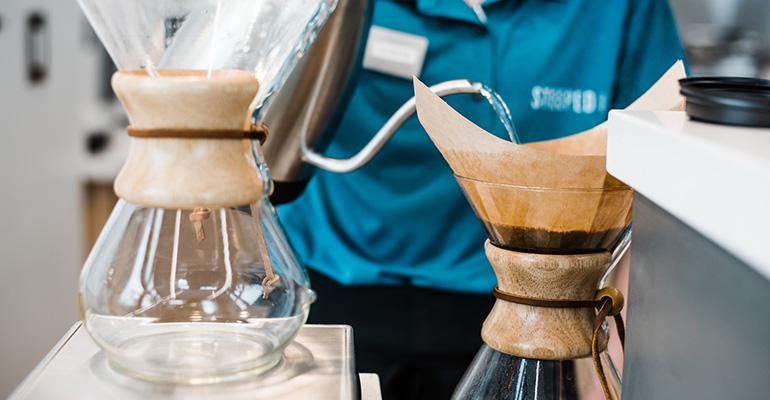 Steeped brews up an alternative campus refreshment option to the traditional coffeehouse.

Tea is hot on the campus of Utah State University (USU), says Jamie Bradford, USU’s associate director of retail operations. “It’s an area for which there is definite demand on our campus, but we traditionally just had bagged teas we’d get from different vendors,” she explains.

Now, at Steeped, a new campus retail café that opened in mid-March, the brews are made to order in front of customers with loose leaf black, green and herbal teas from specialty vendor Smith Teamaker.

There are currently six different choices available each day, with plans to eventually add specials by the seasons—teas suitable for iced tea drinks in the summer, spiced teas redolent of the holidays late in the year and so forth. Steeped may also do more with tea-based specialty drinks going forward. Currently, the brews are only served hot and straight. 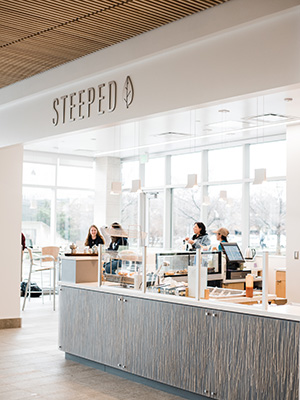 The teahouse, currently only open weekdays from 7 a.m. to 3 p.m., serves as the onsite food outlet for USU’s new Life Sciences building, which opened in January. Located in the high-traffic lobby of the building, the cafe specializes in grilled cheese sandwiches served in various styles, such as Buffalo chicken, mushroom melt and Tuscan melt, all made to order on a panini press.

Currently, the food menu is set but Bradford says starting next fall, plans call for a specialty grilled cheese of the month.

As for the teas, they are served either in to-go and “to-stay” cups, the latter being specially designed, logoed glasses. A signature offering is Tea for Two, a combo that includes not just tea for two individuals but also two macaroons made fresh in USU’s campus bakery.

The somewhat unusual focus on teas was prompted by a partnership between Utah State Dining and Maura Hagan, dean of USU’s College of Science, under whose jurisdiction the new Life Sciences building falls.

“She’s the one who really wanted a teahouse because she really loves tea, and she’s the one who came up with the idea for this,” Bradford notes. “And she’s been really supportive of us as we’ve gone through this process” of developing the concept.

While tea is definitely the station’s specialty, it does also serve coffee in a pour-over format.

“This is the eighth café we have on campus,” Bradford notes, “and with each one we try to do something a little different. Here, we didn’t want the standard urn where you come in and get a quick coffee to go. The pour-over is made to order where we grind the beans as you’re ordering, so it’s super fresh even though it takes a little longer—but then, if you want fast coffee, it’s only about a hundred yards away because we have cafes all over.”

Even though Steeped sounds like it would be a place where students rushing to and from classes grab a quick drink or sandwich, it’s actually designed to be more of a place to linger, Bradford stresses.

“This building is meant to [foster] community in the Life Sciences Department, with study rooms and lobby areas on each of the floors where people can hang out for hours,” she explains. “It is meant for students to come to the building, take classes, study, eat and socialize.”

And what better way to do it than over a cup of tea?

“People love the tea,” Bradford comments. “They’ve been so excited about it.”