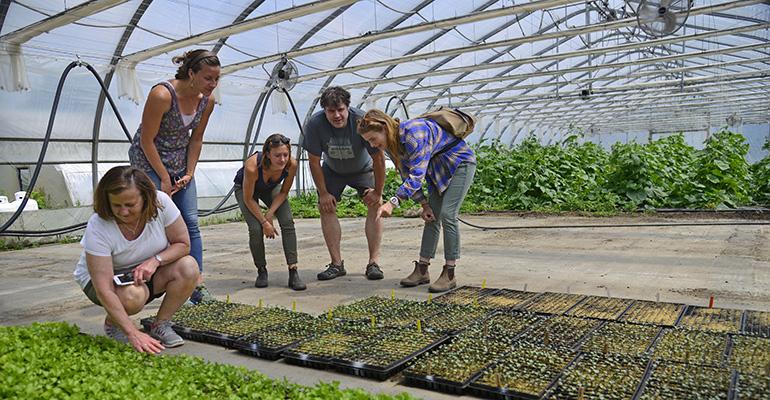 University of Vermont has already met its original 20 percent “real food” commitment, three years early, and is now setting its sights on 25 percent by 2020.

The Real Food Challenge is one of the more prominent initiatives growing out of the sustainability and wellness trend that has impacted a growing number of dining operators in multiple onsite foodservice segments, perhaps none more than higher education. It is in that segment where the Real Food Challenge program operates to create what it terms “a healthy, fair and green food system.”

The stated goal of the initiative is “to shift $1 billion of existing university food budgets away from industrial farms and junk food and towards local/community-based, fair, ecologically sound and humane food sources—what we call “real food”—by 2020.”

To date, Real Food Challenge has signed up 80 schools from around the country, the vast majority of them smaller, private colleges and universities.

Among the exceptions is the University of Vermont (UVM), a public land grant institution with an enrollment of some 13,000. In fact, UVM was the fifth school to sign the Real Food Challenge commitment, back in 2012, pledging itself to a goal of having 20 percent of what it serves on campus meeting the Real Food definition by 2020. That is a goal the school has already met, three years ahead of schedule, by spending 22 percent of its dining dollars on Vermont products in 2016, a total of $1.63 million going to more than 150 local farms and food businesses.

That done, UVM has now committed itself to a 25 percent goal with the same 2020 deadline.

“In our RFP, we were very clear right up front that the Real Food Challenge was part of the deal if you’re going to come to UVM,” says Dennis DePaul, associate dean of student affairs at UVM. “We actually heard from many of the vendors that bid, as well as vendors that chose not to bid, that this was impossible to meet and that nobody was going to be able to do it, but Sodexo proved them wrong.”

The company not only embraced the Real Food Challenge goals but was able to provide considerable impetus thanks to its significant market presence, not least through an initiative called Vermont First that nurtures a dependable local supply network by providing smaller local growers with the resources and training they need to meet the needs of large institutional foodservice programs such as the one at UVM.

“We host a forum two times a year for farmers to educate them on how to buy through Sodexo,” says Melissa Zelazny, Sodexo’s resident district manager at UVM. “We’ve also helped smaller farmers work through our distributors.” UVM faculty such as Amy Trubek, an associate professor in the Department of Nutrition and Food Sciences and faculty director for the Food Systems Graduate Program, are deeply engaged in the university’s food service operation and in the Real Food Challenge. Faculty engagement was a factor in helping the university reach its Real Food Challenge goal three years early.

“We have a person who coordinates with Sodexo accounts around the state and really is kind of our liaison with farmers and distributors and the local food economy in the state,” Zelazny offers. “The coordinator goes to the different schools and helps educate them on the numbers and provides data back to each school on what they’re buying locally.”

Purchasing from local sources is a major component of Real Food Challenge’s criteria in the procurement area and addressing it was a critical component of meeting the program targets.

Because the UVM campus is so retail heavy, there is plenty of opportunity to stock and sell packaged products from local vendors in campus c-stores, while the prepared food concepts in the campus dining mix emphasize local brands among its some dozen or so retail outlets.

“We don’t want national brands or franchises on our campus,” DePaul says. “We wrote into our contract that we want to partner with Vermont restaurants like New World Tortilla and Skinny Pancake and bring them onto our campus versus the Taco Bells, for example.”

On the fresh ingredient side, local sourcing is not always easy in Vermont, so the emphasis so far has been on products readily available in the state, such as apples, maple syrup and dairy, as well as crops that can be grown late into the year.

“Our students really like kale now!” Zelazny laughs. “It’s on the menu a lot and has made a splash. We do a lot of seasonal products like root vegetables.”

Other strategies being deployed to meet the new 25 percent goal for Real Food Challenge include the return of the university’s own dairy herd, which will allow UVM to produce its own ice cream and other dairy products.

There is also an increased emphasis on purchasing more locally raised beef, a product category that because of its relative expense has an outsized impact on meeting Real Food Challenge targets, which are based on the dollar amounts spent on various products.

To extend summer’s bounty from local growers, storage capacity is being expanded, not least by a planned new dining hall complex slated to open this fall.

The new facility will not only offer storage capacity but has been built from the ground up to meet Real Food Challenge goals, including flexible stations that can take advantage of sustainable products to create freshly made, healthy dishes, and a discovery station where cooking classes can be taught.

“I don’t want to teach students how to eat on campus,” DePaul says. “I want to teach them how to eat for life, and part of that goal is doing things like teaching them how to cook, teaching them what real food is, where their food is coming from and having them understand the systems behind their food so they don’t walk into a grocery store and just buy what’s in front of them. [I want them to be able to] carefully craft a meal based on the priorities and values we’ve taught them here.”

One On One With: How dining at the University of Rochester plans to approach the spring term
Jan 22, 2021