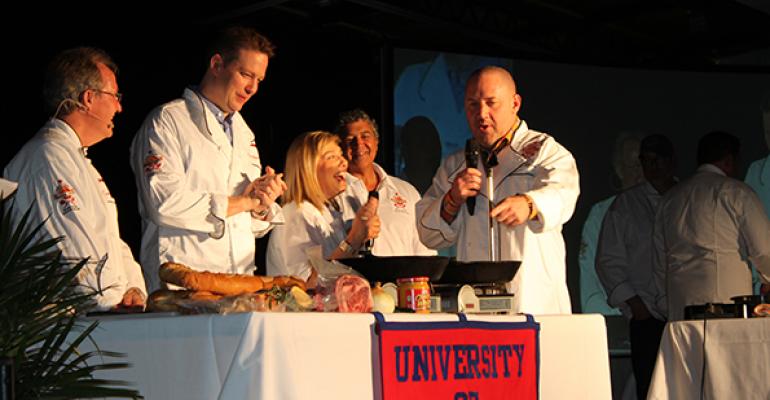 Local chefs assist basketball coaches from Virginia Tech and the University of Richmond in a culinary battle benefit.

The event took place at the Science Museum of Virginia and benefitted Max’s Positive Vibe Café, a place that trains and hires people with disabilities, in many cases, giving them a confidence they never knew was possible.

The coaches received a little coaching of their own by some of the region’s best chefs, including Glen Pruden, executive chef at the University of Richmond.

Pruden, along with Gary Whitecotton, a chef instructor at Northern Neck Technical Center, assisted Coach Mooney in preparing an iconic dish from his hometown: a Philly Cheesesteak.

Local restaurant chefs Joe Sparatta from Heritage and Lee Gregory from The Roosevelt helped Coach Williams prepare a dish from his hometown in Texas: a brisket sandwich.

As the competition got underway, the crowd of about 250 people watched skillets heating up on stage, along with a dash or two of friendly trash talk. Mooney sautéed peppers and onions for his cheesesteak, a jar of Cheez Whiz within reach, while Williams assembled the brisket sandwiches with a tangy slaw.

It turns out Mooney’s favorite cheesesteak in Philly is Geno’s (not Pat’s). When asked about his hometown in Texas, Williams simply said, “You’ve never heard of it, trust me.” Turns out it’s the town of Greenville, just north of Dallas.

The coaches delivered their plates to the judges, who sampled first the brisket and then the cheesesteak. The judges, (including Tara Fitzpatrick, senior editor of Food Management), scored each dish based on a set of criteria: meat, roll/bun, toppings and cohesiveness of the entire plate.

Williams’ brisket sandwich was a real taste of Texas. The meat was perfectly smoky and really tender with some nice bark. The slaw on top of the sandwich had a tangy bite of horseradish and a crunch that worked so well with the perfectly toasted bread and beefy brisket. Also on the plate was a cute little jar of pickles, a cool Southern touch. The potato salad on the side had a lot of dill, a very good thing.

Mooney’s cheesesteak was pure authentic South Philly at its best. Rib-eye is considered to be the perfect cut of meat for this particular sandwich and that’s what they used. No matter what your feelings about processed foods such as Cheez Whiz, it’s hard to deny the magic of biting into a true Philly Cheesesteak “Wiz Whit” (the proper way to order the sandwich). Chef Pruden said that they could’ve used a different cheese (or cheez), something fancier, but they wanted to be really true to the original dish. It was served with crispy, sweet potato chips and a home-brewed beer made by Pruden.

Restaurants engage those with disabilities

Win-win-win actually, because money and awareness was raised for Max’s Positive Vibe Café.

Toward the end of the night, a young man who had recently graduated from the training program and worked an internship with Positive Vibe gave a speech about what it meant to him. He spoke about learning how to make a buffalo burger (one of the café’s signature dishes) and sweet potato fries, both things he’d never even heard of before starting the program. His obvious pride was awesome to see.

“A restaurant is a fantastic environment for people with disabilities,” says Garth Larcen, executive director/GM Positive Vibe Foundation. “Part of it is the socialization. It forces you to come out of your shell. Also, some of the tasks that are really repetitive and tedious to some people, like rolling silverware, are actually calming for some people with disabilities. Plus, it’s instant gratification. Customers tell you right away, ‘Good job.’”

Larcen started Positive Vibe in 2004 when he noticed there weren’t a lot of employment opportunities with disabilities, including his son, Max.

Eleven years later, about 900 people have been through the program, learning basic foodservice skills like bussing tables, working commercial dishwashers, some knife skills and food safety. Larcen said that another thing that makes the work so fulfilling for people with disabilities is the social, real-world atmosphere of day-to-day life in a restaurant.

“They experience the good and the bad of a live restaurant scene, and it gives them a true life experience,” he continued. “They are there when something goes wrong; they see discipline given to a server for being late. They engage with customers. They bond together. Some may come in with no friends and they leave with their best friend.”

Larcen says he couldn’t be more pleased with how the Coaches’ Cook Off turned out this year, and is already thinking about next year. He also hinted at a “Final Four” structure that would involve a couple more area schools.