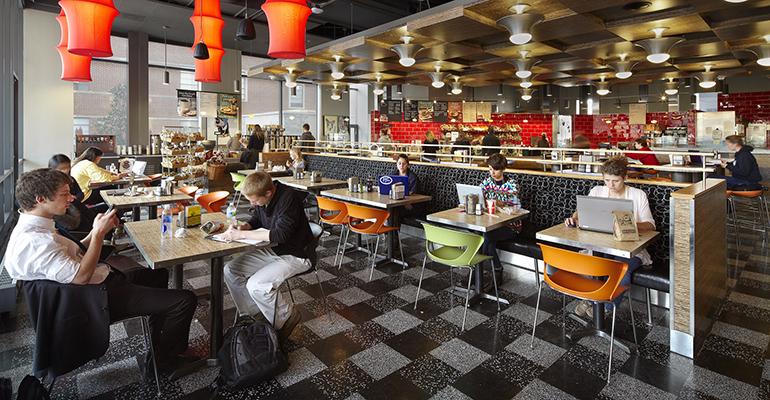 Some new outlets and renovated existing ones, plus sustainability measures like an expanding campus farm highlight recent moves by VA Tech Dining.

The dining program at Virginia Tech uses a flex-based approach that gives users deep discounts (67 percent at the AYCTE dining center and 50 percent elsewhere) on purchases at any campus dining location. This has resulted in one of the college segment’s most successful programs, with that success extending to both in-house brands and national brands, several of which—Chick-fil-A, Au Bon Pain, Qdoba Mexican Grill, Freshems, Bruegger’s Bagels—have their highest sales volumes in the college market at Virginia Tech.

Not content to rest on these results, VA Tech Dining is continuing to upgrade and revise its program. Last fall saw the complete demolitions and renovations of the JP’s Chop House and Fighting Gobbler’s Sports Bar stations in West End Market at Cochrane Hall. Other recent additions include a new grab-and-go outlet at West End Market, a dedicated gluten-free station in the D2 AYCTE facility and the debut of two state-of-the-art food trucks, Periodic Table and The Grillfield. Also, the campus Chick-fil-A and Qdoba units rolled out breakfast menus in Fall 2016 and Fall 2017, respectively.

Fall 2017 also saw the additions of an app that allows mobile ordering and payment throughout the entire program—an option expected to generate more than 500,000 transactions in its first year—and of FreedomPay, which allows credit card processing in less than five seconds.

Initiatives slated for the start of the 2018-2019 school year this fall include a new salad station and noodle concept in the Owens Food Court and a new Deli and Wrap World concept in West End Market.

The D2 gluten-free station is one of a number of initiatives designed to guard health and promote wellness. An active Ingredient and nutritionals website with allergen filter for any sort of food item was rolled out last fall along with an extension of vegetarian and vegan offerings. This year saw the complete removal of Styrofoam in all dining facilities, including national brand outlets as Dining Services worked with chains like Chick-Fil-A and Dunkin Donuts to find alternatives to their regular Styrofoam-based products.

That initiative was complemented by the deployment of reusable-to-go food containers throughout the entire program: Over 10,000 of the new custom branded reusable to-go containers were purchased last fall. Also, a fourth campus OZZI collection machine was added in the Hokie Grill (fall 2017) and Deet’s has transitioned from Styrofoam to 100-percent compostable double-walled hot cups and lids. Going forward, Dining Services plans to begin selling custom-branded reusable sporks to help reduce single-use cutlery waste.

Composting in the dining centers has been going on since 2009, but as of the current academic year, the dining program has begun to surpass the 600 tons a year compost mark, and last year it secured a new three-year contract with composting services provider Royal Oak Farm.

An important component of the sustainability program at Virginia Tech is the Dining Services farm, which will be adding a mobile high tunnel (a type of hoop house) this spring. On-campus production used in the dining program includes beef, pork, lamb, milk, fruit, produce and, most recently, eggs.

This year will see the transition of summer farm employees from dining staff to paid student staff, a change that will support enhanced experiential student learning at Virginia Tech.

Campus production is also aided by the recent addition of two hydroponic grow towers to the Owens Food Court, where fresh herbs are grown, harvested and served in-house. Dining Services is also working with the university’s animal and poultry sciences department to use campus raised cage-free eggs in several dining centers.