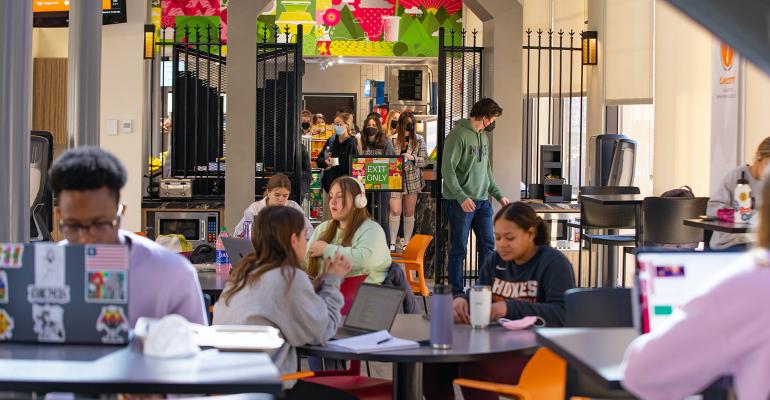 Virginia Tech's new VIVA Market offers grab-and-go items for students seeking something fast before or after class. But it's anything but your average convenience store.

Opened in January, VIVA Market was designed with the future of foodservice in mind. Many of its most popular offerings are automated, helping to alleviate staffing challenges that began before 2020 - and worsened significantly since COVID. "COVID really stepped on the gas in terms of getting us where we were going anyway. Staffing is exceedingly challenging right now and I think automations will be one of the solutions," says Associate Director of Dining Services Brandon Hendricks.

One of the standout automations is the f'real blending bar, which allows customers to make their own smoothies, protein shakes, or milk shakes blended to their desired thickness. F'real typically features between eight and 12 flavors, though the offerings are subject to supply chain fluctuations. Customers select their flavor variety and drink thickness, place a disposable smoothie cup in a capsule, then the drink is blended and poured into the cup. "It takes maybe 30 to 40 seconds for the whole process to go through," says Hendricks.

Though he expected higher demand for smoothies and milkshakes in the morning, milkshakes have turned out to be the biggest hit all day long. (The market is open from 7:00 AM to 9:30 PM most days of the week.) In fact, the machine is so popular that Hendricks wishes VIVA had room for a second one. "I see students taking selfies with it," Hendricks says. "I wish we had two because it gets emptied quickly. If it was a bigger marketplace, we'd have two machines." (And in fact, two f'real machines are going into another campus marketplace that's currently being redone.)

Also popular: The Franke espresso machine, serving up hot or iced espresso drinks at the touch of a button. "It's a touch-screen students can cruise through and customize drinks how they want. It's been very busy," Hendricks says. The premium espresso beans come direct from local roaster Roadmap Coffee, and drinks are crafted in the same amount of time it would take for a barista to make them.  "We've had a few learning curves on our end, figuring out how the back end system works with replacing syrups and cleaning, but no major issues," says Hendricks.

More automated features are coming soon. A Sally the Robot salad dispenser should be making her debut later this spring. "It will contain go-to ingredients for salad bars, we're not going to be shaking things up with culinary innovation," Hendricks says. Instead, the focus will be on stocking Sally with halal-only ingredients. "That will fill that need on that side of campus, so it's a win for students seeking halal foodservice," says Hendricks. There's also talk of bringing in a self-service nacho dispenser, where students can dress pre-packaged tortilla chips with their choice of toppings (like cheese or chili).

Customers can find much more than drinks and salads at VIVA, though. Customers have their pick of more than 400 different items, including prepackaged sandwiches and grilled cheeses prepared at VT's commissary kitchen, plant-based wraps, self-serve soups, yogurt parfaits, fruit and veggie cups, bottled drinks, and packaged snacks. Flatbread pizzas are also in the works. And in the warmer months, there are plans to offer organic produce from VT's dining-supported, partly student-run Homefield Farm. Students can use their dining plan to make purchases.

Housed in a former Subway and Burger King space, VIVA Market occupies less than 1,000 square feet in VT's Johnston Student Center. "Knowing it was on the academic side of campus, we knew it was going to be busy in waves. We wanted the flow to make sense so students could get what they needed and head out," Hendricks says. The market's loop-shaped layout is designed to maximize efficiency rather than emphasize upselling. And it's working. "Customer flow was a huge point of emphasis for us. It's one of the things that I'm most pleased with. The way students traversed this space is the way we designed it," says Hendricks.

Two months into operations, the market is proving to be a big success. "It's been the best open-up I've been a part of here," Hendricks says. "It's been exceedingly well received from student dining plan holders and the community. I haven't had one negative comment."