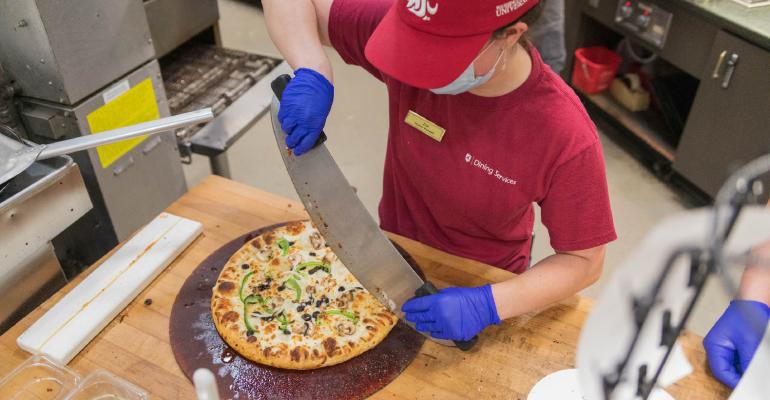 Late-night snacks plus speedy, friendly service are a hit.

When Washington State University students came back to campus this fall after an extended pandemic hiatus, they were met with a new option for late-night dining. And the food could be delivered straight to their door.

Coug Eats is a revamped version of Flix Express, the old food delivery service that had been available before Covid-19. The new program was conceived as a branding change, but the realities of running a university meal program during a nationwide staffing shortage has forced Coug Eats to keep it simple - at least for now. "The menu is primarily pizza, pasta, and wings. Those are the things that are student favorites in the later part of the day, and our core menu has been the focus until this point. We aren't able to do everything we could do pre-Covid," says Sarah Larson, WSU Director of Dining Services.

Designed to provide prepared food options after dining hall dinner services end, students can place mobile orders for Coug Eats between 7:30 PM and 9:30 PM using the GETFood app. Orders are typically delivered to on-campus residents halls about an hour after being placed. "It's popular, especially given that our dinner options end at 7:30, so this is a nice way to augment some options in the evening," Larson says. "They throw in their orders, and there's a lead time that we can assign and manipulate." 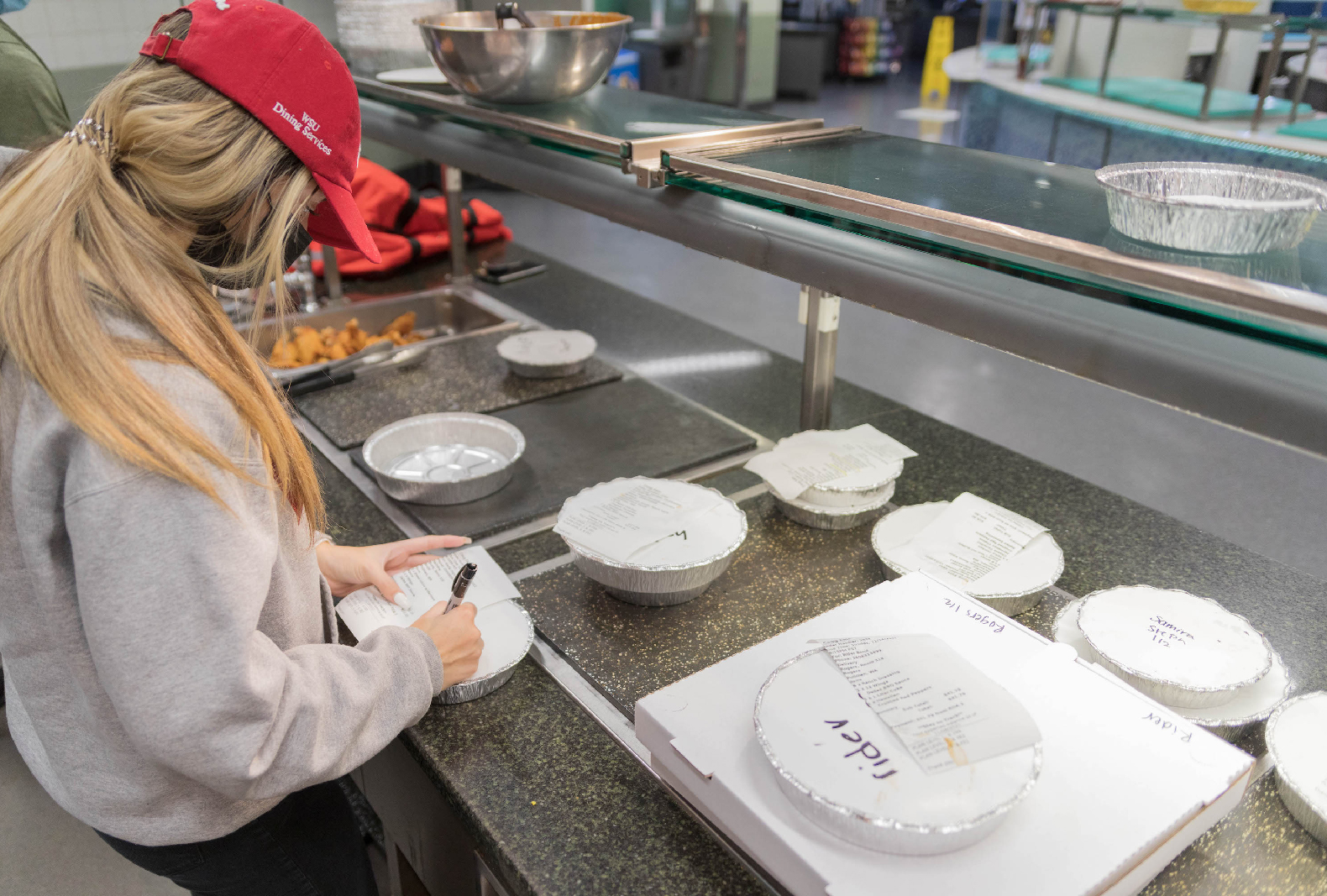 Pasta and wing orders are prepped for delivery

Coug Eats is primarily run by student employees, who are supervised by two professional staff members. "This is an evening program, so we're able to hire students more effectively. We have a robust student employee program at WSU," says Larson.

Orders are prepped in the kitchen space of the largest dining center on campus. "We do some after-hours service there but we reduce the size and number of the platforms. We use part of that kitchen as our ghost kitchen," Larson says. Once the food is packed and prepped, it's delivered by students to residence halls. Delivery staff will walk or drive, depending on which hall the order is being sent.

Coug Eats currently runs five nights a week, from Sunday to Thursday. While Larson plans to eventually move to service to seven nights a week, she's making an effort to manage expectations. "We were 100% remote last year. It's just taking us time to ramp back up with staffing," she says. "We've been careful about opening all of our facilities with a schedule we feel we can maintain rather than opening more and having to back off." 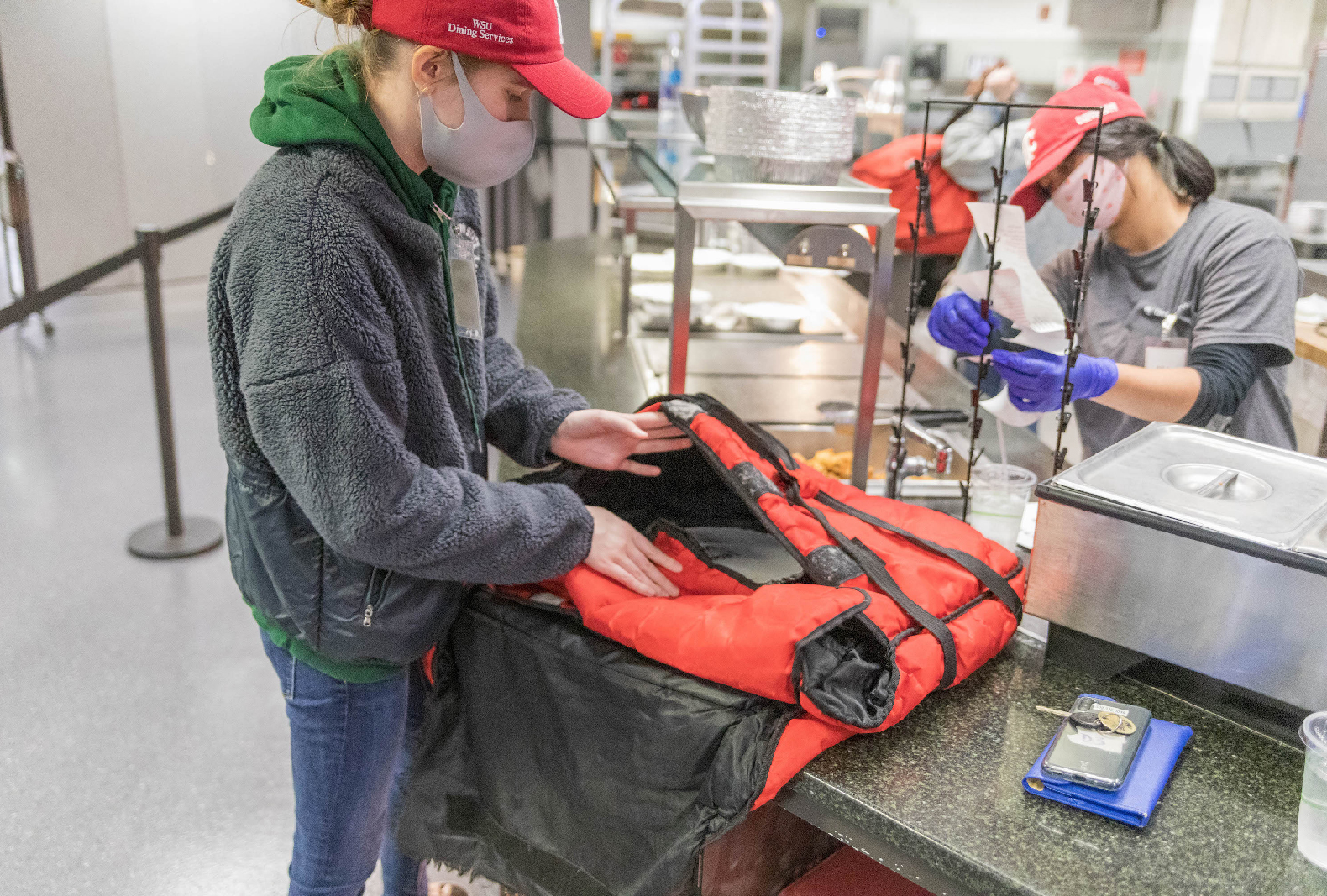 A student delivery worker gets ready to bring food orders to the residence halls.

It's a similar situation with the menu. Though Coug Eats is currently sticking with a streamlined selection of tried-and-true favorites, Larson hopes to soon be able to expand the program's offerings. "Weekly specials will run at times, we'll rotate things up. We're beginning to experiment with that again," she says.

Coug Eats has grown in popularity since launching at the start of the fall semester. The program currently does 150 to 200 transactions per night. "We always open a little later after the students arrive," Larson explains. "We start classes typically in mid-August, so we'll start our program after Labor Day. We'll do a marketing blast, and once they understand the program and know it's available , we just get busier and busier as the semester progresses."

This year, surveys conducted by Dining Services show that Coug Eats is one of the programs that students like the most, Larson notes. In addition to giving students a convenient way to access their favorite foods after hours, they're able to pay for orders with their dining dollars. "It's popular. The students, they love it," she says.

The fact that student delivery employees are both friendly and punctual seems to help, Coug Eats Associate Manager Allyssa Sheppard told WSU Insider. Sheppard told the university newspaper that, "My staff is having fun preparing and delivering food for their fellow Cougs. Our customers often say they are excited to order from us again."