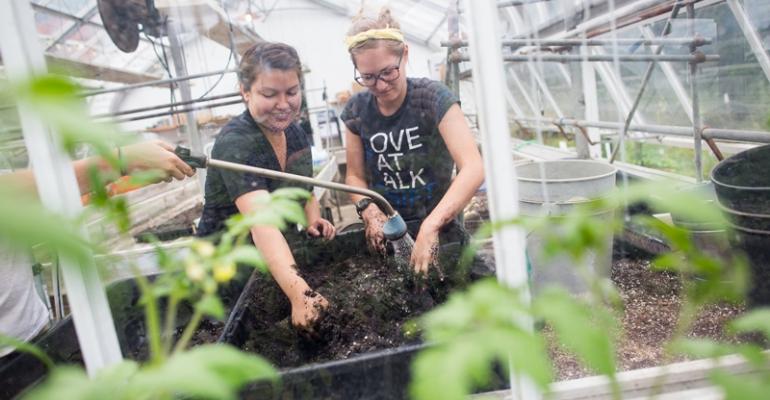 The school’s Eden Hall campus has its own growing fields and is totally reliant on solar power for its food production equipment.

Sprouting up in the rolling rural topography of Richland Township north of Pittsburgh, Chatham University’s 388-acre Eden Hall campus is one of the most sustainability-conscious academic locations in the world. (For a picture tour of the campus, go here.)

Highlighted by the recently opened $50 million Eden Hall Commons Center, the campus is home to Chatham’s Falk School of Sustainability, where practices ranging from water and energy conservation to green facility design and local food production are not only practiced but the basis of the curriculum.

Among Eden Hall’s distinctive features are its 100 percent reliance on solar energy for its power needs, its sophisticated geo-thermal “loop” system that stores summer heat in subterranean rock for use in winter and, perhaps most dramatically, an exotic earthen amphitheater with living, plant-based walls.

Also prominent in this ultra-green effort is the campus dining program, which is managed by Parkhurst Dining and features a menu based on the availability of ingredients produced on the Eden Hall Farm by the students participating in the Chatham food studies program.

“Our goal is to support the sustainability and environmental education of this program,” says Parkhurst Chef-Manager Chris Galarza. “This is a philosophy we also embrace at Parkhurst Dining through our company’s FarmSource program, which is an initiative to find and partner with some of the finest local growers, family-owned farms and producers of food in our communities. In this case, the farm is on site.”

This past spring, crops like fresh beets, beet greens, kale, spinach, mizuna (an Asian water green used in stir-fries and soups,) turnips, Swiss chard and a variety of herbs such as cilantro, parsley, sage, rosemary, mint and three kinds of basil were delivered weekly to the campus kitchen to be turned into the daily menu. There’s also fresh honey from the farm’s apiary.

“So in any given week, I will take in approximately five pounds of each food item,” explains Galarza, who uses the produce grown on campus first and then supplements it with product from local producers identified by FarmSource.Scheduled for the summer harvest are crops like ginger, tomatoes, eggplant, sweet peppers, hot peppers, asparagus, garlic, onions, potatoes, squash (including butternut, yellow and Amish long neck) blueberries and even corn for popping fresh popcorn.
Items such as potatoes, onions, carrots and turnips will be stored in the onsite root cellar to extend the farm’s bounty into the cold months later in the year. That will supplement vegetables produced over the winter from the school’s solar-powered hoop house.

The summer bounty will also benefit area children coming to the campus for summer camps.

“We plan to use the summer harvest in the menus developed for these summer camps, which will help to introduce freshly grown foods to children in hopes to educate them (as well as their parents) on how you can eat healthy without sacrificing flavor,” Galarza says. His summer menu will include roasted root vegetables, eggplant fritters, sautéed summer squash and cilantro lime shrimp.

A teaching kitchen built into Eden Hall’s dining room will allow Galarza to conduct cooking classes for Eden Hall students this fall, showing them how to create tasty meals in their dorm rooms with only one or two pieces of equipment.

Also on tap is an aquaponic system that will allow the school to raise its own trout in 600-gallon tanks with waste from the trout used to fertilize crops.

“Who knows,” Galarza offer, “we may become one of the first campuses that is supported entirely by an onsite farm—you can’t get more local than that.”

UNC-Wilmington in the tank for sustainability
May 05, 2015