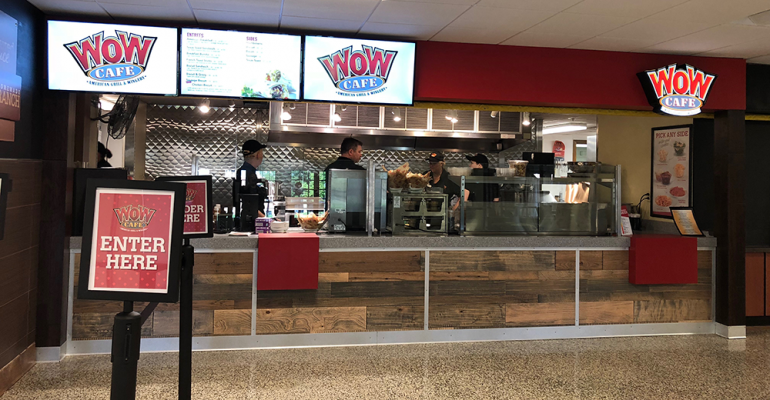 With the tagline an “American Grill & Wingery,” you’d definitely expect a focus on chicken wings at West Liberty’s WOW Café, a Sodexo branded concept that’s taking the place of an older grill station in the student union. But since opening in late August, the wraps have been the main “wow-worthy” item with customers at this Sodexo concept. 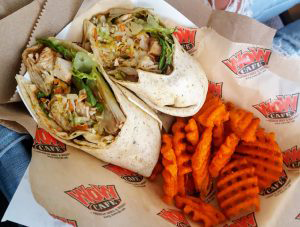 Along with wings and boneless wings with hot sauces, the WOW menu also includes four different types of chicken sandwich (in grilled or crispy), plus burgers with regional profiles similar to the wraps (barbecue, Philly and California veggie).

In order to make all the menu items featuring crispy chicken, WOW required a new fryer along with some other upgraded pieces of equipment, such as a new grill top, three new warming units and a new under-counter cold storage unit. But the project was smooth, Orr says, with planning starting this past January and construction beginning in May.

As the new school year continues, WOW is already outperforming the old grill station. Year-over-year comparisons to the old grill concept show that the concept has served over 11,400 more customers through the first six weeks of business, according to Orr.

A key part of the menu has been the combo meals, any sandwich and beverage with a variety of down-home side dishes to choose from, according to Becky Bowman, retail manager of food services. The selection of sides is something that makes this concept special.

“Students tend to buy the combo meals anyway, but the sides make them even happier,” Bowman says.

The top side dish has been mac ‘n cheese, and other choices include almond green beans, housemade slaw, and red beans and rice. Regular and sweet potato fries are also available.