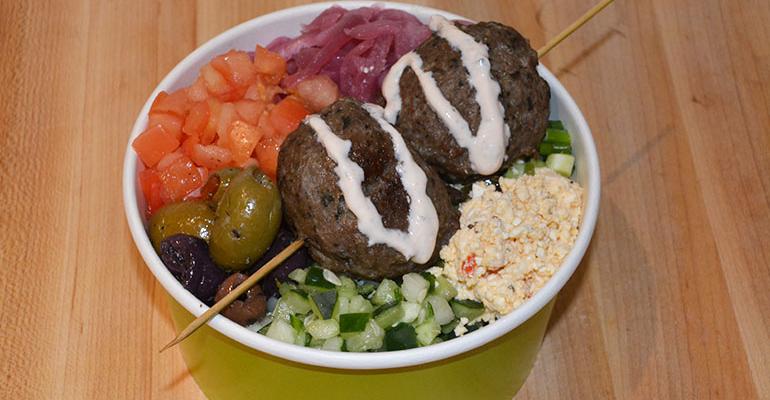 <p>Customers can build their own bowls by selecting a base (grains, greens or a pita), add a &ldquo;flavor explosion&rdquo; (preserved lemon hummus, burnt eggplant, hadari or spicy feta), a skewer (falafel, chicken or meatballs), toppings (including pickled red onion, roasted cauliflower and marinated olives) and a sauce (including harissa vinaigrette and tahini).</p>
News & Trends>Colleges & Universities

The new eatery features fresh and healthful bowls on a foundation of greens, grains or pita.

Med school students spend more than 60 hours a week studying. So when they get hungry or need caffeine, they rely on quick, convenient options.

So, in June, the school gutted the full-service cafeteria located within the Edward S. Harkness Hall at the Yale School of Medicine (which was supported by a mandatory meal plan for medical school students), and replaced it with a more modern and useful concept dubbed Café Med.

The new name serves a dual purpose. It represents both its location at the medical school and the Mediterranean focus of its new menu, which is centered on fresh and healthy bowls. Signature dishes include: Spicy Greek Salad, Green Chickpea Falafel, Fattoush, Turkish Spoon Salad and Spanish Mezze.

Customers pick a base for their dish that can either be grains, greens or a pita. Then they add a “flavor explosion,” which includes choices like spicy feta, charred eggplant, hummus or haydari. Customers finish off their meals with a skewer of spicy meatballs, Moroccan chicken or falafel. Extra toppings and sauces are also available.

“In our focus groups, students emphasized that they want customizable and portable meals. They also want better value, healthful options and bold flavors,” says Adam Millman, director of auxiliary operations at Yale, who has been with the school for just shy of two years. “Café Med responds to all of those demands.”

Millman and his team worked with focus group and the medical school administration to design the concept. They did away with the mandatory meal plan, tightened up the space and created a menu that was not only unique to Yale, but also not offered outside on any of the 50 or so competing food carts on Cedar Street where the med school is located.

“Thanks to our culinary support center, we’re able to execute much of the cooking and prep there then transport the components to Café Med where they are assembled a la minute,” Millman says. “This allowed us to open the space significantly and focus on a design that is more attractive and inviting.”

The $2.1 million dollar renovation updated the infrastructure to meet code and streamlined the back of house. The cafeteria kitchen was turned into a catering pantry. Walls were knocked down to allow for a more open flow and huge glass barn doors were added on the sidewall. A small walk-in was added to the front of house and features glass doors so that its contents act as edible art.

“We added a lot of wood and marble, too,” Millman says. “We wanted the design to match the style of the food and to allow for the food to be the focus. For example, we choose dark countertops so that he food would pop when presented.”

The layout of the cafe has been remodeled to include more windows and promote a more open atmosphere, as students have the option of sitting at high counters or in soft or hard chairs.

By all measures, it appears that Café Med is a success with students. Since opening at the end of September, traffic has increased week over week, Millman reports.

“We wanted to create a facility that was a destination for students,” he adds. “A place where freshness is the focus, where meals are assembled a la minute, and the wishes of our students are not only met but exceeded.”