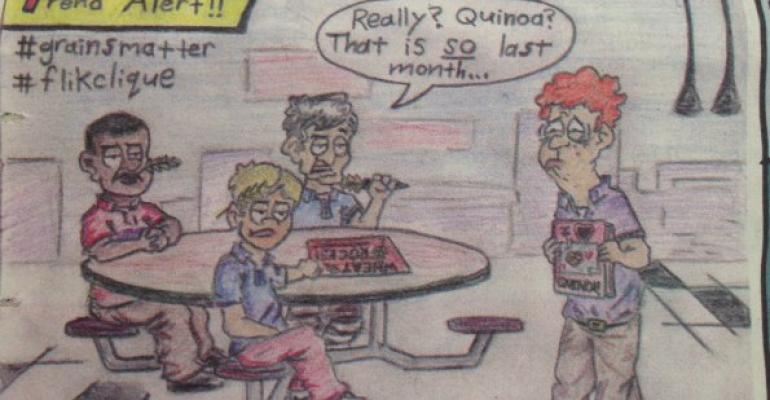 Winning comic strip pokes fun at quinoa &#39;Happy to be part of their everyday life...&#39;

Jordan Richart, a senior at Rockhurst High School in Kansas City, MO, has a knack for drawing, and sense of humor when it comes to trendy grains.

The school recently held a contest for the best comic strip, and it turns out Richart isn’t the only one having fun at lunch.

“Three out of the five top entries had something to do with foodservice,” says Joann Khoder, VP of support services, Flik Independent School Dining, the foodservice provider for the school.

And before you get defensive, the comic strips were not negative 'mystery meat' cafeteria humor. The winning entry actually pokes fun at just how on-trend the lunch program really is. It depicts students in the cafeteria, pointing out that quinoa is ‘so last month.’

And quinoa really was featured for one month, and so was barley. The focus is part of Flik’s program, “a 360 degree approach,” Khoder calls it, to highlight different healthful foods each month during a school year. It has been happening for a couple years now at 155 Flik school accounts.

There has been a ‘Fruits Matter’ school year and a ‘Veggies Matter’ year as well. The program includes digital signage, posters and recipe cards, meant to help students make the connection with healthy choices.

The comic contest was unrelated to school dining, but to see that it’s at the forefront of students’ minds was a good thing for Flik, according to Khoder. Flik’s social media team, which is very active, jumped on the news right away and shared the funny comic with the world.