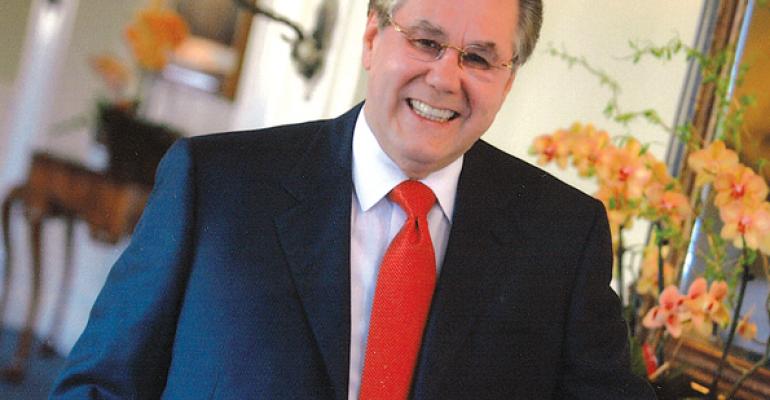 Mike Bailey used to be the chief exectuive officer at Compass Group before he created Trusthouse Services Group.

In mid-March the Trust–house Services Group (TSG), a $451 million contract services company based in Charlotte, announced it is being acquired by European catering giant Elior SA, based in Paris. The move gives Elior, with about $6 billion in worldwide revenues, an expanded presence in the U.S.

TSG itself was created a mere five years ago by former Compass Group CEO Mike Bailey with the acquisition of three companies—Fitz Vogt & Associates, Aladdin Food Management and Ameriserve, an Aladdin subsidiary. TSG’s revenues have since more than quadrupled from organic growth and additional acquisitions.

To find out more, FM editors John Lawn and Mike Buzalka interviewed Bailey about the reasons behind the merger.

Trusthouse currently is owned by its management team and private equity firm Gryphon Investors. How will that change?

Our management team remains with the business as shareholders and we will ring-fence the business inside of Elior.  They want us to continue to grow both organically and acquisitively. At the closing, which will take place in a few weeks, our relationship with Gryphon will end.

How is Elior’s ownership structured?

Elior is majority owned by a London private equity house called Charterhouse Capital Partners. Elior’s chairman and original founder, Robert Zolade, also holds a significant stake in the company himself, at about 26 percent. The rest is owned by some minority investors.

Most people in the U.S. are not familiar with Elior. What is its interest in the foodservice market? And how is it positioned relative to companies like Compass and Sodexo?

Elior is one of the world’s largest contract caterers. It is number 1 in France and Spain, for example, and competes directly with those other companies. It also has a significant presence in Italy, the U.K. and South America. It operates under a number of brand names, as we do, including Eliance, Avenance, Areas and others.

Worldwide, about two thirds of Elior’s business is in contract foodservices and about one third in concessions, including airports, motor stations and railways. Actually, it currently does about $200 million in the concessions business in the U.S., beginning with a contract with the Miami airport several years ago, and now including about 15 U.S. airports. Concessions are run separately from the contract foodservice business.

Is Elior’s contract foodservice business focused as much on the institutional side as TSG’s is?

Elior is very strong in educaton and healthcare, and has a fair amount of B&I in Europe, particularly in Spain, Italy and France.

In the U.S., our focus is very much on healthcare, education and corrections. This has served us very well in recent years and we like the recession-resilient nature of those businesses.

So what are its objectives?

Elior is looking at this market as another growth opportunity. Growth is a little tougher in Europe right now, particularly in business and industry, and the company is looking for other ways to grow.

It has a philosophy—which I applaud—that it will not go to a new country without a local management team that truly wants to be part of the situation. And that is certainly the case with myself and the senior managers of Trusthouse.

Basically, we look at Elior as a good sponsor, a good avenue to allow us to continue to grow. And they look at us as a good management team that they want as a part of Elior, that has the weight and ability and experience to grow Elior’s business.

Once you get a business of Elior’s magnitude, as I know from previous experience, it can be tough to find avenues to help you do that. And quite frankly, at this point in time, I don’t think there is a better spot in the world than the U.S. Sure, you can look at China and India, and ultimately they will be excellent markets. But that is a ways off.

The U.S. is still the biggest market in the world by a considerable margin. We are now the number six player in our industry, and more importantly, number four in our core sectors. We still see lots of opportunity here.

Does that mean you are stlll looking for acquisition opportunities in the U.S.?

Absolutely. If the right opportunities come along, we are in a position to take advantage of them.

Really? (he laughs). You are probably right.

Elior SA is a mystery to most Americans even though it already operates in the U.S. One of the largest contract foodservice firms in the world, it has annual revenues of around $6 billion, which puts it in fifth place in the global rankings behind Compass Group, Sodexo, Aramark and another European firm, Autogrill, which concentrates mainly on airport, rail station and roadway concessions (it owns airport concessionnaire HMSHost in the U.S.).

Elior, which like Sodexo is based in France, was formed in 1991 through the spinoff of the foodservice/catering operations of Accor, a European hotel/resort management firm (it entered the U.S. market in the 1990s with the acquisitions of the Motel 6 and Regal Inn chains). The ownership group included two of Accor’s veteran catering executives, Francis Markus and Robert Zolade, who were determined to grow the company into one of Europe’s leading contract catering firms. They succeeded in doing this through a series of acquisitions that made it a major player in key national markets like France, Spain, Britain and the Netherlands. Elior (the name dates to a corporate restructuring in 1998—before that it was known as Bercy Management) went public in 2000 in order to gain access to capital needed to fuel further expansion (including into the U.S.).

Elior was taken private again in 2006 when it was purchased by a group led by Zolade and investment firm Charterhouse Capital Partners.