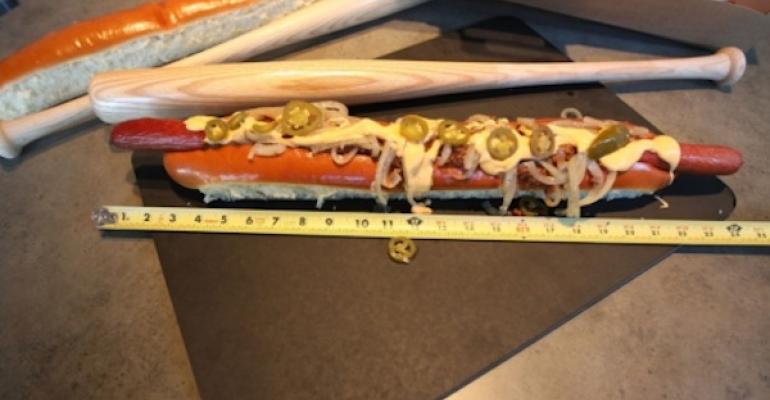 Delaware North Cos. Sportservice will bring the one-pound, two-foot-long "Giant Slugger" hot dog to several  Major League Baseball locations where it handles food and beverage services this July to celebrate National Hot Dog Month. In addition, several of the ballparks will offer guests a chance to break the current record time for consuming the 1-pound hot dog. Topped with nacho cheese, chili, grilled onions and jalapenos, the Giant Slugger is served in a 22-inch potato bun and designed to feed as many as a family of four.

It was originally created by Sportservice chef Cristobal Vasquez for Rangers Ballpark in Arlington, TX, where it's known as "The Boomstick" and has garnered international media attention since its April debut."

We are always trying new concepts," says Casey Rapp, food and beverage director for Delaware North Sportservice at Rangers Ballpark in Arlington. "We found that the hot dog offered our fans a great tasting product and that 'wow' factor we were hoping to create."

The Boomstick will remain a staple in Texas throughout the season, but in July Rangers fans will also get to try "the Great Bratbino," a Boomstick spinoff that is a two-foot-long, one-pound bratwurst that comes standard with sauerkraut and can be topped with chili, nacho cheese, grilled onions, and jalapenos. In addition, hot dog eating contests will be held at several of the ballparks, with contestants invited to attempt to break the current record of 19 minutes for consuming the Giant Slugger—a mark that was set by a groundskeeper at Rangers Ballpark in Arlington.

"Delaware North has a 95-year history of providing the hot dog, an American ballpark staple," says Rick Abramson, president of Sportservice. "Today, we offer hundreds of unique toppings for the hot dogs at our ballparks, and we're proud to offer this new fan favorite to all of our guests."

July has been designated National Hot Dog and Sausage month by the National Hot Dog & Sausage Council. The council's 2012 report on Major League ballparks estimated that Americans will consume 20.5 million hot dogs at games this season. That's enough to round the bases 28,489 times. In addition, the council projects ballparks will sell 5.2 million sausages this year.