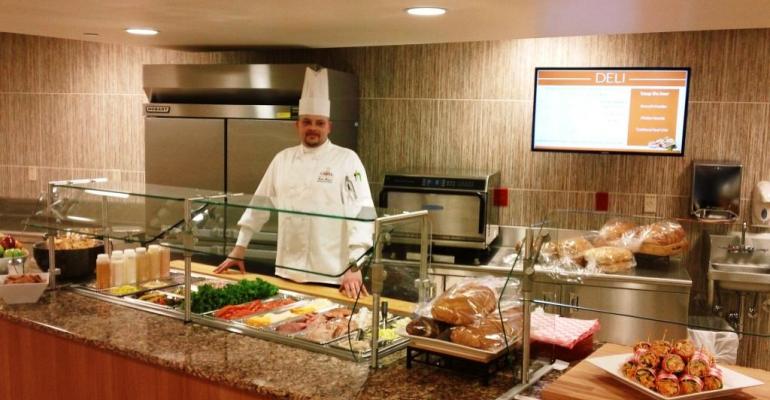 Cura Hospitality has upgraded the retail dining services at The Washington (PA) Hospital over the past year, including a menu upgrade, expanded seating and a significant improvement in the flow of guest service.

Cura Hospitality has upgraded the retail dining services at The Washington (PA) Hospital in the past year after taking over operation of the department. The changes included a menu upgrade, expanded seating and a significant improvement in the flow of guest service through better use of an underutilized space in the hospital’s kitchen.

The 1970’s style single serving line was transformed into a modern scattered food court system, including the addition of several new dining stations offering a variety of made-to-order favorites. Also, seating increased from 120 to 165, the flow of services has improved by adding a third point of sale and, as a result, sales during the first week surpassed projections by 21%.

Guests can also select items from the specialty bar, which features exhibition-style cooking where foods like stir-fries, pastas and a baked potato bar are prepared to-order.

“Prior to the renovations, our cooks and prep folks were always in the kitchen and unable to be a part of the front of the house because of space," says Rich Constanza, Cura's general manager of dining services. "Now, our cooks are out in front, engaged and excited to be part of our team.”

“The difference in the grill is increased variety, a more consistent product and all items that are available daily—which is huge since menu items prior to Cura’s arrival were only available on specific days, like fish sandwiches on Fridays,” Costanza says.

Other stations include a served deli bar where sandwiches are made-to-order, along with an extensive salad bar now three times its original size and offering an extensive assortment of vegetables, grains and other fresh ingredients, home made salad dressings, and chili and soups made fresh daily. Another addition to the salad bar is the composed salads created by Prep Cook Donna Allen (seafood salad is her specialty).

Grab-the-go foods like pre-made salads and sandwiches, as well as desserts, are also available for lunch.

Although many food stations are new, past favorites were incorporated on the menu. “Our cook, Frank Kovacicek, prepares a homemade macaroni and cheese, and stewed tomatoes are still offered on Fridays,” Costanza says.

All menu items are posted on digital signage. “The signage is contemporary and in addition to the menu items, offers fun food facts and nutrition information,” Costanza adds.

The second phase of the café’s renovations will include extending the dining room and vending services.The cafe is open daily from 6:15 a.m. to 7: 15 p.m.