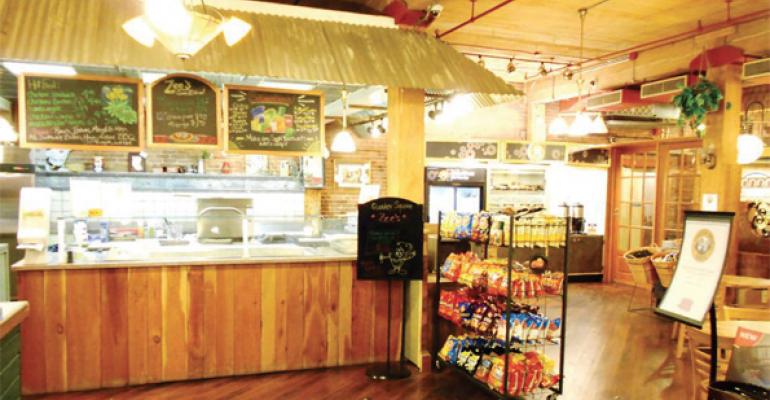 STEPPING INTO THE PAST: Listed on the National Register of Historic Places, Quaker Square's convenience story at University of Akron capitalizes on an unique historic look and feel.
Operations

The University of Akron's purchase in 2007 of the historic Quaker Square Building just off its main campus offered a unique convenience retailing opportunity that its dining department was able to capitalize on two years ago.

The building, listed on the National Register of Historic Places and originally built as a Quaker Oats factory in 1932, was designed to store 1,500,000 bushels of grain in its with 36 grain silos.

In 1970, when Quaker de-commissioned that facility, those 24-foot wide, 120 foot tall silos were converted into hotel rooms and retail space. In recent years,  Quaker Square has come to house  law and marketing firms, business tenants and some University office space. Meanwhile, its retail space is a local tourist destination, served by, among other things, the historic Cuyahoga Valley National Park Scenic Railway, which brings visitors from across Northeast Ohio to the Quaker Square stop.

Since the University's purchase of the facility, some of the it has been converted to student housing,. In 2009, Zee's was created as a hybrid c-store concept along side other retail concepts on Quaker Square's floor level.

Unlike other c-stores on the U of Akron campus, Zee's Quaker was designed as a hybrid store from the start, featuring hot and cold made-to order sandwiches, pizza and other fast casual items, as well as catering and room service for the facility's hotel room guests. It also features an array of natural and organic foods as well as a mix of health and beauty aids and convenience items.

Because of the unique, historic nature of the venue , Zee's decor, ambience and merchandising are quite different from the contemporary look and feel of the other campus retail c-stores the university is known for. It preserves a sense of time and place reminiscent of the early 20th century, with original brick wall facings, natural wood furniture, racking and basketry. Its ambience matches the"General Store" theme of other shops in Quaker Square and complements a true historic food landmark with a contemporary merchandise mix and foodservice offerings.