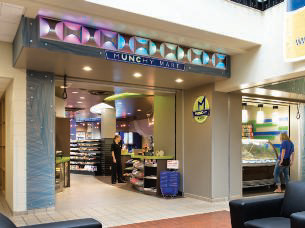 The Munchy Mart fits into a 1,200-sq.ft. space (1,000 of it retail) formerly occupied by an underused copy center that closed two years ago.

It doesn't look anything like  copy center now, nor even a standard c-store, for that matter. Rather, it is an eye-popping spectacle of color and design that also carries the full gamut of college product categories, from health-and-beauty and grocery to frozen foods and snacks. There's even milkshakes, cappuccinos, smoothies and gelato.

But it is the design that won NACUFS plaudits. Features include an eye-catching lighted sign that changes from purple to pink to blue to pink—in the blink of an eye. When you walk in, you are greeted by a fresh fruit display and apple green martini countertops that pop against the dark wood grain cabinetry.

In the store, the curved walls and trendy colors provide an inviting atmosphere. The ceiling is lit with canned and accent lighting in royal blue casings that are colorful and modern, while bubbled translucent ceiling tiles invoke the look of carbonated soda in lime green, white and orange. Even the floor seems to flow like a meandering Rocky Mountain river in gray and dark brown tiles.