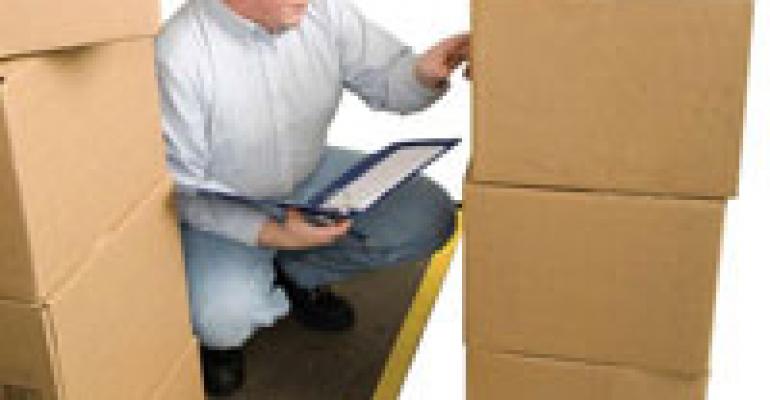 It all starts at the back door
There are many things to look for when checking in deliveries that can save the typical operator a bunch of money. For example: the receiver should keep an eye out for re-taped or re-marked boxes. While that alone doesn't necessarily mean anything, it's a red flag that your receivers should pay special attention. A sample may have been removed for another customer, and the box put back into inventory accidentally. In receiving, every ounce — and every piece — counts.

When a number 10 is not a number 10
While visiting a cafeteria, I noticed a member of the prep staff with a No. 10 can of green beans and 20 small cups. She was portioning the beans into the cups, putting them back in the can, and then doing it over again. When I asked the owner what she was doing, I was told she was being trained on portion control. I suggested it might not be necessary to go to that extreme.

The owner pointed out to me how one one “lost” portion of green beans per can could add up to $3,600 in the course of a year. He said he had to get 20 portions out of every can. “If I miss one portion from every can, that's 60 cents in profit I did not get from the can, or $3.60 I did not get on the case,” he added. “ I use about 1,000 cases in a year. That totals to $3,600 I would not get because my servers gave it away, one green bean at a time, on the serving line.” The moral? It's often worth doing a drained weight testing and comparison of net weights on your canned goods, noting any variances among brands and packs. Portion control isn't just a server's job — it's also a management function.

Another moral: Portion scales and weighing procedures pay off!

Consider a breakfast serving line that serves two slices of bacon per person and 400 servings per week, or 40,000 slices per year. Keeping in mind that an 18/22 bacon has 300 slices per box, that represents 133 cases for the year.

Country Ham, according to USDA, means the ham had to be produced in a rural area. In other words, you cannot make country ham in New York City (that's a fact).

These various methods of cooking and processing hams have an effect on finished cost, but the largest cost factor is the amount of water that has been added, or which of the four categories the ham is in.

Category one is called a “dry ham” and is the most expensive. This ham actually weighs less than it did when it was a raw fresh ham. Country hams are classified as dry hams. There are also some buffet hams that are considered dry hams.

Category two is ham with natural juice, the second most expensive. This type of ham has the same moisture content as a raw fresh ham. No water has been added.

Category four is called a ham and water product. With this type, the weight added by water is more than 10 percent of the original weight and the percent of water added must be stated on the label. There are hams with as much as 45 percent added ingredients. (Added ingredients means water and spices.)

The type of product used should be matched to the application, but significant savings are possible by speccing the right product for the job. For example, using a ham with 10 percent more added ingredients could end up saving you .30 cents per pound, or $3.00 on every 10 lb. ham — and that can add up to big time savings!