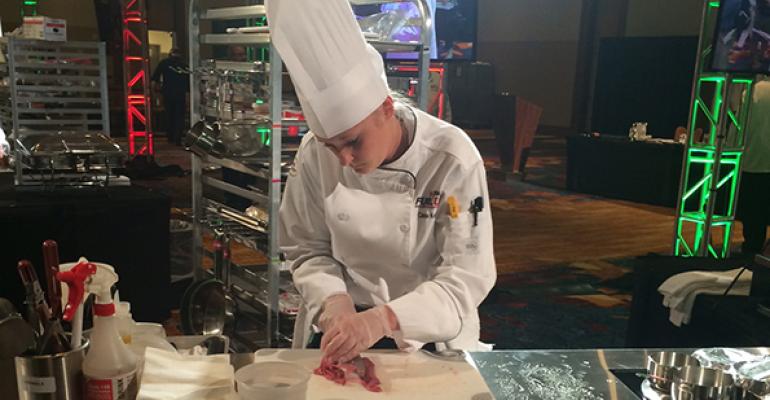 THE TOP CHEF: Cassie Kelsch of the University of Utah won the 2105 NACUFS Culinary Challenge in Indianapolis.

The college and university chefs who competed in the 2015 NACUFS Culinary Challenge are the best in their regions, having reached this point by demonstrating their skills in preparing a dish that’s as close to technically perfect as possible. Each had practiced their dish so many times in the past few months, it would seem they could do it in their sleep.

But turn on the spotlight, add a lively crowd and the watchful eye of American Culinary Federation (ACF) judges, and the pressure was at a searing level Thursday night of NACUFS’ annual conference. It’s not just the finished dishes the chefs are judged on in a competition like this. Every quenelle, every tournée, just about every movement is judged. And then of course, the judges taste the food itself. This year’s mandatory ingredient was buffalo flank steak.

The next day, the winner was announced: Cassie Kelsch of the University of Utah took home the gold with her Pan Seared Bison Flank Steak with Huckleberry Demi.

Click through to meet the chefs and check out their dishes.

Snapshots From the FM Live Reception at NACUFS
Aug 25, 2014