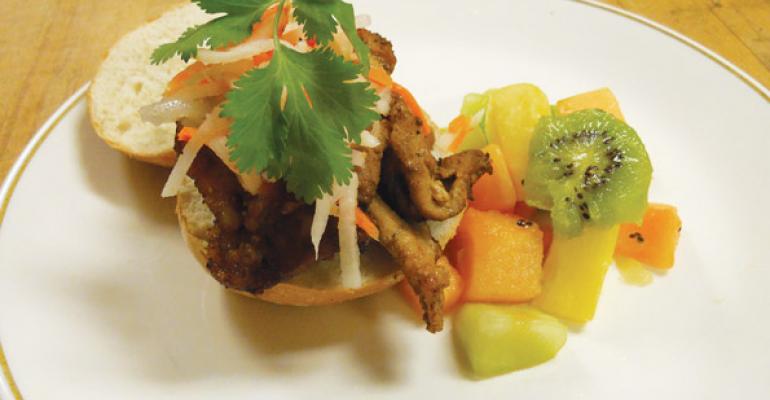 Can a Banh Mi Save the World?

Serving humanely raised pork raises several challenges, but through a nose-to-tail menu philosophy, one high school dining program is making it work, one Vietnamese sandwich at a time

Instead of signing up for sports in the spring and fall, students at the Hotchkiss School can opt to help raise hogs. There are usually five or six hogs on the idyllic countryside campus of the boarding prep school in Lakeville, CT.

That’s just one way the school community is connected with where food comes from and why it’s important.

Andy Cox, general manager/director of sustainability, Hotchkiss Dining Services, Sodexo, is a key player in making responsible eating a part of daily life. The kitchen team recently participated in a two-day workshop with a master butcher to learn how to break down a whole hog. He attends agrarian symposiums and is active on social media, focusing on such things as humanely raised pork.

Many animal rights groups have denounced the use of gestation crates as an inhumane practice, and such crates are already illegal in several states. Renowned professor of animal behavior Temple Grandin explains gestation crates as “asking a sow to live in an airline seat.”

While Sodexo is moving toward a totally gestation-crate-free future in the next couple years, Cox wondered if he could help move the process along faster at his school.

“I wanted to find out, ‘How hard is it to do this?’” he says, adding that while the hogs raised on campus provide pork for the kitchen, it wasn’t nearly enough for the 9,000 lbs. used in a typical school year.

Because of that, it was going to be a challenge getting enough humanely raised (and also antibiotic-free) meat, in terms of cost and availability. To make it more affordable, more whole hogs were needed and lesser cuts of the pig had to be used.

He worked through a vendor with nearby Lucki 7 livestock in Rodman, NY, and found the humanely raised pork, but then the challenge became finding ways to incorporate more parts of the pig into the menu and hoping the community was ready for nose-to-tail eating.

“To get the amount of ribs, butts, shoulders and bellies we needed, we had to find uses for pork loin ends and uncured raw pork hams,” Cox says. Buying a whole hog means getting the more popular cuts, like the belly, but using the lesser cuts to make it affordable. Plus, thinking in terms of nose-to-tail helped with the school-raised hogs, too.

The Vietnamese Pork Sandwich has turned out to be a great way to accomplish this. The sandwich starts with either uncured ham or loin ends, which are shaved thin and marinated.

“It’s very flavorful and the thin cut with the acidic marinade makes it tender,” Cox says.

Served on a sub roll with pickled carrot and daikon radish slaw and cilantro tamari vinaigrette with sides of cucumber-mango slaw and fruit salad, it’s a delicious step towards a more humane, sustainable future.

1. Place all ingredients in bowl and mix well, refrigerate.
2. Slice meat very thin then cut into bite size pieces.
3. Add marinade to the pork and turn to coat well, refrigerate
4. Let pork marinate at least 2-4 hours.
5. After marinating, heat a large frying pan until very hot then add the meat in batches and cook over medium heat 3-4 minutes. Do not overcrowd the pan.
6. To assemble: Place 2 oz. of pork on a roll, top with pickled carrot/daikon and garnish with fresh cilantro.

1. Shred carrot and daikon, marinate for one hour, turning occasionally. Store up to 2 days.