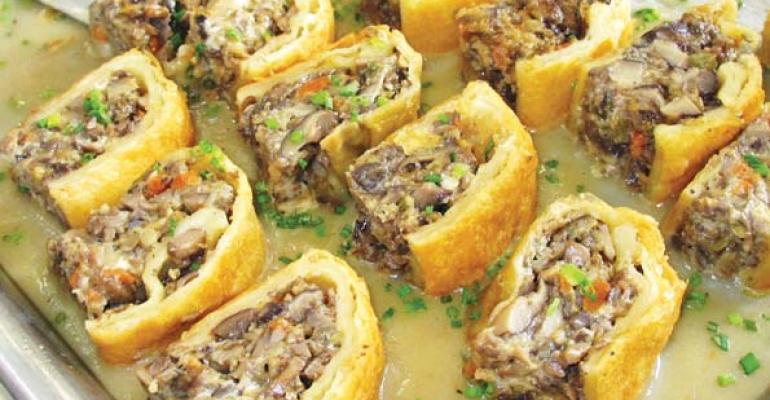 Mushroom Strudel with Gorgonzola and Mushroom Demi Glace was the winner of the entrée category in the Flik Independent School Dining-Mushroom Council Recipe Contest, held in New York City this past spring.

Months before the mushroom recipe contest, chefs at Flik school accounts considered the ingredient power of the ‘shroom. They developed recipes and then crowd sourcing came into play: students tried the dishes and voted on their favorites, which were submitted.
In the entrée category, a flaky, tangy, umami-bomb of a mushroom strudel by Scott Iwanicki dominated.

“I learned to cook from an old-school Austrian chef who grew mushrooms behind his house,” says Iwanicki, Flik Independent School Dining executive chef for the Ethel Walker School in Simsbury, CT.

That served as inspiration for this dish, which also evokes happy memories of family meals from Iwanicki’s youth that began with onions, celery and carrots, merrily sautéing on the stove. The sherry reduction adds a layer of complexity, and the velvety gorgonzola takes the dish over the top.

“I also created a risotto for the contest, but the kids loved this strudel,” he says. “It’s a great dish for early fall, and it freezes well, too.”