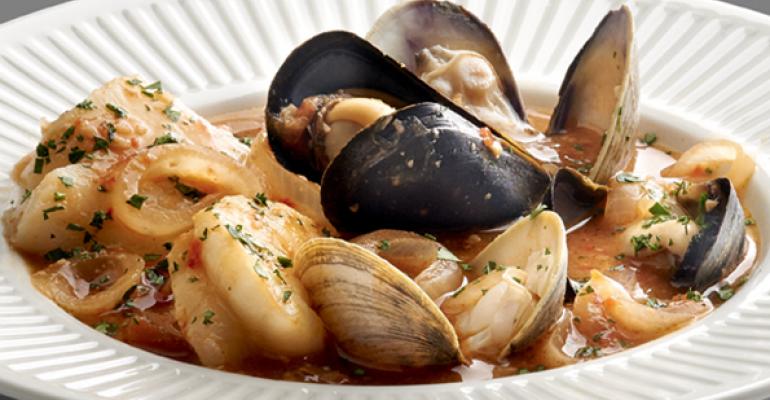 The grand prize is a trip to the prestigious Bocuse d’Or Culinary Competition in Lyon, France early next year. Kwiatkowski, who has never been to Europe, says that as a chef, this culinary travel experience will be “unbelievable.”

One of the nine soup categories in the contest was seafood, and Kwiatkowski started thinking about seafood stews that have been offered at MSU dining venues over the years.

“Seafood stews are something we do a few different ways on campus,” Kwiatkowski says. “We started with bouillabaisse and progressed onto some different Brazilian seafood stews.

Then, inspiration arrived in the form of Anthony Bourdain. "I saw an episode of “No Reservations” where Anthony Bourdain and Chef Jose Andres make a traditional Catalan stew on the beach. I thought, ‘That’s not that different from the seafood stews I make.’ I figured this was different enough…no one else would take this angle,” Kwiatkowski says.

He talked to other chefs about traditional Catalan stew researched the stew in cookbooks and online, he says, gaining appreciation for its origins.

Catalonia is a region of Spain that is bordered by both France and the Mediterranean Sea. In order for the stew to work, the delicate flavors of the seafood in the stew must never be overpowered, Kwiatkowski says.

“The thing I like best about the flavors in this stew is the balance,” he adds. “You can tastes the mussels, clams and cod.”

Kwiatkowski’s recipe starts with the hearty red sauce component: romesco, made with roasted red peppers, almonds, bread and garlic in a thick paste. Onions and garlic are sautéed in a big pot, which is deglazed with white wine. Red chile adobo paste and seafood base and vegetable base are added, along with crushed canned tomatoes. After the complex flavors simmer and blend, the seafood is added. Mussels and clams open up when they’re ready and all that’s left is an acidic shot of sherry vinegar and a handful of chopped parsley at the very end.

Testing and fine-tuning the recipe happened one day while Kwiatkowski was teaching kitchen skills to a campus group.

“I had been playing around with this Spanish stew for the contest, making some tweaks, and I thought, ‘Why not throw this at them?’” he says. So the group made the stew and, “we all said, ‘This is delicious!’ It was overwhelmingly popular.”

He’s looking forward to his trip to France, Kwiatkowski says, already plotting which restaurants he wants to hit and sights he wants to see.

“I’ve started trying to learn some basic phrases in French, too,” he says. Bon Voyage, Kurt!