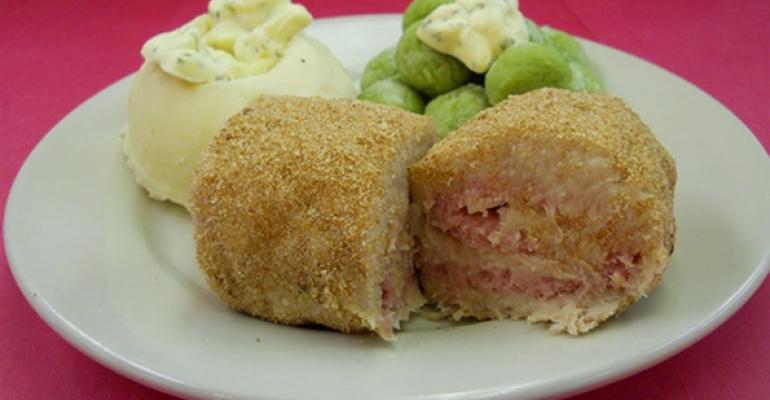 Cura Hospitality transforms puréed food into real food that preserves dignity and appeals to the senses.

Puréed food doesn’t typically conjure up images of beauty. Rarely does it make your mouth water, either. But a growing number of senior living communities are finding that, with a little extra effort, purées can not only mimic the taste of traditional fare, but also the look.

“Residents should never be restricted from the look and taste of real food,” says Alan Brown, executive chef and director of dining services with Cura Hospitality at St. Anne's Retirement Community, in Columbia, Pa.

Brown’s goal is to serve the puréed version of whatever is on the regular resident menu, be it sandwiches, fish, pie or cookies. He does this using artful techniques, tools and plating methods. He also focuses on using fresh ingredients.

Brown relies on casserole dishes to help form purées. He also uses parchment paper techniques—not molds—to create ham and beef cubes. He does something similar for carrots, which he then combines with the beef cubes for a deliciously rich stew.

To create a natural looking cucumber, peels are puréed separately and rolled around the puréed middle. Seeds can be created with thickened milk and a soda straw. The result is strikingly realistic, Brown says.

Brown uses a piping technique to create pasta and green beans. To add grill marks to meats and fish, he uses a clean piece of cardboard, and he freezes tomato juice to create faux tomatoes and other garnishes so that they look realistic, but are still completely soft. “It’s a real tomato, just made from juice,” he says.

Brown has spent the past 20 years finding creative ways to elevate purées. Brown was part of a team from Cura that developed the new puréed program, called Purée Creations, the creativity of which has resulted in a tremendous difference in the attitudes and appetites of residents on purées, the chef adds. In fact, many residents have experienced a significant improvement of their nutritional status, which Brown points out, is rarely heard of.

“Often, when seniors switch to purées, their nutrition takes a turn for the worse,” he says. “But we’ve worked really hard to ensure that taste and presentation are top notch—especially for those dining with friends who don’t follow a restricted diet.”

The palatability of a dish is also extremely important. And so Cura’s clinicians work closely with medical staff to assure residents and patients have the appropriate textures needed for safe swallowing.

“It’s a delicate balance,” Brown says. “And it takes practice.”

To help inspire new menu items, share best practices and recognize the efforts of those going above and beyond, Cura launched a four-week competition in September to see which of its communities lays claim to the best Purée Creations program.

Communities participated by submitting one photo each week for four weeks of their best puréed dish. The menu item had to be on the cycle menu.

“Anyone can create one pretty dish for judging,” Brown says. “But we wanted this to be applicable in our dining rooms so it had to be on the resident menu.”

At the end of each week, a team of judges, including Brown, reviewed and critiqued the photos. The scoring system was based upon originality, level of difficulty and visual appearance.

At the completion of the competition, Cura selected the two best programs based on accumulated points.

The first was from Jess Sorber, production supervisor, and Chris Simon, cook, from The Meadows Nursing and Rehabilitation Center, in Dallas, Pa., who created chicken cordon bleu with Brussels sprouts and mashed potatoes in an herb butter sauce.

The second was from Nick Shrewsbuty and Eric Wilson, supervisor cooks at Phoebe Wyncote (Pa.), who showcased beef stew with a corn muffin and chocolate cookies.

“The success of Purée Creations begins with the training of the kitchen staff, making sure they understand how to optimize the look of puréed food so residents eat more, relying less on oral supplements,” Brown says. “It takes time and practice, but the results are well worth our effort.”