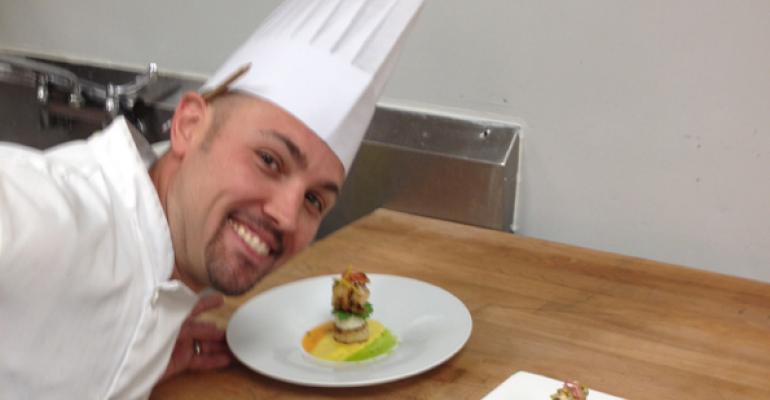 The Secrets to Cooking in a Competition

How one Canadian college sous chef stayed cool and led his team to victory at the Ottawa Culinary Federation Challenge (with powdered cheese as the secret ingredient!)

From planning the menu with a team of chefs to using a decoy recipe on local TV to dealing with competition-day nerves, Brendan Kobzan knows how to win at cooking.

The sous chef of Algonquin College in Ottawa recently led his team to the gold at the Ottawa Culinary Federation/Maple Leaf Foods/High Liner Foods/Ottawa Mission Culinary Challenge. The event highlighted the Ottawa Mission by featuring “mystery box” items that are typically donated and used by the Mission.

Kobzan spends most of his working days in the Market Place Food Court of the college, supervising several concepts and also running catering/banquet. When “a group of guys from the kitchen wanted to form a team, even though they’d never done a competition before,” Kobzan says, he was a little apprehensive, even though he has experience in competitions.

“We do make great, quality food, but we’re not used to using the rare ingredients and executing the level of preparation that some of the other teams are more accustomed to,” he says.

“The Canadian Culinary Federation Ottawa has a mandate to uphold the dignity of our profession, promote awareness and above all, we’re striving to raise up a new generation of chefs,” says Kobzan’s boss, Executive Chef Russell Weir.

Still, Kobzan rallied, and he and his team came up with an amazing menu. Here’s a conversation with Kobzan about what it takes to compete.

There’s a tremendous difference in thinking and execution in preparing food for a meal when the pot has two cups of sauce reducing, compared to a giant steam kettle that has 200-plus gallons working away.

What was the biggest challenge for your team?
Kobzan: Our biggest challenge would be getting into the mindset towards detail and portion size. It’s funny—when you’re used to peeling 150 lbs. of carrots, scraping away like crazy to a quick chop, and then someone gives you three carrots and says, ‘Okay, peel these three and cut them perfectly into a certain size and turn the vegetable into a barrel shape with seven sides, then blanch and shock them for the plate.’ What? Getting your mind into the frame where you see only perfection and quality is not as easy as you might think.

Plus, there’s a ticking clock, right?
Kobzan: Everything is about timing, especially when you have multiple components, all with different textures, flavors and temperatures. And everything has to be beautiful when you plate it.

Do you get nervous when it’s go-time?
Kobzan: I’m used to high-pressure situations and I’ve learned to control the adrenaline and nerves that come to everyone on competition day. The battle of your own nerves is brutal: you have shaky, nervous hands, and then you put a long, sharp knife into those hands. You’re cutting things quickly and focusing on making them perfect. Your time is always counting down and an accidental cut or injury is very possible. If that happens, it’s very hard to pull back and regain your focus and composure.

When a local news station interviewed you prior to the competition, you played it off like you were going to use Beer Can Chicken Tacos (which sounded awesome, by the way) and then you didn’t use that recipe. Why?
Kobzan: We decided not to go with that for a couple reasons, one being that we didn’t want our competitors to know what we had in our bag of tricks. But it’s a good recipe—using a tall 16 oz. can of beer, the chicken gets moist and juicy, it’s just amazing. We elevated the components of the taco with that dish.

How did the Ottawa Mission shelter play into the competition?
Kobzan: The teams were told that a ‘blackbox’ or mystery table would be there with items typically donated to the local mission that we’d have to incorporate into our dishes. We used the cheese powder from the mac ‘n cheese box to make a cream sauce that was whipped into some carrot for a velvety smooth spread. We used more of the powder for a sweet potato pave on the center of the plate.

How did you come up with the recipe ideas, knowing a few days ahead basically what you’d have to work with?
Kobzan: Our plan was to use as many different cooking techniques as we could, to showcase the sponsored proteins of cod, shrimp, whole chicken and pork belly. We wanted light, fresh colors of spring and summer.