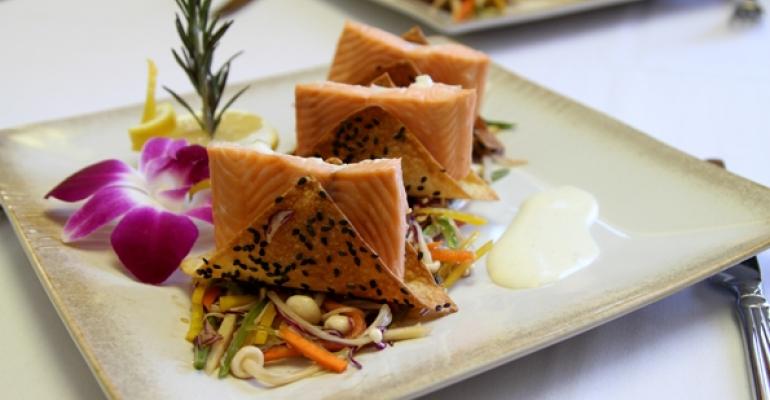 Top chefs from Ohio Presbyterian Retirement Services competed in the first OPRS Culinary Competition recently, creating some dishes that showcase the variety of sophisticated dishes being served to food-savvy residents.

The competition, which featured chefs from several OPRS communities throughout the state, was held at the Columbus Culinary Institute, with students on hand to help (and maybe to consider a possible career direction).

“I think the students were incredibly surprised at the high level of talent of all the chefs in the contest,” says contestant Michael McDonald, chef, Breckenridge Village Retirement Community North, Willoughby, OH. “I hope they walked away with a better understanding of a career as a chef at a retirement community. We need young, talented and ambitious chefs to help us transform retirement living cuisine.”

John Andrews, OPRS culinary and nutrition services director, says the contest should serve to highlight the fact that “we have a strong, competitive culinary team, and that in retirement communities today, the food is the attraction.”

Chefs had to submit recipes for the competition that fit into nutritional guidelines and cost less than $7 to produce. Each dish could have a maximum of 700 calories, less than 23 grams of fat (maximum of 30% total categories), less than 750 mg of sodium and a minimum of 7 grams of fiber.

The gold medal was awarded to Chef Patrick Young and Chef Stacy Chesney of Swan Creek Retirement Village, Toledo, OH, for Wonton Fish Tacos with Asian Root Vegetable Slaw. The plate was garnished with fresh herbs and edible orchids, making it stand out even more on a March day in Ohio. Get the recipe here.

Young says he and Chesney "kicked around a few different ideas" before deciding on fish tacos with the fusion twist of wontons. The root vegetable slaw served to up the dish's fiber content, he added.

What's it like to work as a chef in a retirement community?

"I love where I'm at," Young says. "It's definitely a lot different than working in a restaurant. We have time off, vacations, benefits...and it's not just mass produced, tray line type food. We're putting together some nice meals."

Currently, Swan Creek's independent living kitchen is cook-to-order, and two more kitchens are under construction so assisted living and skilled care will be cook-to-order as well.

McDonald says there still may be negativity attached to the idea of senior dining, but he thinks that’s changing.

“The competition was a fantastic opportunity for us, as we break away from the more traditional comfort foods of the past and introduce more contemporary cuisine and ethnic foods such as sushi, sopes, Moroccan salads and vegetarian options,” he says.

It’s a growing field. According to the Assisted Living Federation of America (ALFA), the United States has about 31,100 residential care communities, where 971,900 residents are living and eating each day.

Check out the OPRS Facebook page for more photos of the event.