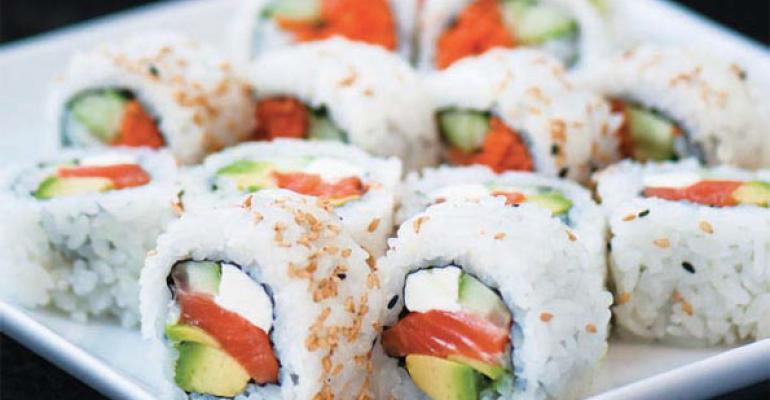 That's How We Roll

Rolling your own sushi in-house makes for a fresh customer experience&hellip;but before you start stocking up on wasabi, there are a few things you should know.

Sushi rolled fresh in front of customers is worlds away from pre-packaged product, according to operators who roll that way. We asked a few to share some sushi wisdom.

“I got familiar with sushi when I lived in Japan for a year with my brother. When I came back to the U.S., I got a job at Wegman’s (grocery chain) and that’s where I really learned the craft of rolling sushi.

“Why roll your own sushi? When I see packaged sushi that’s shipped and has a shelf life of a week—I’ve never bought that. It’s unappetizing. Sushi should be all about everything fresh daily. I’d never sell something I wouldn’t eat, and that’s how I train my employees.

“If we don’t sell it today, we throw it away. The rice gets harder, the flavors change. You can’t keep it overnight.

“We have three employees who are trained on rolling sushi. When I train people on sushi, I focus on the rice. It’s so important: everything you make, rice is involved. We cook short-grain rice in a rice cooker or a steamer—you can’t boil the rice American-style. And we season the rice with sushi vinegar, a mix you can buy of vinegar, sugar and salt. Stir that in while the rice is cooling off.

“Rolling isn’t really the hard part—cutting is harder for people, I’ve noticed. When you put too much pressure, you squish the roll.

“Sashimi-grade or sushi-grade fish comes to you frozen and that’s part of the process. Frozen means it’ll be safe to eat."

“Kappa Sushi is our self-branded sushi concept. ‘Kappa’ is a mythical water creature in Asian cultures.

“At first, we stayed basic. With a variety of just 15 rolls to start with, we perfected that and since then we’ve moved on to specialty rolls, crunchy rolls, things like that.

“Tempura Shrimp is by far our most popular roll, followed closely by the California Roll. Also really popular is the Susquehanna Roll, which is tuna, avocado and fresh crabmeat dipped in tempura and fried. It’s served with a special house spicy sauce. The Maryland Roll is unique because it’s a mini crab cake, battered, fried, and then rolled into rice with avocado and Old Bay Seasoning.

“We get asked all the time, 'Who does your sushi?' We do! The number-one reason to roll your own sushi is flexibility. If we had a national concept, we’d have to stick to that menu. I couldn’t experiment with Old Bay on a roll. This way, the sky’s the limit.

“Another advantage of an in-house concept is that I’m in control of the sourcing, the pricing, the packaging—everything. Having our own concept, I feel our staff takes more ownership of the brand this way, and they're proud of it. We won’t allow it to fail."

Training Sushi Chefs, One Roll at a Time

DiStefano: “We roll 3,000 sushi rolls a day, seven days a week in all four of our all-you-care-to-eat residential dining locations, and it’s one roll at a time. We don’t make 500 at a time and then leave them out. Every station has master sushi makers on duty.

“Student workers who make the sushi take a lot of pride in it—from the quality of how tightly it’s rolled to the sanitization of the station—they own all that.

Jung: “We have training down to a science. Each year we bring in a new class of student workers, and we pair them with our Station Champions. They get a 15 to 20 minute demo on the prep work, handling sushi knives, how to make sure the station is clean and how to prepare a basic California roll.  Then we put them straight to work. Someone who couldn’t put rice on the nori (seaweed), by the end of their shift, will have made 60 or 70 rolls.

“They get that basic knowledge in a day, and it grows throughout the semester. After four years, they really have a skill that they’ve learned.”