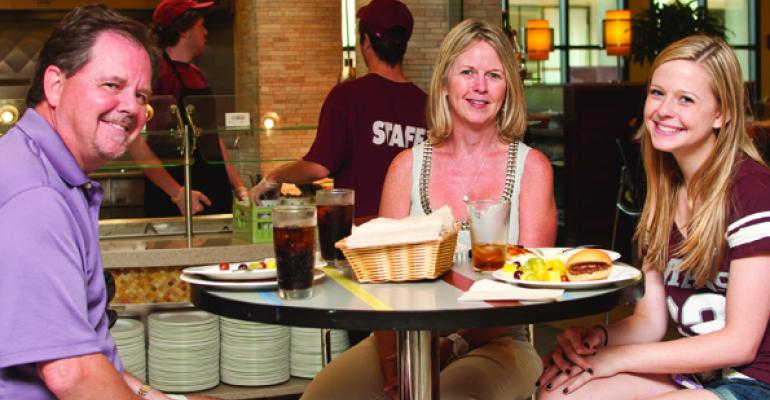 Hospitals and universities are implementing &quot;Taste of Home&quot; programs, which feature allow chefs and staff to showcase recipes, to bring comfort to customers and employees

Call it the ultimate care package. ‘Taste of Home’ programs help make your customers, staff and stakeholders feel like they’re back in Mom’s kitchen.

Home is where you hang your metaphorical hat and it’s where our earliest memories are formed. “Home cooking” evokes the tastes and aromas of an earlier time and place—sometimes far from these shores.

Those are places where, in retrospect, life seemed simpler and carefree. To channel those emotions into actual menu items, dining services across the onsite spectrum often invite and use recipes that are brought from home and modified for volume production. Recipes that pass muster (i.e., that taste good, are relatively easy to scale up and prepare, are cost effective; and use ingredients that are readily available) can be a star for the day.

From the foodservice director’s perspective, the benefits of encouraging participation are myriad and subtle, but also significant. They go well beyond the re-creation of those warm and fuzzy customer feelings.

Burnishing skills
At 470-bed Memorial Sloan-Kettering Cancer Center (MSKCC) in New York, many in the culinary staff have a wealth of culinary traditions, “but their day-to-day roles often limit their ability to display their rich talents due to specialized scheduled assignments,” notes Veronica McLymont, PhD, RD, CDN, director of food and nutrition services.

For example, some of the approximately 200 members of the foodservice staff—including chefs, cooks, production associates, etc.—may be assigned strictly to the grill, or to preparing salads, or sandwiches, or entrees.

“The inherent dilemma we faced was finding opportunities to tap their knowledge to help reduce monotony” and to keep them engaged in the larger operation, says McLymont.

One of MSKCC’s solutions is its Culinary Talent Management Initiative. In it, the executive chef encourages staff members to create and showcase their own home recipes.

The process often starts with a staff member simply telling McLymont, or Executive Chef Pnina Peled, the recipe—one that often exists only "in his or her head." This staff member is given the opportunity (as well as all necessary ingredients) to prepare the recipe in the MSKCC kitchen for a staff tasting. Not all recipes make the grade to be served in the staff cafeteria, but when they do “it’s a good opportunity for our people behind the scenes to show off their talents,” she asserts.

Have spices, will travel

When Sood Sangeeb prepares some of his authentic, traditional Indian recipes from home in the kitchen at Ronald Reagan UCLA Medical Center in Los Angeles, “he’ll bring in the spices from home, all labeled and sealed in the original packages for food safety,” executive chef Gabriel Gomez explains.

Sangeeb is one of the 45 cooks reporting to Gomez and many of the authentic spices he needs can only be procured from an Indian market.

“We’ll make a small amount of the recipe for tasting among the cooks. If they like it, we’ll do the nutritional analysis. If it fits an appropriate theme, we put it on the cafeteria menu—when the once-a-week Indian Curry Bar is up and running."

RELATED: 5 Tips for a Great Recipes From Home Program

If the dish is a hit, such as a classic Beef Birria from cook Geraldo Cruz who hails from Jalisco, Mexico (as does Gomez, himself), it may become a part of the Monday Mexican Day theme or regular menu rotation, or even featured during the medical center’s Cinco de Mayo festivities.“Fine-tuned” recipes are printed out as handouts from the menu management system for those who ask for them.

Heavenly recipes
Jeff Freshwater, director of dining services at Mount St. Joseph, a retirement home for Sisters of St. Joseph in Wheeling, WV, is delighted that many of the approximately 65 residents often cook or bake with his kitchen staff, making themselves at home, all part of management company Cura’s "Share Our Tastes" program.

Nuns who love to cook, like Sister Theresa Metz, are encouraged to share and help prepare recipes from home. (In fact, Sister Theresa’s she-crab soup has become a signature item.)

Their recipes, as often as not, are handwritten and retrieved from old notebooks or shoeboxes. “My staff or I will copy them by hand and order what we need,” Freshwater says.

The preparation and canning of Sister Rosalie’s spaghetti sauce, made with produce from the garden, is overseen by Freshwater himself under strict HACCP conditions. It has become the undisputed star during the open-to-the-public Spaghetti Dinner held each year in early November, a huge event with more than 1,000 tickets sold annually. About 200 jars of sauce are made for resale, complete with a special label.

Good vibes
Shortly after a student is accepted at the University of Massachusetts (UMass), the Development Office encourages the family to e-mail in their son or daughter’s favorite recipe(s) from  home that may be featured in the dining commons. (A UMass baseball cap is sent out as a thank you to each family that responds).

Ken Toong, executive director, Auxiliary Enterprises, recognizes there’s nothing like home cooking to create good vibes. "We can determine in advance in which of our four dining commons the student and his family will dine, and the recipe is featured there," says Toong.

The 2012 UMass Taste of Home Cookbook is in its fifth edition and all recipes submitted are included, even multiple variations on the same theme, along with the name and location of the proud family.

The cookbook—a 90+page, spiral bound, professional-looking endeavor—has become an important marketing tool for the department, since it showcases extensive and enthusiastic student involvement.

Occasionally, these recipes (scaled up for foodservice) are incorporated into the menu cycle. This year, there have been three South Indian recipe additions, all contributed by Mala Subbaswamy, wife of the new Chancellor of UMass Amherst.