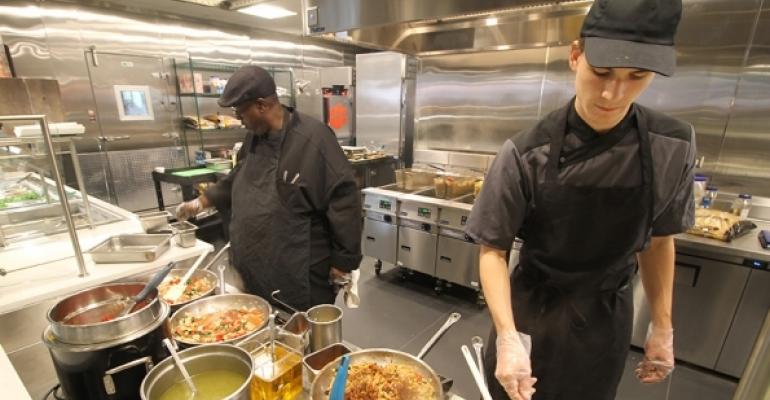 A collaboration between the university and foodservice contractor are key to the successful new venue.

A new $96 million, 260,000-square-foot mixed-use facility on the campus of Clemson University in South Carolina features 78,000 square feet of modern dining facilities, including a residential dining hall, a convenience store and branded restaurants. The grand Core Campus project replaces the 60-year-old Johnstone residential complex. It was first announced nearly a decade ago, and broke ground in 2014. The foodservice component of the project, the Fresh Food Company (FFC) seats 900 and replaces Harcombe Dining Hall, the campus’s primary dining facility for 61 years. Core Campus also features residential space for 400 honors students as well as academic space for the Calhoun Honors College. The Fresh Food Company is foodservice contractor Aramark’s modern, open display-cooking concept designed for colleges and universities. The concept is featured at dozens of Aramark campuses, including the University of Alabama, Mississippi State University, Eastern Kentucky University and now Clemson. It features a variety of stations including a deli, a pizza and pasta venue, a dessert station, a grill, a salad station and an all-day breakfast outlet.

Anthony Harvey, associate director of residential and dining facilities at Clemson, says collaboration between his department, Aramark, and the project’s architects and designers was key in “trying to give students a great facility where they’re comfortable but also create a space that can be used in different ways.”

To this end, movable seating and tables were selected, and the dining room was designed with areas that can be closed off to create smaller spaces for meetings or events. In sunny South Carolina, outdoor seating was also a consideration in planning the space. Football is a big part of campus life at Clemson, and the Core Campus is located near Frank Howard Field at Clemson Memorial Stadium, making the Fresh Food Company a popular before-and after-game destination. A glass wall in the dining room further connects Fresh Food Company and the retail restaurants to the outdoor, stadium-adjacent space.

Aramark has managed foodservice at Clemson since 1969, when it was ARA Services. Amanda Finch, Aramark’s marketing manager at Clemson, says the Core Campus project represents the university’s responsiveness to the needs of modern college students. “It’s an innovative facility that has improved the residential dining experience and showcases the culinary aspects of what we can do.”

Students like the cooked-to-order aspect and the openness of the concept, she says. FFC’s features and menu offerings were born of Aramark’s ongoing research into the college and university market. It’s a unique space that offers a dynamic and customizable menu for students, Finch says. With venues that include a made-to-order omelet bar, a vegan-friendly stir-fry station and a deli, “every meal made can be made just the way the student wants it.” At the Grill station, options include a bacon mac & cheese grilled cheese sandwich. The pasta station features made-to-order items with ingredients like green peppers, sliced mushrooms and baby spinach, as well as offerings such as the low calorie pepperoni and mushroom cavatappi. There are also allergy-sensitive and gluten-free options, something “for every need state,” explains Finch.

A popular station is the homey Southern Cooking venue, featuring a rotisserie where chefs prepare chicken, pork tenderloin and other entrees. The venue also offers up regional favorites like fried chicken, macaroni and cheese and collard greens. One of the more popular attractions at FFC are the regular Chef’s Table events, in which Aramark chefs take over a station and showcase a brand-new menu item. These have ranged from flatbread pizzas to ahi tuna. “We try to offer lots of creative menu items to expand and appeal to different palates and give the students an opportunity to try something new,” Finch explains. Students have said that new choices are important, “so menu development is constantly ongoing and evolving,” She adds.

Above the Fresh Food Company, a mezzanine level is home to branded restaurants that, unlike FFC, are not part of the university’s dining plan. These include Raising Cane’s, which specializes in chicken fingers, Which Wich sandwich shop, Twisted Taco and Starbucks, as well as a convenience store. A mix of tables and soft seating accommodate 300 guests. “They’re brands not everyone is familiar with, so it’s been very popular and drawn students from the other end of campus,” notes Harvey.

Finch says the success of the new facility came from cooperation. “Working with Clemson couldn’t have been a better experience. I was on site with a hardhat and vest, so it was very hands-on. Our partnership was very strong, but doing something this major enhances the partnership.”