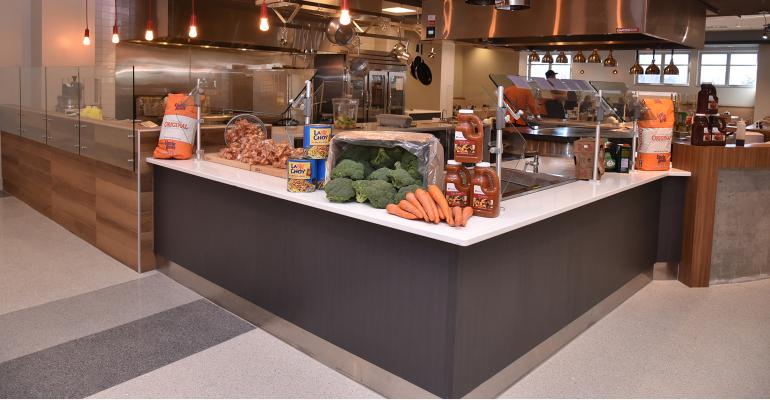 College’s new dining hall offers something for everyone

At UT-Knoxville’s newest dining facility, choice is the name of the game.

It’s no secret that to millennials and Gen Z’ers, scoop-and-serve dining is about as modern as landlines or cassette tapes. In 2017, fresh, clean food—and being able to order things your way—is par for the course for younger customers.

So when the University of Tennessee Knoxville decided to build a new dining hall, that’s what they focused on. “We listened to students who wanted healthier options and the ability to customize their meals. This provides them with the flexibility they need and the options they request,” says Senior Vice Chancellor for Finance and Administration Jeff Maples.

The Fresh Food Co. dining hall is housed inside the newly built Stokely Residence Hall. “It’s part of a grand scheme on campus where we’re renovating and building brand-new housing for student life. At the same time, we wanted to upgrade our dining facilities,” Maples says. Run by Aramark, the 33,000-square-foot facility is UT Knoxville’s first cook-to-order concept; opening it allowed the university to close one of the college’s two older, traditional-style residential dining halls. Plans to build a second, standalone Fresh Food Co. facility on the other side of campus and close the other older dining hall are currently underway.

The lunch and dinner menu offerings are designed to cater to a student population whose tastes have grown more sophisticated, and who may be dealing with dietary restrictions.

At the International station, customers can get made-to-order bibimbap, Spanish-style paella, or shrimp and broccoli stir-fry. There’s also a dedicated gluten-free station, where customers can order allergy-friendly options like kielbasa and potato hash, Latin-spiced pork roast with confetti rice or a spicy jalapeno chicken panini. Customers looking for meatless meals have plenty to choose from, too. Tofu can be tossed into made-to-order stir-fries and noodle dishes, while the grill station serves up unexpected offerings like a vegetarian Philly-style cheesesteak made with mushrooms. Fresh vegetables abound at the salad bar, along with surprising add-ins like spicy kale peanut pesto, toasted barley and chili garlic sauce. At the deli station, vegetarian and vegan options like falafel pita and portobello-pesto baguettes are offered in addition to things like chicken salad club sandwiches or turkey club wraps.

As for those who are in the mood for something more traditional? They’re still covered. Customers can order hamburgers, turkey burgers and chicken BLTs at the grill, or choose from comfort food combos like honey BBQ turkey with collard greens and mac and cheese, meatball subs with crispy tater puffs and green beans, baked chicken with coleslaw and pimento cheese grits, or seasoned roast beef with honey glazed carrots and roasted garlic potatoes. There’s breakfast too, but Maple concedes that A.M. meals aren’t the most popular with the college crowd. Athletes are an exception, though. “They tend to be on a strict eating schedule,” he says. To accommodate early risers, half of the facilities’ stations are open in the morning. Customers can choose from made-to-order omelets and scrambles, build parfaits with yogurt or cottage cheese, fresh fruit and granola, or feast on fluffy buttermilk pancakes. Hot grits and oatmeal are served in the soup wells, while those looking for something sweet can treat themselves to a selection of fresh bakery items like apple-topped cinnamon rolls, cinnamon-sugar donuts and cherry cobbler bread.

The Fresh Food Co. only opened its doors in January, so it’s still too early to tell whether meal plan participation has gone up. But that seems to be the trend, says Maples. Even though the facility seats 750 students, it nearly maxes out during the lunch rush. “We had an area [of the residence hall] that was going to be a media room space. But we had to open it up for lunch, and at lunchtime it fills up,” Maples says. Even so, customers never have to wait more than a minute or two to get their food. “There’s so much variety, so the lines are never very long,” he says. And because the stations are spread out, crowding and congestion around the lines hasn’t been an issue.

“Students are like, we wish we could have another one of these,” Maples says. Which means that so far, this new facility is getting things exactly right.