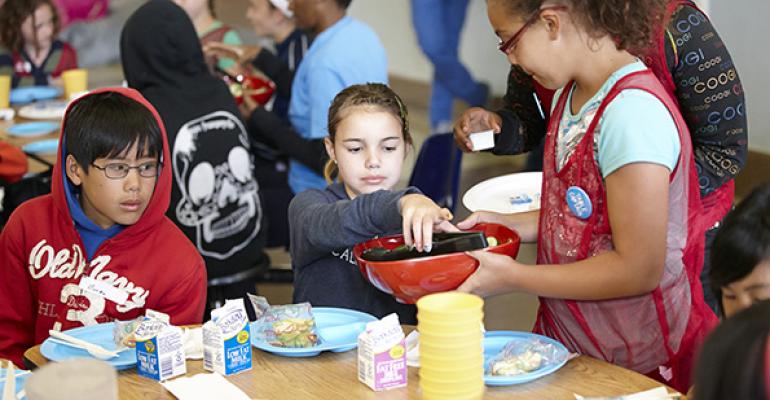 Even after removing junk food and working with local growers and producers, the San Francisco Unified School District’s (SFUSD) meal participation still wasn't great. Sixty-five percent of students qualify for free or reduced school lunches, but only 60 percent of those students were taking advantage of it.

A few years back the district started sourcing its meals from Revolution Foods, an innovative foodservice company that supplies healthy, often local meals. But when students were faced with long lines and other activities to do during the lunch period, even these meals couldn’t entice all of them to take the time to get lunch.

The district’s next step was to change the design of its cafeterias, creating a space that would be welcoming, encourage socialization, be attuned to the students’ developmental needs and ultimately encourage more students to participate in the meal program.

“San Francisco is a foodie city. People come here for the food, and we should have a school meal program that reflects that,” says Zetta Reicker, director of student nutrition services at SFUSD. “But we still had low participation in many of our schools and aging infrastructure. That’s when we stepped back and said, ‘Where is it that we want to go?’”

San Francisco Unified School District has a long history as a leader in school meals. The district had a wellness policy before it was mandated, and it started phasing out what Reicker called “carnival food and junk food” 10 years ago. “We’ve done all these great changes, but the school meal program doesn’t reflect the full potential,” Reicker says.

But that’s all changing, thanks to a 2013 grant from Sara and Evan Williams Foundation. The Foundation suggested the district work with IDEO, a Bay Area-based design firm, and thus started an unusual collaboration: a design approach to school meals.

IDEO takes a human-centered approach to all its designs, which isn’t necessarily the way cafeterias have been created in the past. The firm started by asking, “What do the students and the cafeteria workers really want and need?” says Sandy Speicher, managing director of IDEO's education practice.

To answer this question, the company conducted a 21-week intensive dive into the district's cafeterias. Thirteen hundred people were included in the process—students, faculty, cafeteria staff and parents. The participants kept journals and documented their experiences with school meals using words and photos. The district and the design firm worked so closely that Reicker even had a desk at IDEO’s offices.

From the surveys, IDEO outlined its discoveries and suggestions in a website and book.

Some suggestions were obvious but hadn’t been considered before. Kids want to hang out with their friends. “During lunch, they're like, this is my time,” Speicher says.

The age of students also should be considered. “There’s generally a one-size-fits-all cafeteria, whether you’re six or 16,” Speicher adds. So IDEO suggested cafeterias that matched the developmental needs of the student.

In elementary school, students should be moved away from the lunch line, where their decisions can take up time. Instead, communal eating is emphasized in IDEO’s suggested elementary school setup. A cart, similar to one found in a dim sum restaurant, would serve courses. Faculty members would monitor the cart to ensure students select the right meal components for a reimbursable meal. Participation and payment are all input through a mobile POS device. Responsibilities, such as serving, are divided among the students.

SFUSD is planning an IDEO-based pilot program in an elementary school, but acknowledges there are many hurtles to getting communal dining to work within the confines of the school meal program.

In high school, IDEO found that students were opting out of lunch altogether. “Their desire to be social was trumping their desire to eat,” Speicher says. A successful school lunch program for this age group would mean meeting them where they were, IDEO found. Students should be able to pick up meals at various locations, such as at mobile carts and vending machines. Students also should be empowered to make nutrition and budget decisions with information and ordering at their fingertips via smartphones and tablets on site. Meals can be ordered by phone, and prepaid cash cards and loyalty rewards cards can be used.

In middle school, the needs of students are somewhere in between those of their younger and older counterparts. Multiple points of sale would help speed things along, and movable and varied seating options help students define their space.

"IDEO gave us the framework," Reicker says. And then it was time for the implementation of these ideas and concepts. The district and the newly created SFUSD's Future Dining Experience, the name the district gave to the plan and the vision, selected the cafeteria at Roosevelt Middle School for a pilot. The new cafeteria opened in October, and the look of the space now represents the quality and care that the district puts into the food.

Brightly painted walls greet students who can grab a meal and sit in small café table with a few friends or lounge on one of the couches. Outside there’s a mobile cart for kids who want more recess with their lunch.

The space has been designed specifically for the students, says Michael Reimer, principal of Roosevelt Middle School. In the lounge area “chill out” is written in English, Spanish and Chinese, the three major languages spoken at the school.

IDEO created “those different environment so [the students] feel some sort of ownership, not only over themselves, but their space as well,” Speicher says. On the cafeteria’s second day, Speicher witnessed a girl shouting to her friends to “get one of the yellow tables!” and a group of boys slamming their backpacks down claiming the couches and exclaiming, “sixth grade rules!”

“The kids like to try the different zones,” Reimer says. The plan is for the students to rearrange the moveable furniture every semester. The space is so transformable that while the Roosevelt auditorium was undergoing construction, Reimer held the spring performance in the cafeteria.

The main goal of the cafeteria, of course, is getting the kids to eat. Anecdotally Reimer has seen more excitement about the cafeteria and more meals being served and eaten.

The district plans to monitor participation as the school year continues and more schools are redesigned. The Future Dining Experience already has begun work on the dining area of Thurgood Marshall Academic High School.

Ultimately the goal is to make the experience of eating a school lunch an enjoyable one that gets kids off the lunch line, encourages socialization and actually eating lunch, whether that’s at a communal table in an elementary school, a café table in a middle school or lounging anywhere on campus in a high school.

“Less standing around and more getting to what they want to do,” Reimer says. Isn’t that what we all want for lunch?