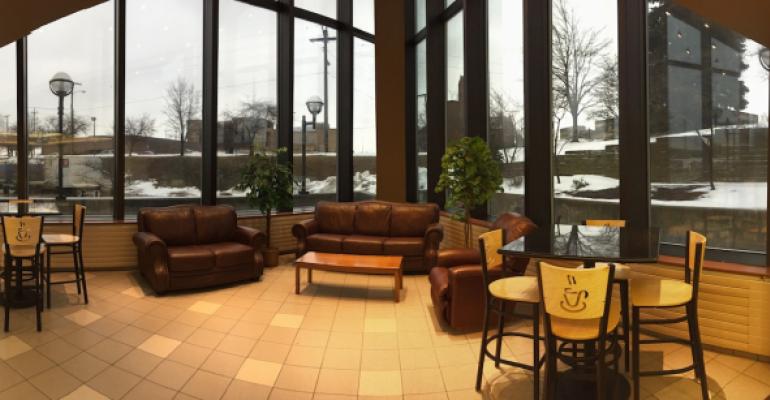 Café 1007 at Indiana University (IU) Health La Porte Hospital and Bistro 35 at IU Health Starke Hospital may have re-opened two months apart, but they got the same basic treatment: an overnight conversion that literally remade them from one day to the next. The changes included not only cosmetic alterations and the reshuffling of furniture but also the addition of some new pieces of production and display equipment to emphasize healthier choices.

The purpose of the makeovers, says Terri Faulkenburg, IU Health’s assistant director of food & nutrition services who oversees both operations, was to make the eateries more attractive and also healthier. “Diabetes and cardiac issues are very prevalent around here,” she notes.

Café 1007 at La Porte opened in March, followed in May by Bistro 35 at Starke.

“We had a go-live date and prepped for two days,” she says about the initial project at La Porte. “The night before the grand [re-]opening, my staff and I came in and we shut the cafeteria seating area down at 6 in the evening and did a whole transformation of the dining room. I had found a couch, love seat and chair that nobody was using and made a nice sitting area with a coffee table. We also added a nice throw rug and a couple of bistro tables just to make it look a little more homey. Plus, we now use linens and put flowers on the tables to help take away the institutional look.”

In the servery, additions included a sauté station and grain bar while existing areas like the pizza station and grill were expanded or modified.

La Porte is licensed for 220 beds, though the average daily census is more in the 100 to 120 range. The building also includes an eldercare facility for which IU Health nutrition services prepares meals.

Starke, a much smaller (15 beds) hospital located in a rural area, was also beneficiary of an overnight café renovation, turning its retail dining outlet into the modernistic Bistro 35.“When we redid the cafeteria at Health Starke, we just decided to go in and do everything,” Faulkenburg says. “We increased the size of the salad bar by adding more options and brought in a stir-fry sauté station, a newer refrigerator and a lot more healthy options like a grain bar. As at La Porte, we also redecorated with new pictures and added flowers and tablecloths on the tables.”

Unlike the somewhat more urban La Porte, Starke’s rural demographic is basic “meat and potatoes,” Faulkenburg notes, and she worried about the reaction to some of the menu changes, so she made sure to talk to the staff to get their input before designing the revamped menu approach.

So far, results have been all positive, she says.

“The new sauté station has brought in sales unbelievably. It is the centerpiece. People can pick the vegetables they want, then the meat, sauce and grain and get it sauteed fresh to order. We also didn’t know how well the grain bar would go over since it has unusual things like flaxseeds, quinoa salads and a variety of different healthy options, but it also was very well received.”

The grain bar is combined with the salad bar so that customers can conveniently weigh out their choices from both bars in a single transaction.

“We did leave the grill area open, which is cook to order, but we now have a wider variety of food that is more healthy,” Faulkenburg explains. “Yes, we still have the cheeseburger, but we also have more specials that are healthier at a discount, so they cost less.”

Strategic positioning also helps. “We don’t have anything within five feet of the register that’s unhealthy at either location,” she says.

Neither prices nor check averages have altered much from before the renovations, Faulkenburg says, but customer counts certainly have, with transaction volume boosted by more outside sales.

“We are getting a lot of business people from the area walking in here for lunch, as well as the older community,” she says. Faulkenburg did an open house for seniors when Café 1007 first opened and that has helped spread word of mouth. The amount of outside visitors has just about doubled now, she estimates.

“The cafe is packed every time I go out there now,” she says happily.