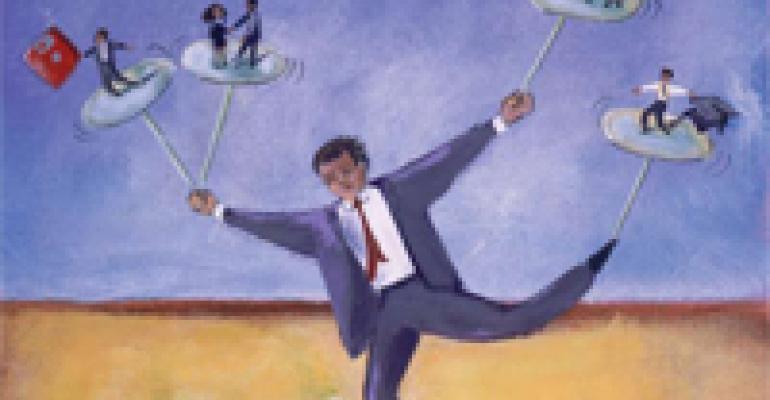 How to Tap Your Inner Hardhat

The key to successful project management is understanding that it is a long term process with many players and different agendas.

A basic tenet of internationally famous management guru Peter Drucker is that the effective executive accomplishes his or her goals through other people. And in the context of a construction project, there are certainly many “other people” involved! These other people may or may not report directly to, or have a direct relationship with, the food service executive who is ultimately responsible for the successful performance of the food service project.

In our onsite food service industry, construction projects for a new facility or for the renovation of an existing facility can be described in two scenarios: Scenario 1 are those that are principally food service facility projects and Scenario 2 are those where the food service facility that is being constructed or renovated is a part of a larger project. Examples include a food court that will be in a new college student union versus a kitchen and cafeteria that is part of a $300 million dollar hospital expansion project.

Both scenarios require a thorough understanding and application of project management techniques. However, the latter situation — where your project is an integral part, but not the primary focus, of the overall project — requires a much more nuanced approach.

Scenario 1 is essentially like a foodservice project accomplished in the commercial, for-profit, world. The objective is to maximize the positive benefits in terms of economic performance from the investment of tangible and human resources.

The foodservice director/executive and his/her internal team have, usually, very direct and significant control over the design of such a project and the selection of the principal players on the team: the consultants, architects, engineers and contractors. Obviously, the FSD must respect the approved space allocation and project budget, but beyond that there is considerable latitude in which to maneuver.

In Scenario 2, in which the foodservice project is sometimes a relatively small piece of a much larger project, the primary purpose is not foodservice, as with a major addition to a medical center or a new pharmaceutical research complex. Therefore it calls for significant political skills and diplomacy on the part of the FSD. The diagram Typical Construction Project Players (see above) illustrates many of the principal disciplines and organizations that can be — and usually are — involved in this category of project.

In years past, host organizations — a college or university, or a hospital or a corporation building a new plant — would manage the design, development and construction process with internal personnel. However, with changing environmental regulations, community pressures and financing techniques, today's world is considerably more complex. As a result many organizations now hire professional project managers — often called program managers — to coordinate the whole process from concept to completion.

These project/program managers then in turn hire the architect and other principal consulting firms, as well as the general contractor and the specialty sub-contractors. They manage the allocation of space and budget to the various “user groups,” such as the foodservice department.

It is not unusual to have 40 to 60 user groups involved in a major project. Each has its own agenda, its own needs and goals and its own justification for those needs. Not surprisingly, there is never enough space nor budget to go around. This means foodservice becomes one of many interests competing for limited resources, and success in the competition is determined by multiple factors.

One of the major factors is preparation. Those user groups that come to planning sessions with well prepared, documented, rational and clearly presented operational and functional programs substantially increase their odds of getting their share of the available project resources. Foodservice directors/executives who understand the project development process, the relationship between the players and the orientation of each of the players can develop their arguments based on how their needs support and complement the overall project.

Another critical reason for clear and concise program support materials in a Scenario 2 situation is that many of the key players may be experts in their professional fields — say mechanical engineering — but may not have experience with contemporary food service facilities. For instance, their conception of a food serving space may be one that assumes that there is only one short order area that needs an exhaust hood, whereas, of course, with modern point-of-service preparation concepts, four or six or even eight display cooking stations may require exhaust systems. Or, the logistics consultant may not understand that the foodservice department receives six tons of product each day, so a receiving dock located a quarter of a mile away is not really a great idea.

Alternately, a team member professional may have great expertise in one area of their profession but may not be experienced in other areas. For example, the interior designer may have created a number of very impressive public spaces and corporate offices, but may have never designed a food serving facility and may not be familiar with materials, finishes and colors that work best in this kind of environment.

Scenario 2 projects also take longer. It is not unusual for a project to span six to eight years from concept to completion. Renovation in-place in a hospital environment means a phased construction process so that no meal period is skipped.

An extended project timeline means that people change, concepts change and escalation diminishes available project resources. In practice, these factors can mean that decisions made early in the process that you thought were final may not turn out to be “final” later on.

Unless your department's needs are well documented and understood by the key players and by new members who come onto the project team over time, they are subject to being modified in the later stages of project process. For example, as resource allocations diminish or are modified, the surface finishes originally picked are downgraded, and features and special amenities supposedly committed to are deleted unless their value is appreciated and understood as being important to the success of the project.

It is impossible in an article of this length to do any more than just scratch the surface of the project development and management process. Key to your success and the success of your project is understanding that project management is a long term process with many players. Each profession and discipline involved has its own agenda, and the better your program aligns with the overall mission and goals of the project, the better your chance for success.

Paul Hysen is principal of the Hysen Group consulting firm (www.hysengroup.com). He has been a consultant to the foodservice industry for more than 35 years.