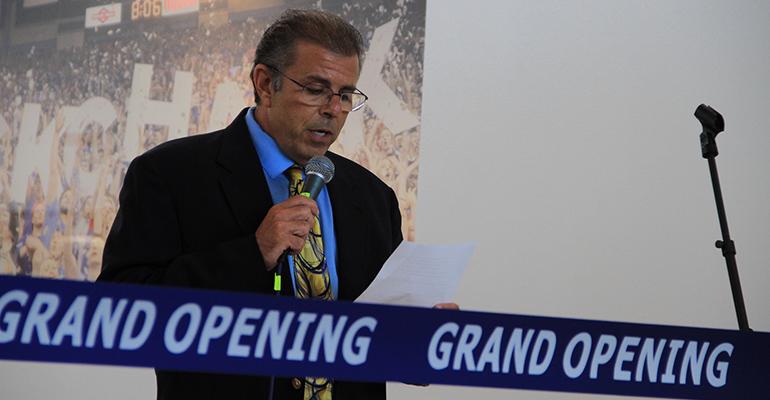 The concepts range from a vegan, grain and allergen-free stations to one that takes diners around the world in 21 days and one boasting the reportedly largest salad bar in town.

Opened in conjunction with a new residence hall, South Dining Commons is the latest addition to the campus dining mix at the University of Kansas in Lawrence. Boasting a dozen food stations specializing in to-order service, South has been serving some 2,000 students a day since it opened its doors in early August.

Besides standard station concepts like a grill and pizza, South features an all-allergen-free outlet called K-You, a completely vegan station, a global foods station that promises to “take you around the world in 21 days” and what is the largest salad bar in Lawrence if not the whole county, according to Dining Services Director Mark Petrino.

On one side of the salad bar is a station that rotates grains like quinoa and bulgur to which diners can add various vegetables and proteins. These are then individually sautéed by staffers and served in a bowl that the diner can season with a variety of sauces.

Distinctive touches also include hand-cut fries—“we have a french fry room in the back where people are just cutting potatoes all day long,” Petrino notes—and an entrée station that features a rotation of carved meats with sides. A customized deli concept called Brellas offers hot and cold sandwiches that are made to order. Customization is also the order of the day at the pasta and Tex-Mex stations. The pasta station has been especially popular at lunch in the early going. “People love being able to grab their own ingredients and watch the chef cook it in front of them,” Petrino says.

The global foods station, which currently features a daily rotation of 21 distinctive cuisines that include fairly exotic ones like Portugal and South Africa, has been a big hit in the evening, to Petrino’s surprise.

“The chef and I were laughing when we put this station together that we may end up being the only two people eating there,” he says. “But it’s become the most popular station at dinnertime!”

While some of the rotated cuisines, like Chinese and Thai, could be expected to draw crowds, Petrino says there were also surprises, such as Greek and especially German. “People really seem to enjoy the weinerschnitzel and spaetzel,” he offers. South Dining Commons features a dozen food stations with fare ranging from eclectic global and all vegan to allergen-free and totally customizable.

The station—which generally serves three to five entrée selections from the featured cuisine, including at least one vegetarian option, plus sides—has more than just a culinary purpose.

“We want to make sure the students don’t stop learning when they leave the classroom,” Petrino explains. “We want to expose them to many different cultural foods and we make them as authentic as possible, even if we have to go to Kansas City to get ingredients.”

Signage and posters offer “fun facts” about the cuisine and culture being featured to generate interest and interaction.

Only two of the stations, plus the salad bar, which converts to a yogurt/fruit/granola bar, are open for breakfast: one offers traditional breakfast items while the pasta station serves as a customized omelet station.

“Another great thing about this building is that in the back of the house we have a cold prep commissary that makes all our sandwiches and salads, and cuts all the meats and cheese, for our entire campus community,” Petrino explains. It also includes a bakery that also produces for the entire campus. South Dining Commons has seen about 2,000 diners daily since its opening.

The commissary replaces an older, much less efficient central kitchen. “We wanted to make something new and modern with the latest technology and equipment that we could get,” Petrino offers. For one thing, the older kitchen didn’t have a bakery so “everyone baked their own stuff, so we took all the bakers from the different units and brought them into this wonderful new bakeshop, and they’re enjoying it quite a bit.”

South replaces an older dining center called Oliver that was located next to where South now stands. That was closed and South built from the ground up.

Meanwhile, the old Oliver kitchen has been converted to a kosher production facility, “so we now have kosher food on campus,” Petrino notes. He says that kitchen will start making packaged kosher foods for retail sale before the end of September and will also produce food for a weekly kosher meal at South.

“If that becomes popular, we’ll do it more times a week and keep adding to it,” Petrino promises.

South has about 450 seats indoors plus another 50 on an outdoor patio.