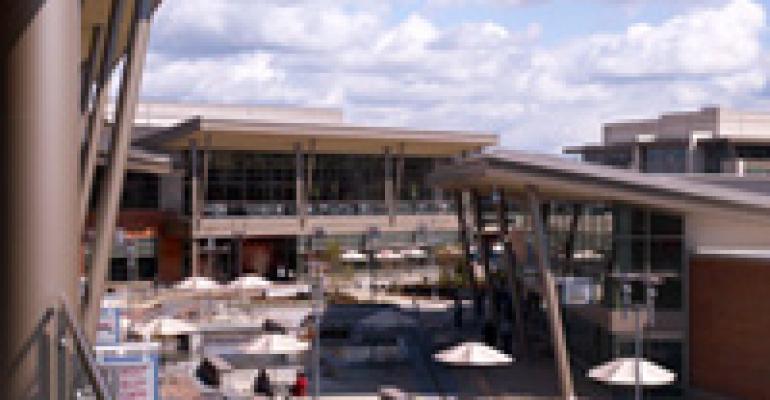 Microsoft’s West Campus Commons opened in April at the site of the former Eddie Bauer’s headquarters, which Microsoft purchased several years ago. The complex, intended to house the company’s Entertainment and Devices unit, includes four office buildings, a visitor’s center and three buildings that comprise the Commons. One houses Spitfire, the campus sports bistro that offers tableservice dining at lunch and catering for groups by reservation in the evening. The complex includes a host of dining stations and cafes sporting locally prominent foodservice brands (for more on that aspect of the operations, see our July cover feature.

The other two buildings are the communal areas that house the various dining, shopping and other retail services being offered to Microsoft employees. The buildings are named Mixer and Submixer.

Here’s a rundown of what’s in each…

Mixer has the bulk of the dining outlets. The first floor includes the circular Post Alley Café island, where employees can get specialty coffee and tea drinks, as well as a fresh juice bar and an ice cream shop featuring locally made frozen treats.

Nearby is the Pike Place food and retail court, a mini version of the Seattle landmark (complete with the iconic big clock). It includes a bakery, deli, hot food bar, salad bar and grab-and-go cases with both chilled and frozen selections. There are also retail stands featuring noted Pike Place retailers selling selections of their notable inventories, and the occasional performance by musical groups who usually perform at the original Pike Place Market in Seattle.

Around the corner is Streets of Asia, a series of four Asian themed food stations developed by the Typhoon Restaurant Group.

Other than dining, the first floor of the Mixer building offers an array of retail services, including a credit union with two ATM machines and full-service banking; a post office outlet; East Side Ski, which repairs, sells and rents bikes in the summer and skiis in the winter, along with associated apparel and accessories; and Untethered, a series of four branded cell phone retailers—T-Mobile, Verizon, AT&T and Sprint—that serve as platforms for Microsoft’s various mobile communications programs.

Finally, there is On Stage, a fully equipped cooking display stage (including hood, convection oven, etc.) where chefs from the various onsite stations can hold demos. The stage is also available for non-culinary demos and performances (in fact, T-Mobile recently did a product launch there). The proceedings are captured by a high-definition camera and telecast on two 52” high-definition monitors.
A grand staircase near Untethered leads to the second story, where the dining mix includes Soups, Chandy’s (organic/natural selections), Flying Pie Pizza, Steamers (seafood selections) and Quincy’s (burgers).

They are near the four 100-seat meeting rooms that can be consolidated into one by removing the portable walls.

The upstairs dining area offers a great view of the Cascade Mountains and the windows also overlook the sports/recreation area outside, with its basketball, beach volleyball and bocce courts. That area can also be used for catered barbecue events and will soon be home to an herb garden grown in a series of large pots.

The dining options in the Submixer building are Mayuri, featuring Indian dishes from its three tandoori ovens, and Acapulco Fresh, with a large salsa bar and Mexican specialties served from a production area inside an island station (meat dishes on one side and vegetarian on the other).

The core of Submixer is a demo area outfitted to resemble a series of four living rooms where clients (onsite by invitation only) can try out new devices from Microsoft’s Entertainment and Devices division in a comfortable atmosphere.

Nearby is Mode, an organic salon with four massage rooms where employees can get their hair styled, their nails done and even their eyebrows waxed.

Rounding out Submixer’s array of services are a branch of the local Watson Kennedy gift/card shop and an exhibit area where Microsoft employees can show off their creative talents and have them judged by their peers. Freeman says the area may also eventually display works from area professionals.