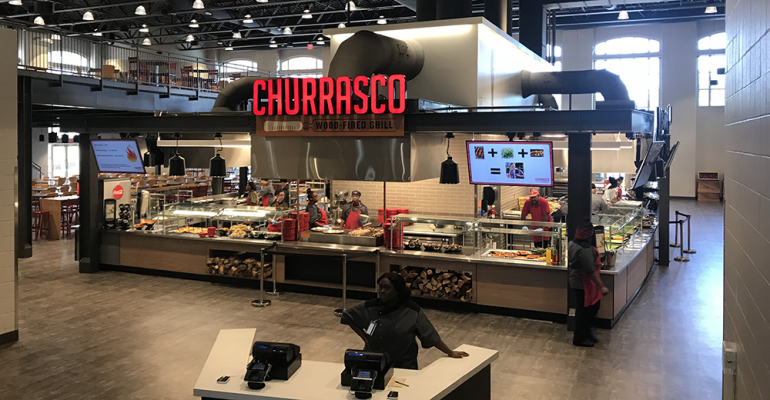 Kristina Patridge/Bama Dining
Churrasco and its wood-fire grill is the centerpiece of the new Lakeside Dining Center.
Operations>Design

Lakeside Dining sits in the midst of the campus residential section of the University of Alabama (UA) in Tuscaloosa. With some 7,000 students living in close proximity, Lakeside has been the school’s busiest dining venue since its debut a dozen years ago.

Unfortunately, it was not its best designed, lacking under counter spaces and support mechanisms at its serving stations. That necessitated a lot of running back and forth between the stations and the production kitchen by the staff. Kristina Patridge, director of services, estimates it at around 10,000 steps a day per employee, which may be wonderful for individual health but not so much for operational efficiency or timely customer service.

But now, a renovation completed this past summer that totally overhauled the venue has changed all that. 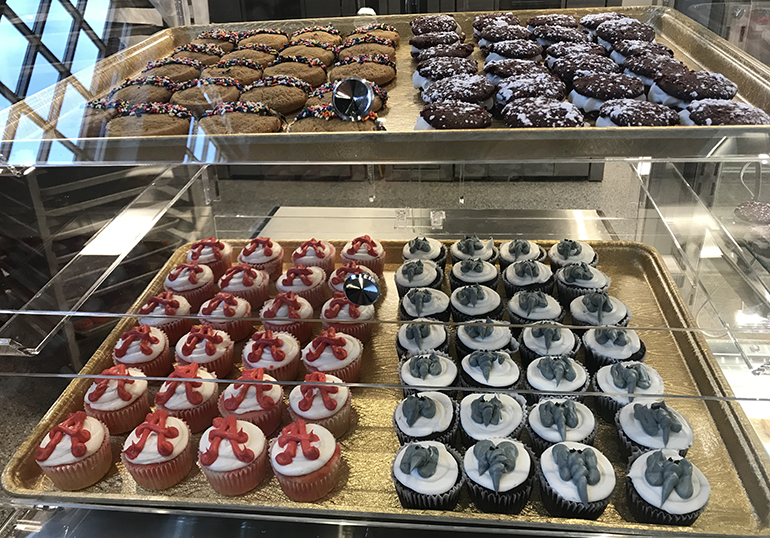 The renovation moved the bakery operation from the back-of-the-house production kitchen to the servery, where customers can now see these sweet treats being made.

“We basically blew up all of the existing micro kitchens and central pod,” Patridge explains. “We still have the big kitchen in the back but it’s mostly not needed because we have a prep room up in the front, in the core of the [servery], so it’s now really one big kitchen that has different venues all the way around it.”

The prep area includes a large walk-in cooler and even a cold room for salad bar prep operations while the former main production kitchen is now relegated to pre-processing duties such as vegetable slicing and dicing for the hot veggie and salad bar areas. Even the bakery operation, which used to be tucked away in the production kitchen, is now up front, so students can see the cookies, breads, rolls and cupcakes being freshly made.

The centerpiece of the renovated facility is probably Churrasco, a wood-fire grill station, where a rotation of different proteins as well as vegetables is prepared in a way that appeals to multiple senses.

“If you walk into the facility, you can look down and see the fire going while the wood smell really draws you in,” Patridge observes. “It definitely has been the biggest hit so far.”

Next to Churrasco is 1831 Kitchen and its array of side dishes, followed by a gluten-free area where students with food allergies can safely get something to eat. Other stations include a salad bar/deli, a traditional grill, a pizza station and a station with 16 woks lined up and ready to prepare customized grain or noodle bowls. 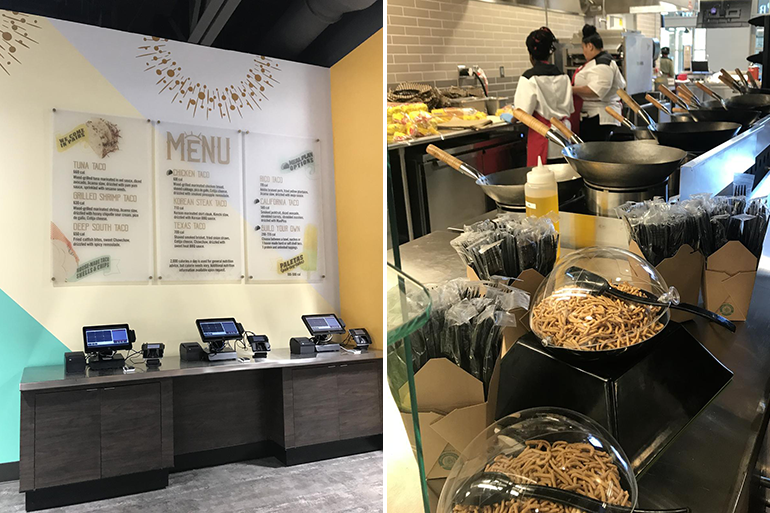 SOLA offers preorder kiosks (left) to facilitate transaction speed and complementary chicharrones, chips and salsa to customers while they wait. An array of 16 woks at the bowl station offer diners customized grain or noodle bowls with a range of protein, topping and sauce choices.

“One thing that we learned from students is that variety is not different recipes, it’s having the essential items—proteins, vegetables, starches—in a format where [diners] can custom create their own,” Patridge says. “So there really has been a big emphasis with the equipment package that everything is not your traditional institutional batch cooking, that it’s individualized. What we tried to do was to bring an element of retail to residential [dining] because who knows what’s going to happen to the residential experience? We feel it’s kind of going away in a lot of instances, and so we wanted [Lakeside] to not feel like an all-you-care-to-eat dining hall, but like a retail venue.”

Lakeside is one of three residential dining centers on the UA campus, along with Burke and Fresh Food Company, a brand-new facility that opened four years ago in conjunction with a new retail food court. All the venues are managed by UA’s dining services provider, Aramark, and each is distinct to provide different dining experiences for students, Patridge says.

“We like to say that each dining hall has its own personality. Burke Dining Hall is in a very small community, so it’s more like family dining there, and while Fresh Food Company is very much made-to-order, it’s a little different format [from Lakeside and Burke], so they each have their own identity, their own personality.”

Lakeside is certainly the busiest, especially in the morning and evening because of all the residence halls nearby, with daily counts that can sometimes exceed 4,000. To accommodate that, the renovation created a new mezzanine section and 400 additional seats. 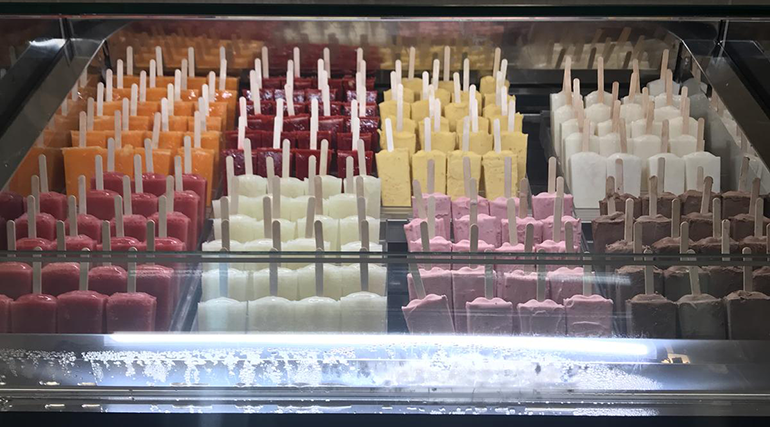 The SOLA retail outlet in the Lakeside complex offers its own line of popsicles made with its own popsicle machine.

In addition to its impact on student meal options and overall satisfaction with the campus dining program, Lakeside’s opening has also contributed to a boost in faculty and staff meal plan sales, Patridge says, “which is a nice byproduct.”

Lakeside opens at 7 a.m. for breakfast and stays open until 8:30 p.m. It then reopens with a late-night menu at 9:30, staying open until midnight and offering a variety of programming such as trivia contests and DJ nights.

Opened along with the renovated Lakeside was a separate new retail dining outlet called SOLA, which offers a Mexican cuisine-based menu of tacos and tortillas, complete with its own tortilla maker and wood-fired grill. It also offers preordering from an automated kiosk and complementary chicharrones, chips and salsa for those waiting for their food.

A special additional feature of SOLA is its popsicle machine, based on the locally famous Steel City Pops concept, which turns out a rotation of eight different flavors ranging from classic creamsicles to ones made with real fruit.