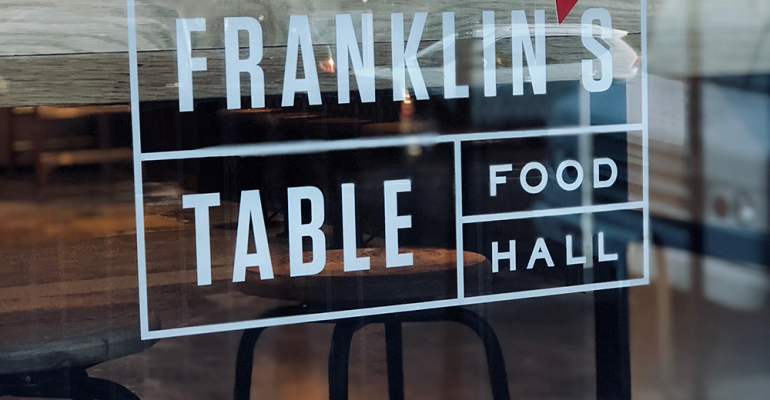 Franklin’s Table was transformed from a food court into a community-centered food hall featuring an array of local vendors.

Earlier this year, Franklin’s Table—a new food hall at the University of Pennsylvania in Philadelphia—opened to great fanfare. It features an array of local restaurant vendors serving up everything from falafel and sushi to pastries and wood-fired pizzas.

“Penn has repositioned this space as a food hall in alignment with our overall Retail Master Plan, a project that seeks to bring to the Penn community a vibrant mix of local entrepreneur retailers at a variety of price points in a fast-casual setting,” says to Ed Datz, executive director of real estate for Penn Facilities & Real Estate Services.

Formerly, the 10,000-square space housed the Moravian Food Court and featured mostly national fast-food chains. The goal, according to Datz was to recast the operation to better promote community dining while showcasing the unique culinary scene within Philadelphia.

Architecturally, the space is modern, open and welcoming. Two- and four-top tables are peppered around communal tables, while tall ceilings and industrial-style lights add to the ambiance.

The vendor stalls in Franklin’s Table are slightly smaller than they were in the Moravian Food Court, but the quality of food and the variety of cuisines are far more vast. In fact, according to Datz, the hall has been satisfying meat eaters and vegans, organic juice lovers and ice cream fans alike.

“Where we used to have four operators, we now have seven,” says Datz. “And each one hits a really important note of diversity on campus. Together, we’re taking the benefits of a diverse group of restauranteurs and presenting them in a common dining space.”

The new food hall is open weekdays from 7 a.m. to 8 p.m., Saturday from 10 a.m. to 7 p.m., and Sunday from 10 a.m. to 5 p.m. High Street Provisions and the Juice Merchant are the only two stall that open at 7 a.m., offering coffee, pastries, sandwiches, salads, juices and smoothies between the two of them.

The other five vendors focus on lunch and dinner.

As part of the buildout, each of the outlets was designed by Penn’s architect, then further customized by each vendor. Penn acts as the landlord, but Datz and his team continue to monitor traffic and sales.

“This food hall is extremely complementary to other dining options on campus,” he says, adding that Franklin’s Table joins several other new eateries that have come online over the past year. “We have everything from ‘fresh air food plazas’ straight up through white-tablecloth fine dining.”

Over the summer, camps with kids as young as five dined alongside college students, patrons in their 70s and student athletes.

“We’ve learned that curating seven independent foodservice operators takes more time and care,” says Datz. “Their needs are greater, but so is the outcome.”