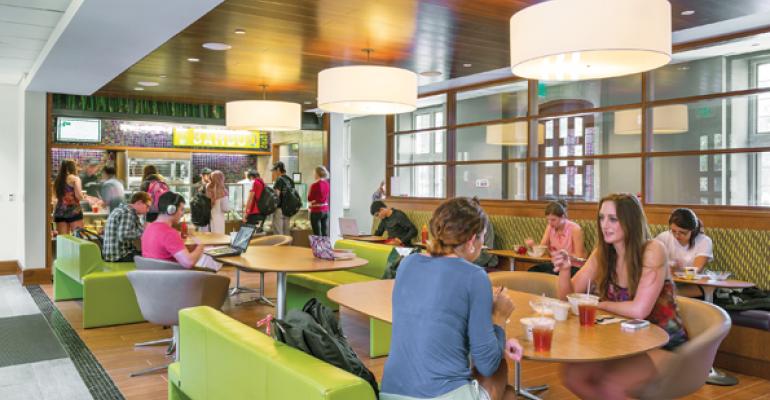 <p>Bamboo Bistro in Vanderbilt&rsquo;s renovated Alumni Hall is designed to be a campus socialization space.</p>
Operations>Design

The other is a quick-service destination café called Bamboo Bistro located on the main floor of the school’s recently renovated historic Alumni Hall.

Rocket Subs offers chef-crafted sandwiches and soups ordered from two iPads mounted in a 8-foot rocket. The orders are then printed in the kitchen while students shop for sides and beverages.

The menu includes space-themed sandwiches such as the Apollo (with Roast Beef, Turkey, and Ham), Titan (Genoa Salami and Pepperoni) and Mercury (Flame Roasted Vegetables). They can be enhanced with “Fuels” such as Red Rocket Sauce and pesto mayonnaise.  There are also a variety of house-made soups in fresh-baked bread bowls. The Flaming Tomato with Havarti cheese is a student favorite.

In designing this new restaurant concept, “We wanted to offer a fun, casual restaurant for students that offered the delicious subs they enjoy,” says Vanderbilt Campus Dining Director Camp Howard. Rocket Subs has realized a 39% increase in sales for the fall semester over the previous concept placed in that location.

Just as successful is the Asian-themed Bamboo Bistro, which serves traditional dishes such as Pho noodle bowls, Asian salads and Banh Mi Sandwiches. The noodle bowls are fully customizable, allowing students to select their own broth and toppings to suit their taste. Bamboo Bistro augments the Asian themed menu with a wide selection of teas, coffees, and Asian inspired desserts.

“With the renovations of Alumni Hall, we wanted to create a unique food concept different from any other location on campus that would attract students to this new space,” Howard notes. “This café is the focal point of the main lobby where students gather to socialize and study.”

The Alumni Hall renovation was designed by Bruner/Cott Architects of Cambridge, MA.

UCLA Steps Up to the Plate With Health Themed Dining Hall
Feb 12, 2014