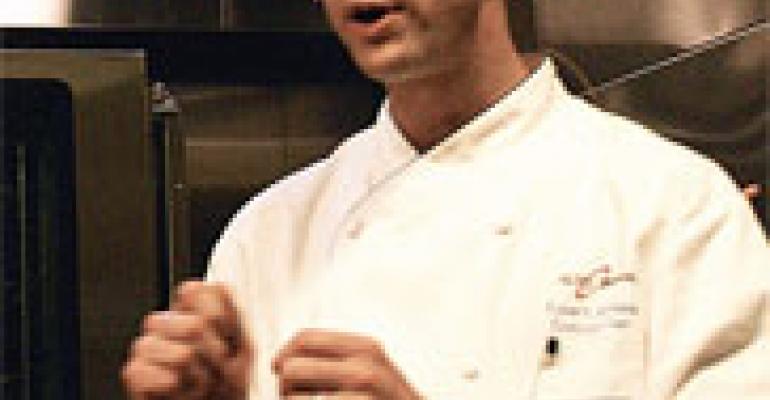 5 Tips for Better Combi-Oven Use

Robert Simmelink, executive chef for Alto-Shaam, Inc., often has a crowd around him when you find him performing demonstration cooking at national and regional food shows. He's an expert at getting the most out of the unique cooking features combi-ovens offer. We asked him to identify a few of the most common and useful combi cooking applications that users tend to overlook.

This is exact temperature cooking. Think of it as similar to sous vide cooking, in which water is held at a consistent, set temperature. Food in the vacuum pouch can only get as warm as the water (and not above, thus not overcooking.). Low temperature steam can cook the same way. Put a seared steak into the oven at 132F° steam and, within 15 minutes, the steak is exactly 132F°. It is still brown and flavorful and ready to serve. Since the steak was cooked slowly it will not bleed out when cut into. Where this is truly advantageous is in banqueting. If you have 50, 200, 800, 1200+ raw steaks, they will not all be the same thickness. So if you cook with high heat they will all end up at a different “doneness.” With low temp steam, all the steaks will end up with the same internal temperature.

Some fresh breaded items and flash-fried foods can be oven-fried in a combi. Because of the steam-supplied humidity, the oven can be cooking/frying food at 400-425° F without burning the coating or breading. This heat makes the oil in the breading hot and fries the crust around the food.

Labor costs' large impact on operating budgets means it's not always feasible to offer all the amenities one might want. If you want to offer a 24 hour room service program in a hotel or healthcare facility, the food can be cooked ahead of time, chilled and rethermed on an as-needed basis. This can be done in two ways without a chef present.

Technique 1: After chilling, food can be pre-plated by entre, along with all components mentioned on the menu (e.g., grilled fish, meat or chicken, alongside gratin potatoes and asparagus). When an order comes in, a room service attendant pushes the preheat button on the combi, gets the premade plate from the cooler and, again using a programmed button, re-therms the meal on the plate with the cover still on before transporting it to the room.

Technique 2: The other option is to have all the cold food held in pans a refrigerated cooler or in cold drawers. When a guest orders a meal, it is quickly assembled on a plate, covered, re-thermed and delivered.

Browning and roasting in combi mode

I find that chefs/cooks sometimes forget to preheat an oven or leave the door open until the oven cools. They then load it full of cold or frozen food and immediately start cooking in combi mode. The heat and steam come in, but because of the cold food, pans and oven, the steam condenses back into a liquid, causing the food to cook more slowly or to not develop the correct color, flavor, or texture. By using the programming feature, you can compensate for this heat loss by programming a dry step first, or humidity control in combi mode.

Most ovens do not get cleaned regularly because it is time-consuming and needs to be performed during a non-production periods. Combi ovens are self-cleaning when used with a cleaning tablet. It's dissolved in water and sprayed on every surface of the oven. Then the oven can be set to steam clean itself and go into a sanitizing and drying mode followed by automatic standby. This means that at the end of the night your cooks can put the oven into clean cycle and just go home. In the morning the oven will be clean and ready to use.
— JBL