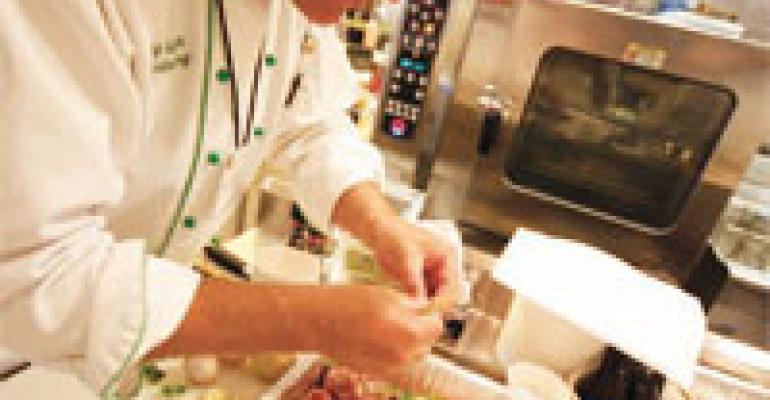 Combi ovens have changed the way chefs cook and how dining departments plan meals. Here are factors to consider in buying one.

Combining convection oven and steamer capabilities into a single cooking cavity has been one of the great foodservice innovations of the past several decades. If you don't have a combi-oven yet, here are some aspects of their purchase and use to consider.

The combi oven name comes from the fact that the unit combines three modes of cooking in one oven - cooking with steam, with circulating hot air or using a combination of both. The combination mode is used to re-heat foods and to roast or bake; it decreases overall cook times, reduces product shrinkage and eliminates flavor transfer when multiple items are cooked simultaneously. The steam mode is well suited for rapid cooking of vegetables and shellfish. And the hot air mode lets the combi operate as a regular convection oven for baking cookies, cakes and pastries.

For example, many types of red meats and poultry products are well adapted to combination cooking because they can be prepared so many ways. Steaming of vegetables and fish, of course, is easily done. The steamer/oven operating in the combination mode, mixing forced air convection for even browning along with steam for moist heat to reduce product drying is wonderful for many types of foods.

Breads and rolls baked in the combi mode will be fluffier and have more spring than those baked in traditional ovens. Rethermalizing leftovers and heating prepackaged frozen convenience foods also works well in the combi mode, where it can help avoid over-drying and over-browning.

From a kitchen layout and space point of view, the really great thing about a combi is that it essentially puts two pieces of equipment in the space of one. In today's “shrinking” kitchens, this can free up space for other items or just add some badly needed work space. The space saved can translate into cost savings as well.

Because less exhaust hood footage is required there can be significant, ongoing operational energy cost savings. Still, combi ovens are expensive. And if you are planning to put a combi oven in place of two or more pieces of equipment, be sure that the menu and type of operation will not require the unit to handle different functions simultaneously. While a combi oven can steam one item and convection-cook another, it can't do both jobs at the same time!

There is a relatively newer type of combi that promises to make owners happier about the cost of these units. A number of manufacturers have engineered a lower cost line of combi ovens that will appeal to operations on a budget. This type of combi is the boilerless unit.

When the expensive boiler component is eliminated, the resulting steamer/oven is about 15-20% less costly than a similar sized counterpart, which has greatly expanded the combi's potential market. The only drawback is slightly reduced steam output needed in high volume fast cooking. In many applications the difference in the units is not noticeable.

There is an added benefit to boilerless combis: a reduction in liming problems due to hard water. Over half of combi maintenance problems are due to excessive scale and lime build up, which can be largely eliminated in a boilerless model.

The oven/steamers available today range from small volume countertop units to floor-mounted roll-in units with large capacities for banquets or high volume operations. Typical sizes are stated by manufacturers in standard steamtable pan (12"×20") or baking sheet pan (18"×26") capacities. Note that shallow 2 ½" pans are typically used in the sizing ratings. You will need to reduce capacity accordingly if you use the 4' or 6" pans that would be most typical for casserole items or lasagna.

Most manufacturers make several of the more popular oven sizes used in restaurants. The most common ones are the four to six 12" × 20" pan capacity countertop units, a seven to ten pan unit and the larger floor or stand mounted 14, 18, and 20 pan models. The smaller units generally hold only a 12"×20" pan or half size baking pan. The larger units hold two 12"×20" pans on each shelf or a single 18"×26" baking pan.

When selecting equipment, you also need to be aware of and perhaps choose among several options. Several manufacturers have multiple lines of combis from basic to deluxe with varying amounts of programmability or other options. Look carefully and buy the options you need — but don't over-buy. Each step up in features will generally add several thousands of dollars, even for small counter-top models.

Most all units are fully stainless steel inside and out, with a glass window. They are generally easy to clean. Several models even have a built in spray hose for washing out the interior and speed up the cleaning process.

Be sure to take special care to maintain these sophisticated pieces of equipment. As with all equipment that uses water - from steamers to ice machines - the water that is fed into a combi should be treated with a filter system. Filters will slow mineral deposit build-up in the unit's water lines and water contact areas. A filter will also reduce the buildup of scale on a combi oven's heating units, water probes and cooking chamber, helping it operate efficiently throughout its life-cycle while reducing the amount of time required for cleaning and maintenance.

We are seeing new features on combis each year. One of the biggest trends is in programmability. Newer, fully featured combis have touch pad picture programming. This allows you to add pictures of the products you produce to specific programmed buttons on the touch pad screen. A cook only need to find the picture of what he or she is cooking and the combi will take it from there. Another oven option is the capability of reading product barcodes to select particular cooking programs. For example, the combi's scanner will recognize a barcode from a boxed frozen convenience item and start the corresponding cooking program. No need to think about any settings - just put the product in a pan and in the combi!

One manufacturer has taken fast combi cooking to the next level by adding another mode — microwave cooking. This manufacturer produces a special oven with the three modes of a combi oven and an additional cooking mode using a microwave assisted cycle.

There are other subtle advancements in combis being made by several of the main manufacturers. One improvement is in enhanced fan design for more even air movement. Another is better self cleaning options for those who want to pay for this labor saving feature.

Perhaps the best thing about the combi is its wide appeal to just about every segment of the industry. It has attracted fans from healthcare dietitians to fine dining and hotel chefs, with all embracing its precision cooking and speed. This appeal will continue to spur additional features as combis become even more universally adopted.

Dan Bendall ([email protected]) is a principal of FoodStrategy, a Maryland-based consulting firm specializing in planning foodservice facilities. He is a member of Foodservice Consultants Society International.