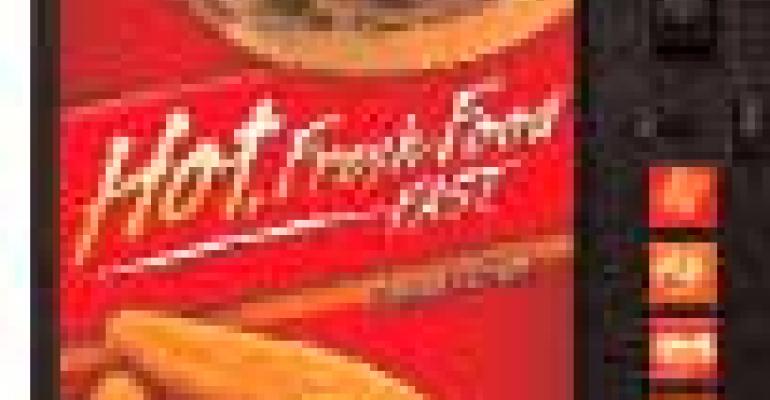 The Evolution of Machine Cuisine

Onsite foodservices face numerous challenges, among them whittled-down lunch "hours," decreased populations and a rising need to provide some sort of viable meal service during off hours or at remote locations. Vending can be a cost effective solution, given improved product offerings and full-meal, branded selections; technological advances in machines and payment options; greater choice of healthful items; and upscaled presentation.

Yet the vending industry itself is grappling with just how to answer smaller needs and niches profitably, since that represents a very different business model from what the industry relied on for years.

"The history of full service vending in the U.S. has been highly dependent on a large manufacturing sector, with large numbers of employees," explains Tom Kearney, vice president, marketing for Canteen Services in Rye Brook, NY.

"That's the ideal market. But as head counts have diminished in recent years, and changes in purchasing habits have come into play, the industry is having to adjust with new services offered in nontraditional ways."

"Offices with under 500 people make up 90 percent of all workspace in the U.S. today. That's a profound change. Onsite dining is now moving more toward a P&L, as opposed to a subsidiary, business model. We know that 500 people is the industry standard as the break-even point for P&L. So when there's no primary market for a cafeteria, the location becomes a potential vending opportunity."

As Kearney adds, "we're becoming more aggressive in identifying the business model that works for smaller accounts," by trying to increase and "make vending a destination of choice."

Setting the Scene
Mary Spicer, director of nutrition services at Presbyterian Hospital in Plano (TX), contracts with Canteen for vending services, and echoes the importance of having a destination atmosphere to operate a successful program.

"We don't have our vending machines stuck against a wall," she says. "They're integrated into the spaces they occupy, making them more inviting. They're not an afterthought."

Spicer says vending was included in the design of the hospital's new eight-story tower, with special nooks to house the machines.

Since the cafeteria closes daily at 7 p.m. and is completely shuttered on Sundays, the machines are a necessity for third shift employees, overnight visitors and anyone around on Sundays. Located outside the cafeteria and in locations families are reluctant to leave (pediatric, ICU, ob/gyn), they offer snacks, cold beverages, specialty coffees, ice cream and cold, fresh-made foods.

Spicer recommends that operators complete a vending "self assessment" before discussing needs with a vendor. "The Society for Healthcare Foodservice Managment (HFM) developed one of these for its members and the feed back on its use has been very positive," she adds.

Mike Ryan, senior vice president for business development at Sodexho Vending Services, notes that, "Aesthetically, vending has made a major leap forward versus just a few years ago. There's greater investment in graphics, area treatments of walls and state-of-the art looks such as glass fronts of the machines. This approach has been proven to increase sales because customers feel more involved in selection process."

At Yuba City (CA) High School, Food-service Director Nadene Haynes decided two years ago to purchase 15 vending machines that would offer both hot and cold meals. These augment the school lunch program on an open campus of 3,000 students with a half-hour lunch period.

"We originally went into this to create more points of sale," Haynes says. "But we also hoped the program would do three basic things: keep students on campus, get the Associated Student Body organization out of the food business and enable us to sell more nutritious foods than what they had been selling." (Haynes' department now shares vending profits with the ASB.)

Not only did the program accomplish those goals, but overall sales increased, too, even in the cafeteria. "That was a mystery at first, but we discovered that when students stayed to check out the new vending bank, they also got a chance to see the quality of food being served in the cafeteria. This was something many had not explored before," explains Haynes. Students who stay after school into the early evening hours also appreciate the availability of more substantial foods, she says.

Haynes opted for six hot and nine cold food machines. Her department operates and loads the machines, using Tyson and Kraft products for the hot meals, and producing fresh-made shaker salads, wraps, and even sushi on occasion (brought in from offsite) for cold options.

Although she notes that some of the frozen products are "a bit high in fat," most are "the same products we purchase for school lunch through the commodity program."

At Washington Regional Medical Center in Fayetteville, AR, Foodservice Director Sherri Williams is in the middle of a six-month trial of two hot food machines that offer chicken nuggets, tenders, strips, sandwiches and burg-ers. So far, the reviews look encouraging. Initial trials indicate "everyone really likes the food—they can't believe it comes from vending machines. If things keep going this well, we will continue to lease them."

The products, priced from $1.75 to $2.50, present a more acceptable option than the fresh foods that were previously offered in cold machines, Williams says. "Before, customers had the impression that the sandwiches and salads were a day old, even though they were brought in fresh. The branded aspect has really helped the image."

Although not a big money maker (the machines average 17 vends a day, pulling in about $300 a week for the department), Williams notes they're vital for customer convenience.

Serving Satellite Locations
For Tim Dietzler, director of dining services at Villanova University in Philadelphia, vending offers an extension of the dining program into remote campus areas. Equipped for use with students' meal plan debit cards, the six machines offer a combination of cold foods like sandwiches and milk; upscale, individual frozen dinners that can be microwaved; and hot food (rethermed within the machine), such as breakfast sandwiches, pizza, chicken fingers and fries.

The keys to the program's success, Diet-zler says, are using signage to explain that the fresh offerings are made onsite daily, with dated labels, and stocking well-known brands in the frozen and hot food machines. "Brand recognition is very important to get the students to initially try these products," he says.

Dietzler currently has out on bid a proposal to increase the number of hot food machines on campus to as many as 15, with four or five going into some of the larger residence halls and others in high traffic areas. He acknowledges, however, that "it's a big up front commitment on the vendor's part, to place that many machines on campus. If the contractor can't do it, we've thought about buying the machines ourselves, and see if the contractor will fill them."

Going Cashless
By next fall, Dietzler is also expecting to have every one of the 200-plus vending machines on campus (including snack and beverage units) hooked up to online access with a cashless system, using readers to either subtract the transaction from a student's debit or "food points" account.

Most vending industry experts agree that cashless systems are the wave of the future, but just how quickly they'll be implemented hinges on several factors. One is credit card transaction fees, which is not a factor with campus debit card systems like Villanova's.

"Most vendors can't take three to four percent off their margins and still turn a profit," argues Sodexho's Ryan.

"The industry's hope is that the impact of such fees will decline with increased sales, higher check averages and multiple transactions," says Ralph Sanese, president of Sanese Services, Inc. of Columbus, OH.

Besides physical swiping, the technology also exists for customers to simply wave a credit or debit card in front of a sensor that uses radio frequency identification (RFID) to complete the sale. "This RFID technology has proven reliability and we have the capability to do it," Kearney says.

"There's a constant request for healthful items and programs. It's the top question when we talk to companies about vending services," adds John Loughran, director of vending services for Sodexho Healthcare.

To respond, the three largest contract companies have all recently upgraded or expanded their healthful vending programs. Aramark adapted its nationwide Just4U healthy dining program for vending, with over 150 products that use different, colorcoded check marks to identify whether a product is lower in fat, carbohydrates or calories.

Sodexho launched a Wellness & You, On the Go vending program that features items which have been screened to comply with set guidelines (based on the Food Guide Pyramid and certain medical organizations' suggestions) for fewer calories, lower fat and sodium content (and no trans-fat), and improved fiber count. To broaden the program's reach, the machines now feature dietary information in Spanish as well as English.

Canteen's Balanced Choices program, which comes with specially-designed machine fronts for quick identification, feature a computer in the vending area which allows customers access to the nutrition make-up of any item the machine carries.

Patty Guist, Director of Associate Programs and Services for Hu-mana, Inc. in Louisville, has taken her Ara-mark healthy vending program to another level—by subsidizing seven "wiser choices" per machine. The price cuts aren't a lot, but she says they've still had a significant impact.

After a two year trial, "We saw a 32% shift in the types of snacks purchased and a 2% shift in beverages. What's more, overall vending sales went up 19.3%."

Although the cost to sustain the subsidy is $20,000 annually, Guist explains that she makes $22,000 on vending commissions, which counterbalance the expense.

"On an individual basis, it's $4.00 per person, per year," she says. "The main goal of the program is education. By trying to effect change in people and encourage them to make better choices, we are hoping to save more money in the long run on health care costs because of overweight and obesity-related problems."