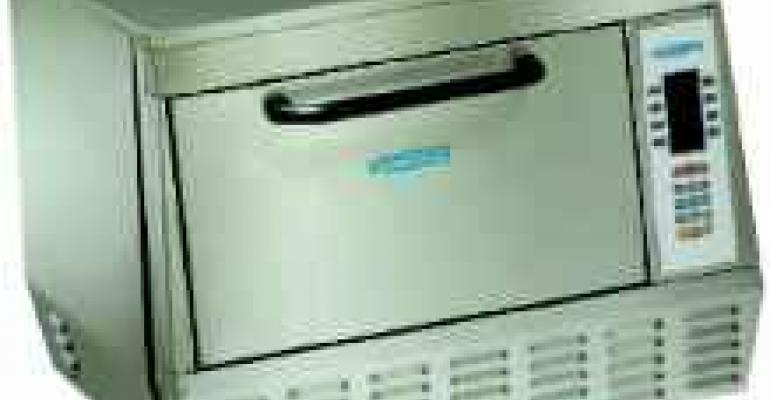 Speed and quality are the name of the game in foodservice. The challenge is to provide fresh food fast while not needing to employ an army to pull off the feat. Manufacturers have responded with several new and improved types of high-speed cooking equipment.

One of the most established highspeed cooking items on the market today is the induction cooker. Induction cookers work by generating a magnetic wave at the cooking surface. The magnetic wave actually produces no heat itself, but when you place a pan with a magnetic (iron or steel) base on the cooktop, the molecules in that base start to move quickly, causing heat. The result is very even, instant and controllable heat.

Induction heat has been shown to be faster than gas in cooking tests. It's also more energy efficient than gas or conventional electric heat. Since almost all the power consumed goes directly into the pan and not into the surrounding area, air conditioning and hood exhaust requirements may be less than when using conventional cooking sources.

Induction is now just breaking into American kitchens. In Europe, however, induction kitchens are common. Look for more heavy-duty production equipment to be introduced to America in the next few years. Meanwhile, induction is catching on for those who operate buffet lines and cafeterias. It's well suited for an omelet station or a stir-fry area because there are no open flames to cause a possible fire hazard. On the buffet line, induction is also excellent as a chafing dish warmer. The controlled heat can be set below cooking temperatures.

Many operators believe falsely that using induction means you will not need an exhaust hood. On the contrary, in many locations you will need a hood because your are still releasing cooking fumes to the air. Technically, a hood should be provided whenever cooking is done. In a few instances you even need a hood over units intended to warm buffet items, even though you may have no intentions of cooking.

One manufacturer has developed a unit that has been accepted by local-code authorities just about everywhere. This induction warmer has several fixed-temperature settings limiting the temperature at the maximum setting to just over 200° F. Watch for other innovations in induction cooking in the next few years. It is an up-and-coming way to cook.

Supercookers
Another type of high-speed cooker is a hybrid that will be common in the future, manufacturers say. Supercookers are items that use either multiple heating methods introduced into the same piece of equipment or are new forms of cooking technology. They are truly one of the few new technology advancements in foodservice equipment in recent years.

Supercookers combine some of the best features of convection, microwave and impingement ovens to create the fastest quality food producing units ever introduced. Supercookers are the new multitask ovens that can cook a wide variety of products faster than anything previously on the market.

The new generation ovens promise to deliver food so fast it will change the way operators think about producing food. Because of patents on the new technology, each company has its own twist on how to "supercook" food. Two of the more popular cooking methods use combinations of cooking types.

Oven Varieties
One style oven made by several companies combines uses both forced air (similar to that of an impingement oven) at the same time as microwave radiation. As superheated air is forced over the food to brown the outside for taste and appearance, microwave energy penetrates to the interior of the food and heats it through.

Another hybrid oven also uses microwaves but employs high-intensity light-wave energy as the second heating source. Similar to the microwave hybrid oven, heating occurs very quickly; no preheating is required and the units cook in a fraction of the time of conventional ovens. Each approach is geared to provide extremely fast cook times.

How to take best advantage of the supercookers may be the most difficult challenge for operators. The units are generally small, which is good, since they can easily fit into existing kitchens. They can often be installed without an exhaust hood, making installation of electrical power the only utility consideration. You need to work with an equipment supplier and may even want to try a demonstration oven to ensure this is the right product before you spend money on one of these units.

The supercookers do have some limitations, including cost. Many of these supercookers have super price tags that range from a low end of about $3,000 up to as much as $10,000 or more. You need to weigh the payback of cooking speed versus cost for your individual operation. The units are also not a replacement for all your cooking capacity and may not be suitable for all your existing menu items. They may have limitations in volume of product cooked simultaneously, though some of the lack of volume is offset by sheer speed of operation. Users will need to experiment with recipes to determine how to adapt cooking time and temperature for a specific item to the units.

Manufacturing companies have stepped up and made a significant contribution to new technology in foodservice equipment lately. Most importantly, the new high-speed cookers fill a need to serve a high-quality product faster. Many operations in their quest to meet customer desires are ready for induction units or a supercooker. In the near future, manufacturers have guaranteed improvements, more variety of products and even more user-friendly features. Keep watching for more significant improvements in the near future.