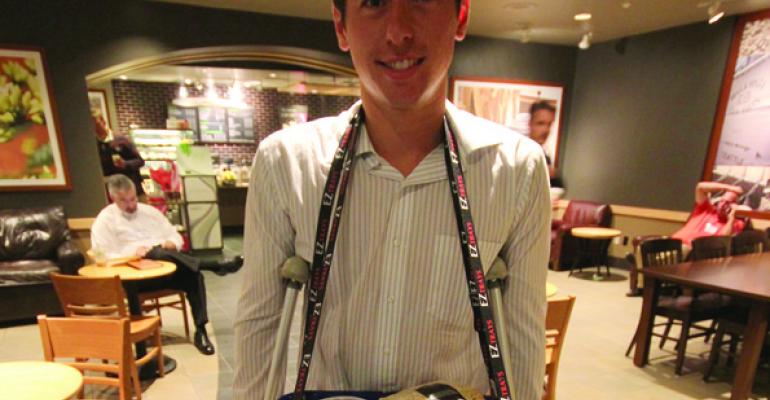 Middlebury student produces dining tray for those on crutches

It’s a potential problem in any dining hall: a customer on crutches or one with difficult mobility. That makes balancing trays—or dishes in trayless environments—a huge challenge.

It was one faced by Ed Fitzgibbons, a Middlebury College student when he broke his leg in January 2011 and had to be on crutches for 12 weeks.

“My friends tried to help but it was still very difficult,” he says.

Fitzgibbons is an enterprising sort, though, so he tried to come up with a workable solution involving the use of a tray that hangs around his neck.

Through much trial and error, he finally developed a workable model that is stable even when carrying beverages in glasses or bottles and which can be put through a standard warewasher. It certainly impressed Middlebury Dining Director Matt Biette, who suggested he might want to market it to others in the same situation.

Thus was born E-Z Tray. Fitzgibbons, now fully healed and completely mobile, was seen at the recent NACUFS National Conference showing off his product to dining directors. Several were impressed enough to put in orders and Fitzgibbons now has a client base of about 20 colleges. He says healthcare facilities are an obvious next target.

The product comes in sets of six (3 large and 3 small). For more information, go to www.eztrays.com.