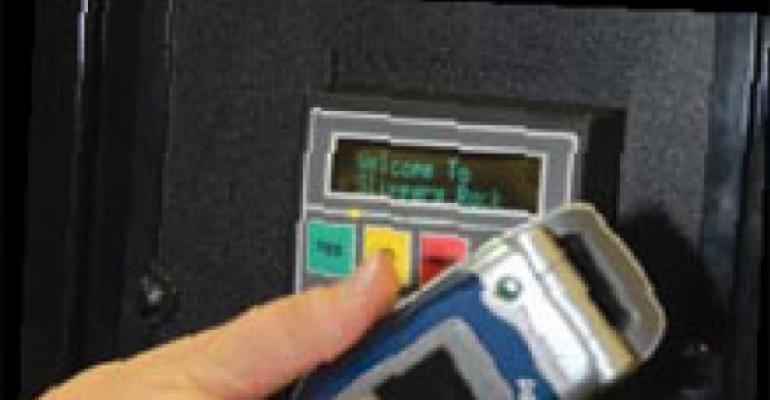 Why is it that college students often forget their wallets, purses and campus cards, but almost never their cell phones?

Who knows? At the same time, that propensity for selective memory is the basis for an innovative campus debit system adaptation at Slippery Rock (PA) University. Students arriving for classes at Slippery Rock this fall were given a small postage stamp sized token with an adhesive backing that is meant to be stuck to a user’s cell phone—either inside the battery cover or on the exterior.

The token is a contactless payment transmitter that allows a user to access his or her Slippery Rock “Rock Dollars” declining balance account to make purchases with a simple wave near a POS reader. The new technology also coincided with the extension of the Rock Dollars program to off-campus merchants.

An Idea Catches On The idea of attaching the payment transmitter to cell phones came during a student focus group. When the students were asked what they had on their persons at that particular time, very few said they had more than a minimal amount of change, and even fewer had paper money, says Barry Welsch, the project manager of the system implementation for vendor Heartland Payment Systems. “But every single one, except one person who had had lost his the day before, had a cell phone,” he adds.

Once cell phones were identified as the natural base for a universally available payment system, the company looked at various options. One was cell-phone-based RFID (Radio Frequency Identification) technology that is growing in popularity overseas, especially in Japan.

However, that was deemed too experimental at this stage for Slippery Rock’s purposes (for more on such futuristic technologies, see the January 2007 FM). The tags affixed to cell phones seemed a more reasonable alternative, marrying the ubiquity of the cell phone with a proven technology.

Through mid-September, about 5,000 students, faculty and university staff received the adhesive-backed tokens. The adhesive is reusable so the tag can be removed and put on another phone if needed.

To make a payment, users wave their cell phones (or whatever the tag is attached to) near the reader. It then quickly debits the account and prints a payment slip that shows the amount of the transaction and the remaining balance in the account. Users can also check their balances and transaction records, as well as reload their Rock Dollars accounts, online at any time.

For most retail transactions, a user must punch in a PIN. This is not required for accessing vending machines and copiers because of the small amounts involved, but, as a security measure, each account has a daily limit on the amount that can used in non-PIN transactions.

Rock Dollars can be used at 380 different points across campus, from retail food outlets and the bookstore to the laundry, vending machines and copiers. In addition, more than 20 off-campus merchants and service providers have signed up to accept Rock Dollars. They range from restaurants and hair stylists to the local supermarket, a gas station, a tanning salon, a dentist’s office and even a tattoo parlor.

Giving Back One unique aspect of the Rock Dollars program is a transaction fee of 1.5% levied on each purchase that is donated to a charity designated by the student. Alternately, the student can choose to have this money rebated to his/her account.

Through the first 30 days of the program, 2,710 users had activated their accounts by selecting a PIN number, and a total of $357,991 in funds had been loaded into the accounts (some of this was transfers from pre-existing Rock Dollars accounts or automatic cash transfers from financial aid packages).

HDS processed more than $250,000 in Rocks Dollars transactions over that period, with the volume growing steadily, Welsch says. “The on-campus dining halls and quick serve locations are some of the most popular locations for using the card,” he notes.

Initially, use of the contactless tags was hampered by the lack of readers set up at some major transaction points, but once that was straightened out, use of the option began to grow.