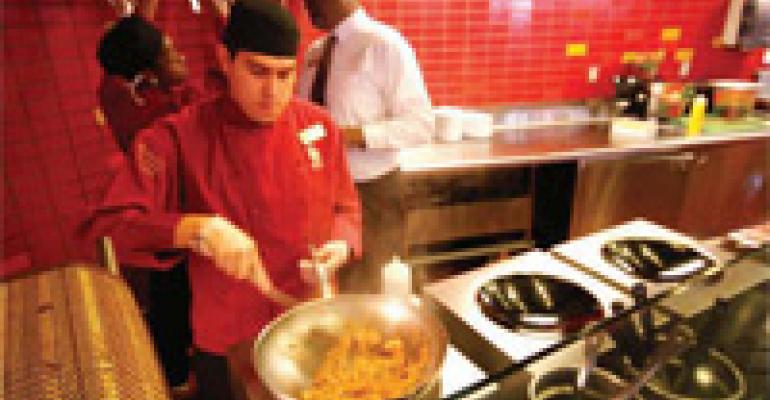 Fast food used to mean an operation that could serve guests quickly because it prepared food ahead of time and held it in warmers or steam tables until ordered. But today, customers are more demanding. They want their food fast — but also prepared to order and freshly cooked, toasted, or heated, and often, right in front of them. In high volume environments, that means really fast cooking if the operator is going to keep up with demand, and it's been a real challenge for cooking equipment manufacturers. This month I'll take a look at some of the equipment they've developed to meet this demand.

One item that has taken the foodservice industry by storm is the “accelerated cooking oven.” In a few short years, these ovens have become a core equipment item in several QSR chains, at least two hotel chains, and numerous onsite dining operations.

The industry has now moved to the next generation beyond convection and even typical impingement type ovens like conveyor pizza ovens. Accelerated cooking oven technology combines some of the best features of the convection oven, microwave oven and the impingement oven to create some of the fastest quality food-producing units ever introduced. This new generation of oven is still being refined and still finding its place in today's kitchens, but it is clear that these new high speed, multi-task ovens can cook a wide variety of products and cook them faster than anything previously on the market. They promise to deliver food so fast it will change the way operators think about producing and menuing food.

Because of patents on the new technology, each company has its own twist on how to “speed cook” food. Two of the more popular cooking methods use combinations of cooking types. One style oven made by several companies combines the use of microwave radiation with forced air convection, similar to that in an impingement oven. In them, super heated air is forced over the food to brown the outside for taste and appearance. At the same time, microwave energy is added to penetrate the food and heat it through before the circulated air can penetrate.

Other oven types use infrared radiant heat in addition to other heating sources. Similar to the microwave hybrid oven, heating is fast and virtually no preheating is required. The units cook in a fraction of the time of conventional ovens.

Determining how best to take advantage of such high speed cookers may be the most difficult challenge facing operators who want to use them. The units are generally small and can be easily fit into existing kitchens. They can generally be installed without an exhaust hood making installation of electrical power the only utility consideration. As an operator you need to work with an equipment supplier and may even want to arrange to try out a demonstration oven to ensure this is the product for you before you spend the sometimes large amount of money required for one of these units.

These cookers do have some limitations, including cost. The price tags may run up to as much as $10,000 or more. You also need to weigh the payback of cooking speed versus cost for your individual operation. The units are also not a replacement for all your cooking capacity. They may have limitations in volume of product cooked simultaneously but some of the lack of volume is offset by sheer speed of operation. Users will need to experiment with recipes to determine how to adapt cooking time and temperature for a specific item with the unit under consideration.

Another item that has become widely used in restaurants in recent years is the induction cooker. These small, approximately 14" square countertop or in-counter units work like this: A power supply generates a magnetic field through a coil located under the ceramic top of the unit. When an iron or magnetic metal pan is placed in the magnetic field, currents are induced in the ferrous metal of the cooking utensil and instant heat is generated due to resistance of the pan. Heating is instantaneous and can be regulated by output control buttons.

In addition to being super fast, induction units are also super efficient: nearly all of the electrical energy consumed is converted to heat in the pan. High powered induction units have even been shown to be faster than gas burners in cooking tests. Induction is also more energy efficient than gas or conventional electric heat.

And, since almost all the power consumed goes directly into the pan and not into the surrounding area, air conditioning and hood exhaust requirements may be reduced when compared to those required for conventional cooking sources.

Induction is widely used on buffet lines and in some kinds of demo stations and is well suited for an omelet station or a stir fry area in a cafeteria or buffet outlet. It is also far safer than open flames in these close customer contact areas. On the buffet line, induction is also excellent as a chafing dish warmer.

Many operators believe falsely that using induction means you will not need an exhaust hood. You should be aware that although it is true in some places, in many locations you will need a hood and technically a hood should be provided whenever cooking is done. In a few instances you will even need a hood over units intended to warm buffet items, since technically you could cook there even though it would not make sense in most layouts.

One manufacturer has developed a unit that has been accepted by local code authorities just about everywhere. This induction warmer has several fixed temperature settings limiting the temperature at the maximum setting to just over 200°F. There is also an induction unit made for wok cooking with a curved bowl cooktop. Watch for other innovations in induction cooking in the next few years, including more heavy duty back-of-house production equipment. Induction is an up and coming technology and holds much promise in terms of future applications.

Another recently introduced innovation is geared specifically for those with grilled sandwiches or paninis on the menu: a sandwich grill with microwave heat in addition to contact heat from the grill plates. The microwave addition ensures a sandwich is heated through without a cold center while reducing grilling time significantly.

Many sandwiches can be heated through and nicely toasted in less than two minutes. The finished product is every bit as good as a sandwich grilled on a traditional unit for five minutes. The equipment was introduced in Europe and made its way to the United States last year. The new sandwich grill is expected to make inroads with QSRs and locations like airports and food courts.

Most importantly, the new high speed cookers fill a need for many operations in that they allow them to serve a high quality product faster. Manufacturers of this equipment promise additional improvements, a greater variety of products, and more user friendly features in the near future. Keep watching for them.

Dan Bendall is a principal of FoodStrategy, a Maryland-based consulting firm specializing in planning foodservice facilities. He is also a member of Foodservice Consultants Society International. Bendall can be reached at 301-233-5226.