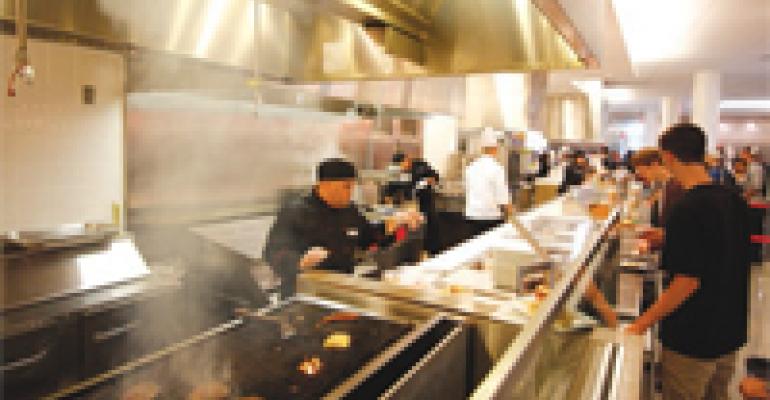 What you need to know to select the right range for a commercial kitchen.

Ranges and cooktops are the heart of the production area of most kitchens. These are generally rugged, heavy duty pieces of equipment made to withstand years of use and abuse. Don't expect a lot of sexy features, just something to get your production cooking done. The basic equipment and function of ranges is the same as it has been for years: they must still do a yeoman's job and do it well.

The range and cooktop category includes all equipment where food is either cooked directly on a cooking surface or in a vessel situated on the surface. This includes griddles and broilers, open burners, hot tops, induction units and wok ranges. There are several equipment types or specific features within each of these basic categories for certain cooking applications. You should know about and will want to consider some of these specifics in order to make the purchase decision that is right for your operation. Here are some things to consider in each cooktop category.

Griddles are steel plates upon which product is cooked and seared directly. Griddles come in lengths from 12" to 72" with larger lengths having multiple heating zones. If you need accurate temperature control, choose a unit with a thermostat (not a standard feature of many models). Also ask about the thickness of the steel griddle plate. The thickness is generally an indication of how much heat is retained and how quickly the griddle will recover temperature when cooking repeated batches of product. A few griddle manufacturers have grooved plates used to simulate the marking of a broiler. Another feature to consider is a chrome plated top available from a few makers. The chrome top is a shiny surface that is easier to clean than the typical steel top and also operates at a somewhat cooler temperature because manufacturers claim the chrome retains some radiant heat.

The plancha is a new item to the US market which uses some of the characteristics of a griddle but may also be used as a hot top. Its unique feature is the ability to have several distinctly different temperature zones in close proximity on the same cooking plate. Many chefs like the ability to move product around to these zones in the course of cooking.

Broilers use open grates to directly cook foods, especially meats. A broiler can be underfired, meaning the heat source is under the grate as in a charbroiler. Some underfired broilers use ceramic stones heated by flames while others use steel radiants. Both types can broil a nice burger or steak — the choice is a matter of opinion for your chef.

Many chefs will say the best steaks are cooked in an overfired broiler. As the name implies, the heat comes from above with the food product between the grate and heat source. Some of these units are mostly enclosed - like an oven without a front door - creating an intensely hot cooking chamber to give steaks that perfect sear on the outside and juicy inside.

Surface cooking temperature is not all that easy to control, so the height of the grate from the heat source can be adjusted to get the degree of heat needed on all overfired broilers and some underfired units. Gas is by far the most common heat source although there are some electric units on the market. Wood or charcoal burning broilers are also popular for some cuisines.

Also included in the broiler category are conveyor broilers made for very high production of steaks or burgers and the combination griddle-broiler. The combination unit, sometimes called a “clamshell”, uses a top heating element that can be raised and lowered to speed cooking from the top and bottom of grilled items.

Open burners are just what the name implies — a burner with a gas flame or an electric heating element upon which a pot or pan is placed directly for cooking. There are numerous burner styles available but the main thing to consider is the burner size and the amount of heat produced (measured in British Thermal Units, Btus). If you want a sauté range and will be using mostly 10" pans, you will want a smaller size burner. These are typically found in 36", six-burner ranges and other burner count configurations. If your application is for large pots, you may want something like a 36", four-burner range, where the burners are farther apart to permit more effective heating of larger pots and pans. Typical Btu ratings for open burners on heavy duty ranges is usually between 20-33,000 Btus per burner. Lighter duty or restaurant ranges often have less robust burners in the 15-30,000 BTU range.

Wok ranges are a specialized type of open burner made for a bowl-shaped wok. Wok ranges or Chinese ranges are noteworthy because they have a specialized, single burner made to create intense heat. Typically, these burners create a focused, 2000°F temperature for extremely fast cooking. These units can be purchased with one to four or more wells or chambers (one for each wok). Wells also come in a variety of sizes for different size woks.

The types and complexities of wok ranges could be the subject of a book. There are East Coast, West Coast, Hong Kong, Chiu Chow, Guangdong, and Shanghai range types, to name a few. Suffice it to say, if you are in the market for a Chinese range your chef is sure to have an opinion on the type he wants for his specific, regional cuisine.

Induction units are a type of open burner that uses a different technology to produce heat. These units are as fast as gas, powerful, and don't add waste heat to the kitchen. The magnetic field generated at the plate surface heats pans that have iron content in their bases, causing the food in the pan to cook. The “burner” itself does not get hot and neither will anything else on the burner other than the iron-containing pan. When the pan is removed from the unit, it will automatically shut itself off, thereby conserving energy. This should reduce air-conditioning loads in the kitchen because there is no flame or waste heat other than that transferred directly to the cooking vessel and food.

Sometimes called “even heat ranges,” hot tops feature a flat steel surface used to heat pots and pans, even though it is not a surface upon which food can be cooked directly. Hot tops are usually operated at temperatures higher than griddles. These ranges are not as popular today as they are one of the least energy-efficient range types. To use the unit for one pot, you need to heat the entire surface, and much of the heat is wasted. The advantage of a hot top is its flexibility in being useful for pots and pans of all sizes and shapes.

Increasing Range Top Performance by “Thinking Out of the ‘Pot’”

Sometimes a fairly small yet unique innovation can make a very big difference—think of fishing line to make the Weed Wacker possible—and we marvel that no one thought of it before.

Well aware that chefs like to cook on gas ranges but that this is not necessarily an energy efficient method, West Coast inventor Lee Huang determined to come up with a “simple” solution to improve oven top efficiency. Applying his knowledge of physics and engineering, about three-and-a-half years ago he designed a prototype of what is now on the market as the Turbo Pot. Custom-designed fins he constructed for the bottom of the pot became his “secret ingredient.”

Huang, now the owner of Eneron in Palo Alto, CA, aimed to improve the process. He knew that in computers, high power lasers, and even in motorcycles, so-called “heat sinks” are integrated into the designs where heat buildup is a problem and used to facilitate heat transfer away from the critical component area.

They are usually designed with fins and strategically placed mass. In a computer, for example, a heat sink absorbs the heat generated by microprocessors and then carries it away via the larger surface area of the fins.

“In cooking, it is the other way around,” he explains. “We wanted to use a heat sink to absorb heat from the flame and more efficiently transfer it to the metal frame of the pot. By building the heat sink into the bottom of the pot, we increased the efficiency of cooking on a gas stove.”

By 2008, Huang’s Turbo Pot was in test with FSTC (it’s listed under “Range Top” on www.fishnick.com) and the Carrabba’s Restaurant Grill chain (part of the Outback Restaurant Group) has been testing the pots throughout its 240 locations for more than a year; other major chain locations are also reportedly on board.

“Operators save energy in two ways,” Huang explains. “They can operate the Turbo Pot in speed mode or savings mode. For speed mode, you use the burner on high power and cut the cooking time 30% to 50%. In savings mode, you cook at a normal pace but dim down the burner by 30% to 50%. For example, Carrabba’s—which is using 81⁄2 quart-size pots for cooking pasta—asked its range manufacturer to change the burner orifice on its stoves so the BTU rating is down from 30,000 BTUs to 15,000 BTUs, and that’s saving energy.”

Huang is also pleased to note that the pot is “green” in the carbon footprint reduction sense: “The energy used to make the fins [the actual construction] can be offset by eight to ten hours of commercial use, so it’s a very green thing. Carrabba’s also estimates it is saving millions of pounds of CO2 [emissions] annually throughout the chain.”