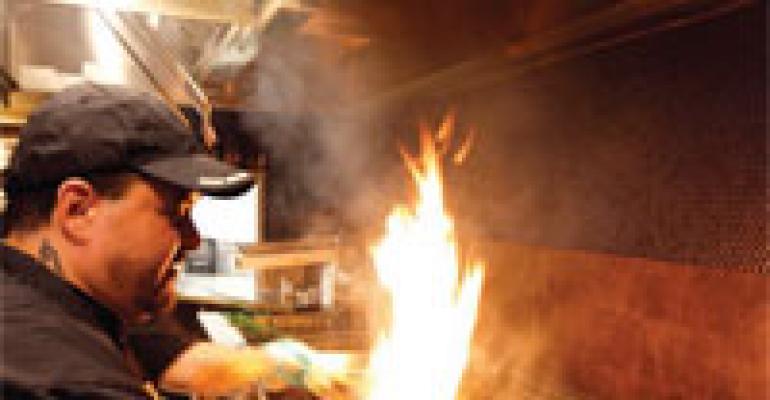 What You Should Know about Commercial Ventilation & Exhaust Hoods

Careful specification can increase comfort and safety while reducing costs.

Exhaust hoods are one of the least appreciated and more misunderstood equipment items in the kitchen, yet they are one of the most important. They help make kitchens more comfortable for the people who work in them, pull out air contaminated with heat, smoke, and cooking fumes and help keep kitchens safe. By removing grease and combustion byproducts with their integral fire suppression systems, they remove a serious potential hazard.

Without proper ventilation, no kitchen can operate efficiently. At the same time, exhaust hoods are usually one of the biggest energy hogs in the kitchen. Why? Because hoods also pull out much of that air you have just spent a lot of money to heat or cool to keep your customers comfortable.

In fact, exhausting all that air actually works against your efforts to keep your dining room at the right temperature. Many estimates suggest that as much as 75% of a restaurant's heated or cooled air is sucked out through its exhausts. Heating or cooling new makeup air is just additional expense.

So if there are ways to reduce the amount of exhausted air while still removing smoke and fumes, you can save your operation a lot of cash. When investing in an exhaust system, this is one of the more important things to keep in mind.

The primary objective of the exhaust hood is to remove contaminated air from the area around cooking equipment. This can only happen effectively if an air “curtain” is created around the cooking equipment surface up to the point where air enters the hood. The curtain effect is created when exhaust air movement reaches what is called the capture velocity. At that point, the curtained area captures smoke and heat so it doesn't spill out into the rest of the kitchen.

The critical part of removing contaminants is the effectiveness of the air curtain down at the cooking surface, not the actual volume of air moving up to the exhaust hood.

The secondary objective of the hood is to remove grease from the exhausted air before it contacts the building's ductwork and exhaust fan. All exhaust hoods have some sort of device for removing at least some small particles of grease from the air stream. More expensive hoods have fixed baffles that cause the air to whip around inside and throw out grease particles by centrifugal force. These are generally considered more efficient in removing grease. Less costly hoods use removable filters to trap grease particles. Removable filters are somewhat less efficient than most fixed baffles although acceptable for most applications.

At the basic end, hoods or ventilators can be purchased for about $500-600 per foot of length, while premium automatic-wash styles can be nearly three times that. The costs add up quickly: a typical configuration of five appliances will require a 16-17 foot hood, a fire protection system, ductwork and an exhaust fan, with the entire package costing $15,000 on the low side and often much more.

What's the difference? In short, how effective a model is at extracting grease from the exhaust air stream and how difficult it is to clean the unit (or whether it cleans itself). The amount of air a given size hood needs to effectively remove smoke and odors also plays a role in the cost.

Hoods engineered to remove less air while providing effective “capture” are generally more costly. Some owners are willing to pay the premium because it reduces their heating and air conditioning bills and the payback over time will wind up saving money.

In all cases there must be an automatic fire suppression system in hoods over most types of cooking equipment. New requirements call for more fire protection than that required in older installations, so be prepared to change or enlarge your system to meet current regulations to satisfy authorities, especially if you make a change in even one part of a cooking line up. New suppression system are costly, usually several thousand dollars, and often require down time during installation.

Hood maintenance requirements depend on the type of hood you buy. They don't require mechanical maintenance since they have no moving parts, but they must be kept clean on a daily basis. More expensive hoods have water wash features which do much of the cleaning for you with a timed hot water and detergent spray wash of the interior of the hood. They are more costly than the typical hood initially but may pay for themselves in areas with high labor costs. (In making such a calculation, also consider the cost of the special detergent required and any plumbing or drainage modifications that may be necessary).

Removable hood filters over grease producing areas should be cleaned daily either manually or in a dishwasher. Ductwork also requires regular maintenance to prevent it from becoming a potential fire hazard. The National Fire Protection Association (NFPA) suggests inspection of the fan and ductwork every six months by a qualified vent cleaning service.

The latest improvements in hood technology and the strategic placement of make-up air inlets can make a huge difference in the amount of air that needs to be exhausted. Just about all operations should also consider variable speed fan controls which monitor the air entering the hood, making adjustments when little or no cooking is going on. Some of these units monitor temperature in the hood and others may also monitor smoke to sense the need for more or less exhaust. Many operations have shown paybacks of a year and even less for such systems.

Other new designs focus on reclaiming waste heat from the cooking process. One manufacturer has introduced hood filters with integrated water lines so that they can preheat water before it gets to an operation's traditional water heater. Another manufacturer has introduced a different approach that transfers air heated by the flue to a part of the hood where it can pre-heat water. Gas appliance flue temperatures can reach 1,000°F, so if only a portion of that heat can be reclaimed it can be worthwhile.

As a final note, remember that hoods themselves don't break, but that fan systems do break down. If you are having trouble contact a ventilation expert. Exhaust systems are susceptible to a variety of external factors such as cross drafts that can influence their performance and impair the capture of grease and smoke laden air.

It is often easy to forget how complex exhaust systems are and how much of an investment you have in them. Don't hesitate to use the service and advice of experts to help you make the best equipment selection or make cost effective choices. Most of all, if you are in the market for a hood, check out the latest in energy saving models — it may be well worth your time.

Dan Bendall ([email protected]) is a principal of FoodStrategy, a Maryland-based consulting firm specializing in planning foodservice facilities. He is a member of Foodservice Consultants Society International.